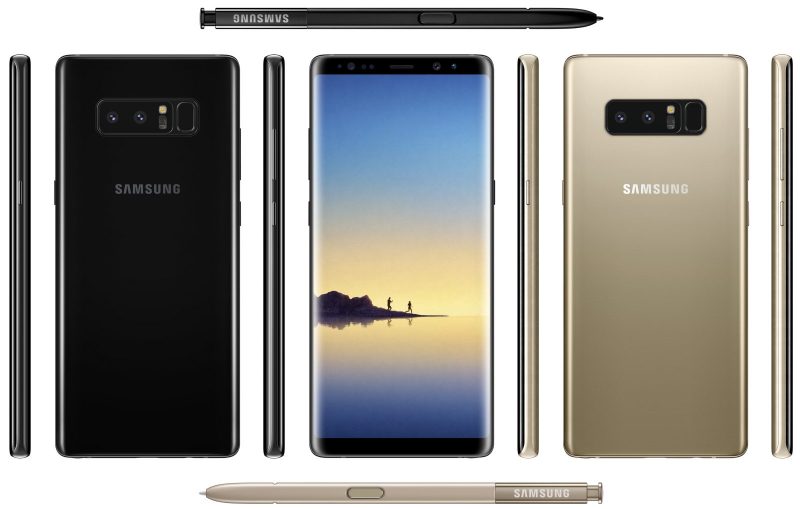 The final specs of Samsung’s upcoming phablet, the Galaxy Note 8, have been leaked by prolific tipster Evan Blass.

Blass writes in a VentureBeat article that according to a person briefed on the device’s final configuration, the Note 8 will be IP68-certified and feature a 6.3-inch SuperAMOLED display, making it just marginally larger than the S8+. Unlike the S8+, however, the corners of the Note 8 are more “squared off,” says Blass, as is typical for the Note line.

Internally, the device will feature Qualcomm’s Snapdragon 835 chipset for U.S. phones (which are usually the variant that Canada receives as well), and the company’s own Exynos 8895 for international models. The processor will be backed by 6GB of RAM — an increase from the S8 — and have 64GB of internal storage expandable by MicroSD.

The camera setup will feature two main rear cameras with 12-megapixel sensors, one of which is wide-angle and will feature an f/1.7 aperture and dual-pixel autofocus. The other camera is a telephoto lens with a f/2.4 aperture and 2x optical zoom. Both cameras have optical image stabilization. Around the front, the selfie cam is 8-megpixel and has a f/1.7 autofocus lens.

Powering all this is a fast-charging 3,300mAh battery that can charge wirelessly or via USB-C.

The phone will reportedly come in ‘Midnight Black’ and ‘Maple Gold’ (shown in the above, previously leaked render), with ‘Orchid Grey’ and ‘Deep Sea Blue’ coming at a later date — though it’s unclear how many of those colours have the potential to arrive in Canada.

VentureBeat previously reported that the phone would cost around  €1,000 in Europe (around $1,500 CAD).

The phone is set to be announced at the company’s upcoming August 23rd event.