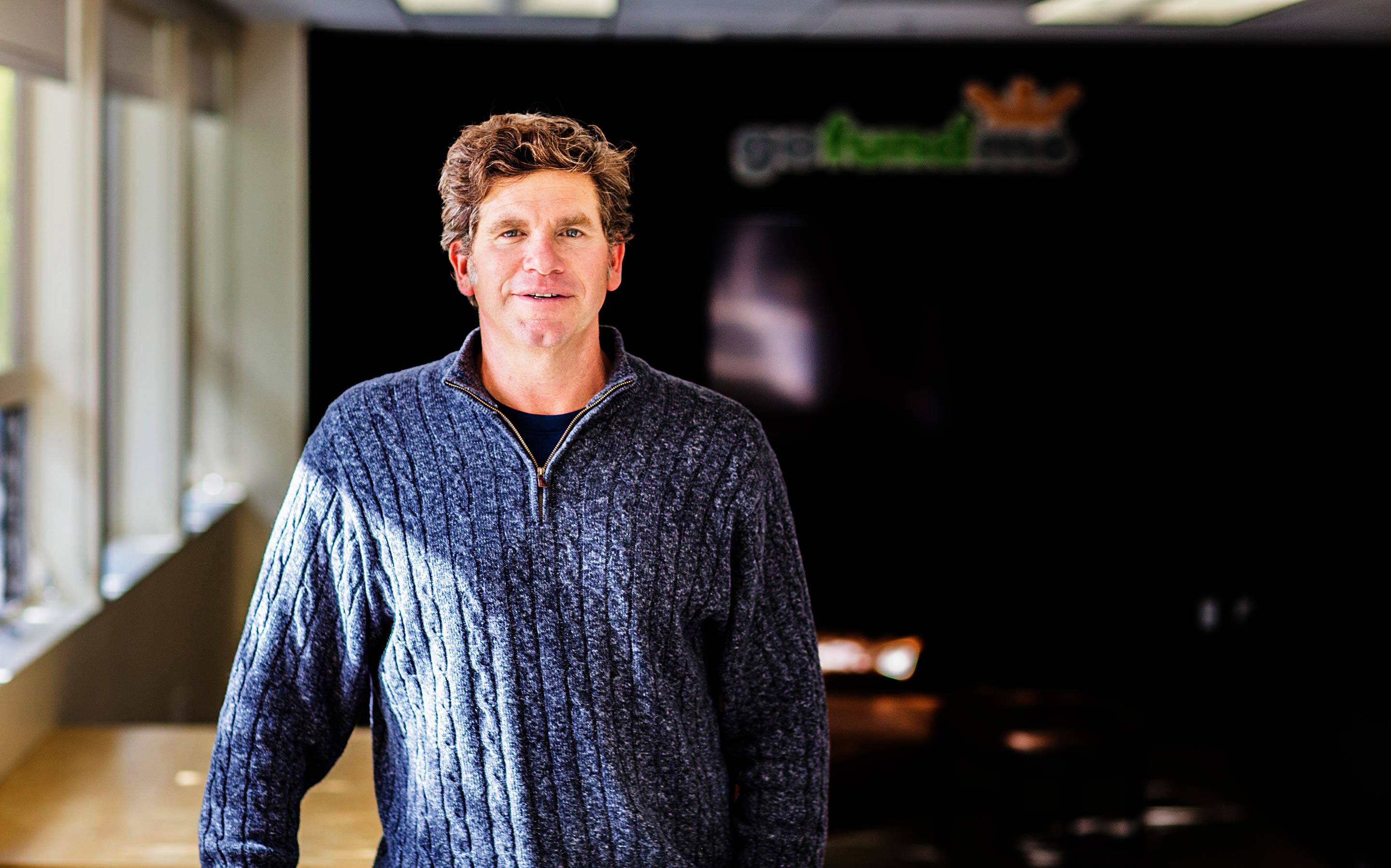 A trip to GoFundMe.com is both heart-wrenching and inspiring. On any given visit you might see the story of two parents both fighting cancer, or a terminally ill child’s bucket list, or a young immigrant suffering a debilitating stroke far from her family.

The inspiring aspect of the platform comes from the love and generosity the stories inspire. Most often, the campaign is created not by the individual, but by someone who cares about them. They do their best to convey the quality of that individual’s character and the direness of their situation. Then, if the story is compelling and the community is strong, the donations begin flowing in, making impossible goals suddenly possible through the power of mass compassion. One of these campaigns is created every 30 seconds worldwide.

That means every 30 seconds someone seeks aid and mercy, and in many cases their pleas are answered, by a group of people — connected somehow or perhaps complete strangers — who help because they can. Those people change a life, and their kindness echoes out from that act of charity and touches many more in its path. That’s what’s known as personal cause fundraising, and it’s the concept that powers GoFundMe.

A new kind of charity fundraising

“What we want to do is give people the power to change their world,” says GoFundMe CEO Rob Solomon in an interview with MobileSyrup. “We’re building a platform that is going to help people change their world, which has a profound impact over time. In the next few years, we’ll have more volume flowing through our platform than the world’s largest charities on an annual basis. Than the world’s largest foundations on an annual basis.”

The growing ease and popularity of personal fundraising is a paradigm shift, and one that Canada is on the cutting edge of, according to Solomon.

“I think that Canada could be one of the largest markets on a global basis. It may not have the population equivalent of some of the larger countries in the world, but from what we can tell, we should get to a place in the next few years when one in 10 or so Canadians will have given to a GoFundMe campaign.”

Those donations will likely be generous, too. Solomon says that the Canadian donor is more giving compared to other markets. The average donation is about $77, versus about $65 in the other countries where the platform operates — the U.S., Australia and the U.K.

“Canadians are very generous,” says Solomon, adding: “A lot of it has to do with the media. Canadians are very engaged with both traditional media and social media and the lifeblood of a successful GoFundMe campaign is people sharing it on Facebook, on Twitter, the local paper, the radio.”

So far, in the little over two years the platform has been active in Canada, it’s brought in $140 million in donations from 1.8 million Canadian donors. In the last year alone, the number is close to $70 million. That’s a small percentage of GoFundMe’s overall volume — in the last year and a half about a billion dollars flowed through its digital gates – but it’s still significant, especially considering Canada is outdoing both its mother country, the U.K., and fellow commonwealth nation Australia.

Is this the future of fundraising?

Given the platform’s seemingly sudden ubiquity (in fact it’s been a six-year development process), it seems fair to assume that in the era of Humans of New York and other viral charitable campaigns, this may be the future of fundraising. Solomon doesn’t entirely agree, however.

“I don’t know if it’s the future necessarily. Giving is a gigantic space. In the U.S. it’s a $375 billion USD market, globally it’s probably half a trillion dollars. I think charities will continue to raise money and do what they’re good at. Saving whales or helping homeless children. The sea change that we’re seeing is that now we’ve democratized organization and fundraising, meaning that anybody can do it.”

In particular, Solomon makes mention of the two women behind the Ethan Faria campaign, a notable Canadian initiative that saw $105,000 raised to help purchase prosthetics for a toddler who lost parts of his limbs after contracting a rare bacterium. Neither of the women were professional organizers or fundraisers, but their campaign was wildly successful. This brings a new element to charity and one that Solomon believes can become a bridge between the traditional model and GoFundMe’s platform.

“I think we’ll start seeing people raising money for traditional charities using our platform. That’s a profound change and we want to drive that as much as possible. What I like about that is that if I give $100 to Sick Kids Hospital, it’s just one donation. If I create a GoFundMe campaign to tell the story of why I’m giving to Sick Kids I can turn my $100 donation into ten people writing $100 checks.”

What constitutes a good cause? 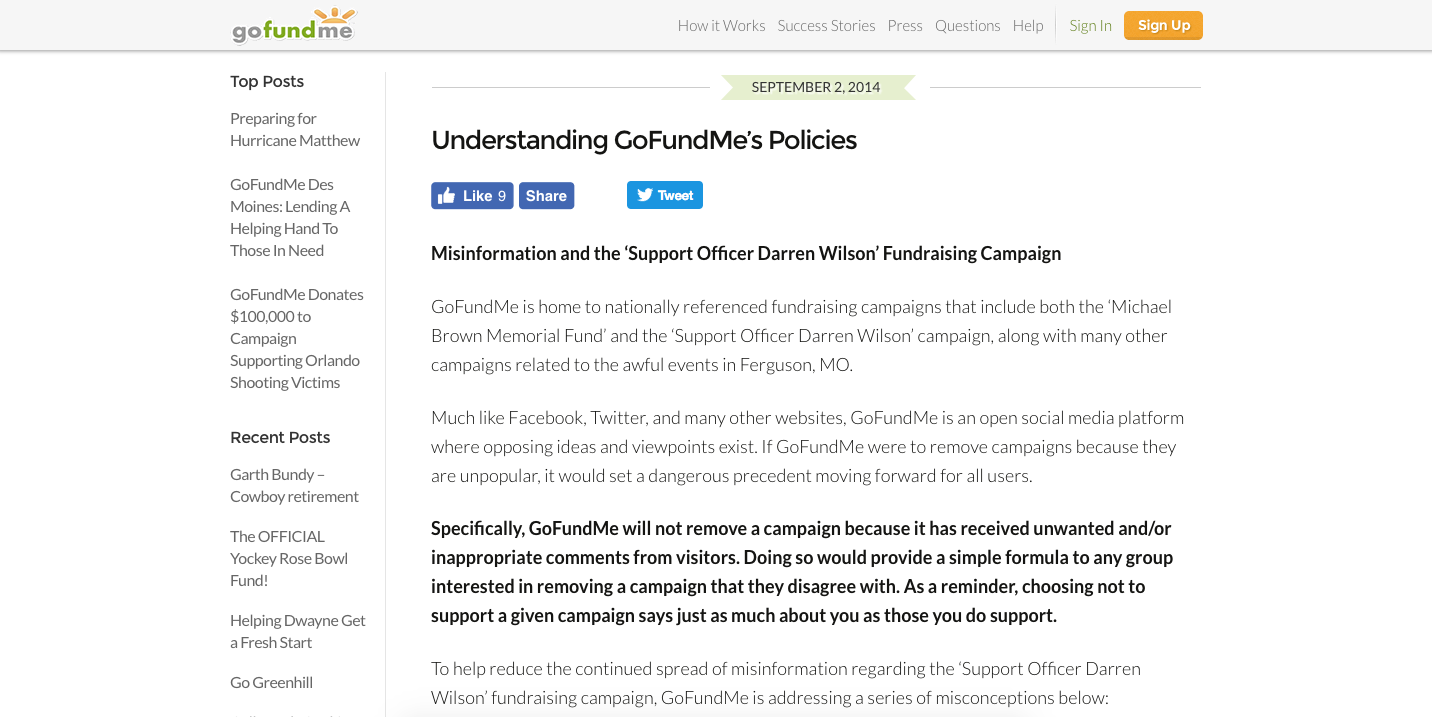 It’s the authenticity and personal touch of these campaigns that makes all the difference, says Solomon. Of course, not every campaign is perfect. Some are riddled with so many spelling mistakes and punctuation errors that they’re difficult to read. Others are controversial — considered charitable by some, and decidedly not by others. Take the campaign for Officer Darren Wilson, the police officer who shot and killed Mike Brown, for instance.

Solomon says GoFundMe aims to keep its policies hands-off, letting the community decide whether or not a campaign is worthy of funding.

“It’s much like Facebook or Twitter. They don’t want to judge the content you’re putting up there. They want you to use the platform within a set of guidelines, we call it terms of service. If someone is violation those terms of service, we want the community to tell that campaign organizer whether they want to donate or not to the cause.”

But while this sounds like it might work in an ideal world, in reality there are issues that crop up — even for Facebook and Twitter. For example, Facebook’s notorious issues with its trending news topics, which were at first identified as having an editorial slant, then advertised hoax articles throughout the most recent American election. Facebook has had to work hard on remaining impartial while retaining an adequate level of quality, and has just rolled out a series of new features and tools to further that ambition.

Toeing the line of impartial platform

In dealing with its own questions of morality and impartiality GoFundMe has nixed legal defense funds.

“It gets pretty complicated,” Solomon offers in explanation, “There are many organizations that help people when they need legal defense and we’ve decided that there’s so many issues that are related that it didn’t make sense for those to run on the platform.”

Polishing campaigns is also something the company avoids.

“We’ll provide guidance and tips and coaching when we see things that could be done better but the more authentic these things are, the better they perform. We don’t necessarily want these things to be well-polished and highly editorialized.”

As for hoaxes, Solomon says they are very rare, amounting to less than one-tenth of one percent. The platform also has a fairly robust system for vetting campaigns. The first line of defense is public opinion, but the company also employs anti-fraud software (both proprietary and third-party) and offers a guarantee that ensures a refund to anyone that feels they’ve been defrauded.

As the platform expands, these issues will tag along, but so will the powerful concept of personal fundraising. The Californian startup expects to launch in Germany, France and Spain in 2017, bringing its platform to countries where no major competitors exist — at least, none that the platform has identified as of yet.

“There’s need everywhere,” says Solomon, “and wherever there’s need, we think that people want to come together and help each other out.”