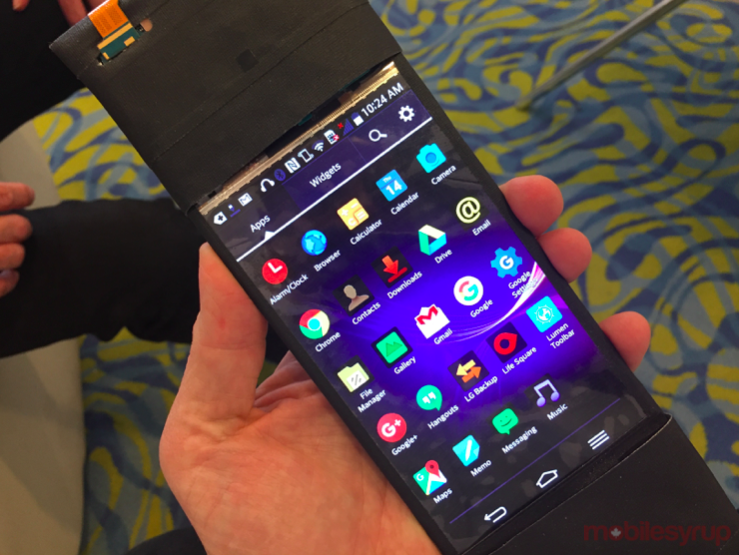 The Motorola DynaTAC 8000x was the first mobile phone and it was massive at 13-inches high and weighted in at 794 grams. Today, smartphones generally come in above the 5-inch mark and weigh 152 grams.

Bendable and flexible smartphone have been teased by manufacturers, mainly by Samsung and LG, since 2011. Both companies revealed road maps that peg the release of a smartphone with a bendable display, which would break a “technology barrier,” by the end of 2016.

Recently, a team of researchers from Queens University made headlines with a flexible smartphone prototype called ReFlex. Dubbed the world’s first full-colour, high-resolution flexible smartphone, the device runs Android 4.4 KitKat and features a 1080p flexible Plastic OLED (POLED) display. The main attraction of the working prototype is not only its ability to bend but the fact that it has a multi-touch pressure sensitive display that gives tactile feedback when users interact with apps.

I’m keenly interested in this next stage of innovation in the smartphone market, something I hope will break the current monotony of device designs.

Today, I hopped on the VIA Rail train and headed to Kingson to interview Roel Vertegaal, director of the Human Media Lab at Queen’s University, to understand his reasons for creating the ReFlex and where he sees the future of smartphone development.

Q: What is ReFlex?

Q: What are haptics?

This is new technology coming out this year, but we’ve been working on it for 12 years. Specifically, this notion of flexible screens taking over the computer world for a long time.

Q: What has happened in the 12-years that has led you to this point?

Roel Vertegaal: Obviously, we would have done this 12 years ago if we had the screen technology, but those screens were just being invented at the time. So we had to literally wait that long before the screens become available.

In 2004, we simulated this kind of thing by projecting an image on paper. You can find it on YouTube. It’s called Paper Windows. In 2011, we came out with the world’s first flexible smartphone. It was tethered and used an E Ink display. We called it Paper Phone. So we haven’t been sitting still. But this is the real deal… this will be the next evolution of computing. 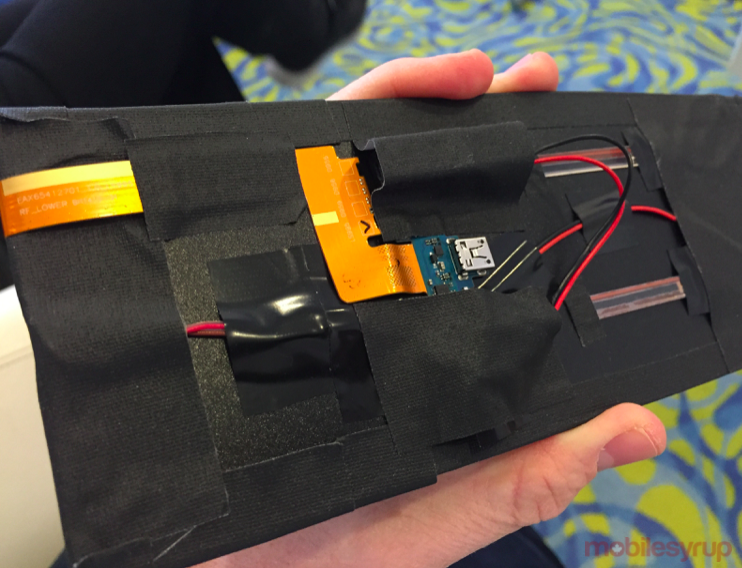 Q: Tell me about this device. How does it work? What specs are in this specific one?

Roel Vertegaal: This is an Android smartphone. It has a 1080p POLED. We basically run Android’s apps on it. What is special about it is that not only is it thin, but is has bend sensors that allow it to know when it’s being bent and how much it’s being bent.

Q: Does the amount of bend dictate how fast the pages turn?

Roel Vertegaal: Yes, it does (the user could also adjust the speed at which pages or images flip). There is also a haptuator, which is like a low-frequency speaker, which allows us to synthesize the experiences directly onto the panel, so you feel the panel vibrate in certain ways. It’s like sound but the vibration of sound.

The panels are circuit boards that drive the display and the battery. The reason we put them off to the side is so we can emphasize the thinness of the prototype. 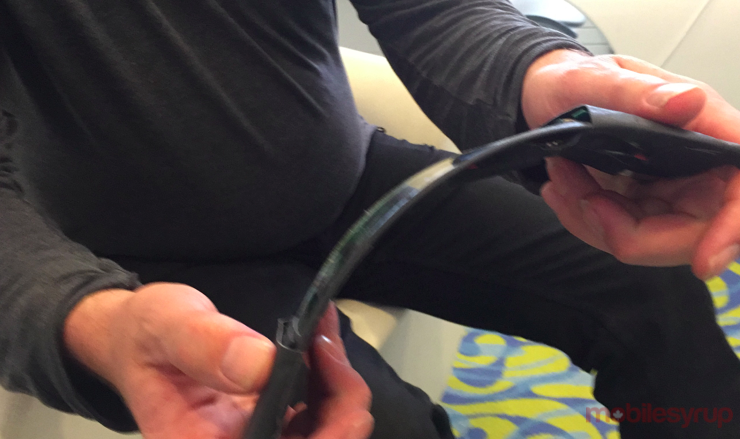 Q: When a manufacturer comes out with something like this, how do you see do you see that device looking?

Roel Vertegaal: It will probably be a little thicker than this. It might be a little less flexible. One of the reasons for that is that if you squeeze this too hard the display will break. What is nice is that I can throw this on the floor — and even probably stomp on it — this is a plastic display so it will not break from throwing it on the floor.

I think that is enough reasons for people to want this. Quite frankly, I think manufacturers are being a bit over conservative right now. This could be in the market today. I think they are worried about making the circuit board flexible, which I don’t think is necessary… that’s the hard part, is to make everything flexible. The main issue is breakability of the screen when you do extreme bends. 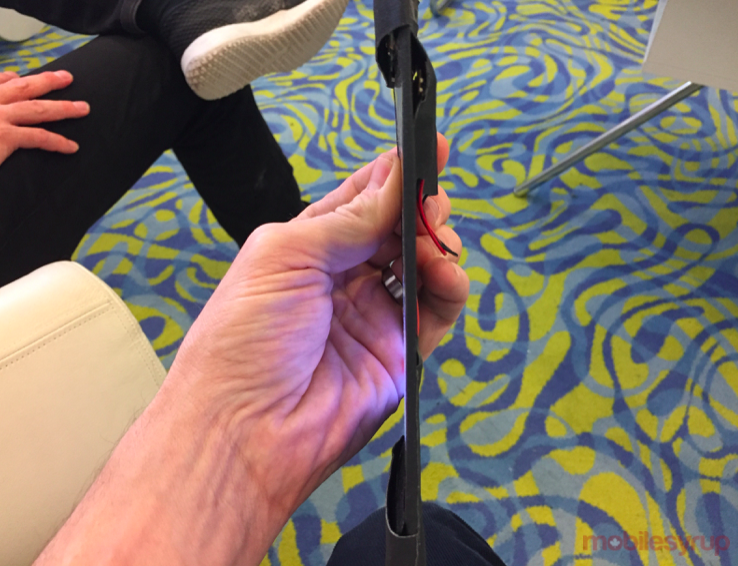 Q: If you put a bendable phone in your pocket, how do you ensure it will not break?

Roel Vertegaal: It would just comply with your body. However, we have not done any tests, of any kind, in terms of breakability. maybe we should start. We are interested in making the innovation. Becoming first.

Roel Vertegaal: You have to do something when you’re a researcher! If you choose to do something as a researcher then you better work on what you think is the most important problems in terms of the widest impact. That’s why we are specifically working on this. Every major innovation in human-computer interaction has been surrounding screen technology. New screens only show up once in a generation.

Q: Who helped you develop this?

Roel Vertegaal: We source the display. It’s an LG display. Other than that we basically built this in-house… whether or not ultimately we are the one’s who commercialize this is beside the point. We just want to make this happen.

Q: This is the next big thing that will make smartphone more exciting 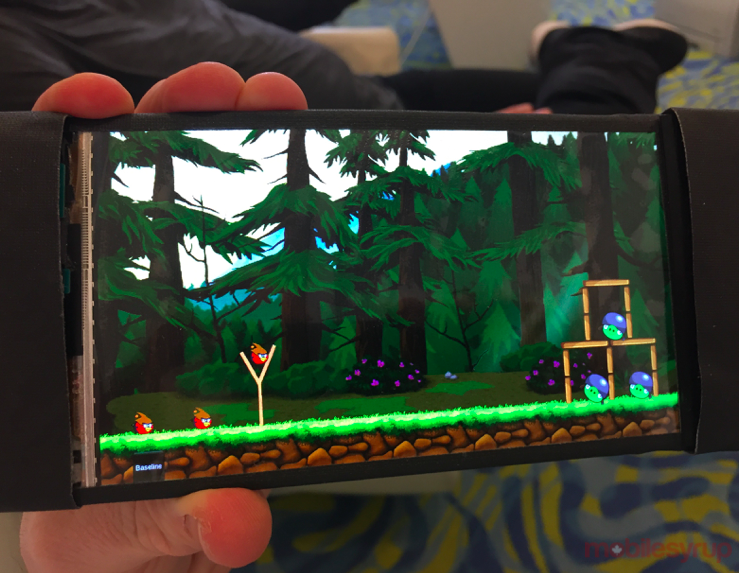 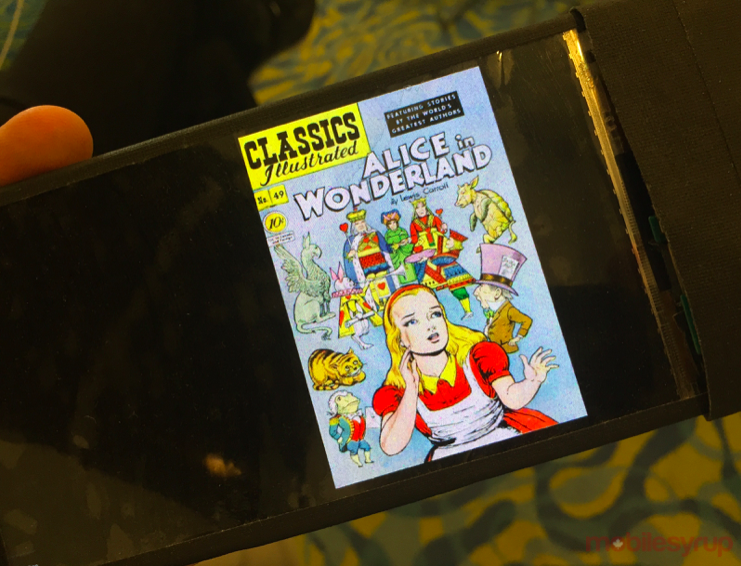