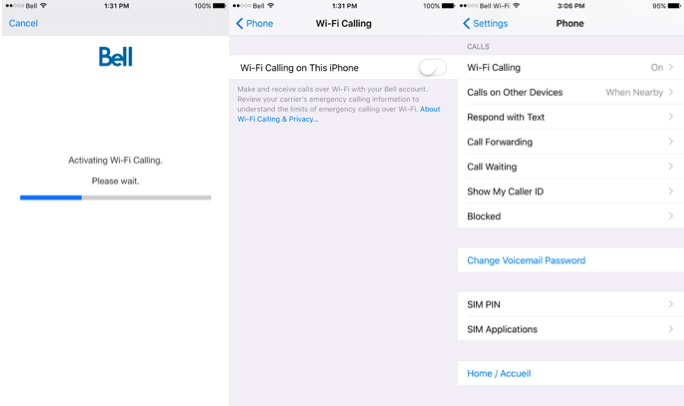 Bell has launched its Wi-Fi Calling feature on iPhones older than last year’s iPhone 6s and 6s Plus. Originally launched back in September alongside Apple’s newest handsets, Bell says that it has expanded the feature to include the iPhone 5s, iPhone 6 and iPhone 6 Plus. Virgin Mobile users can also enable Wi-Fi Calling.

Aimed at minimizing areas of poor call quality through low cellular signal, Wi-Fi Calling routes phone calls through home or public WiFi networks, allowing users to connect in more areas. The feature is especially useful for people that don’t have great cellular coverage at home — perhaps at the edge of a tower, or an overloaded node — and don’t want to resort to other VoIP services. Wi-Fi Calling also seamlessly routes calls between WiFi and cellular without dropped calls.

Bell says the update is only available to iPhone 5s and iPhone 6 customers with unlimited nationwide calling plans, which mainly encompasses those with the most pricey share plans. Those plans rose in price by $5 earlier this month.

To receive the update to enable Wi-Fi Calling, head to Settings/General/About and accept the prompt to update Carrier Software. The latest version is 23.1 for Bell and Virgin customers.