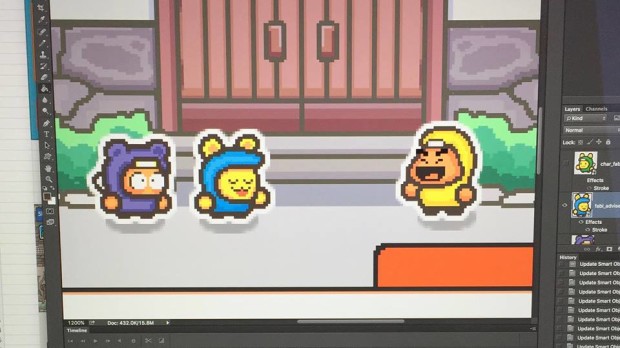 As poorly designed and frustrating as Flappy Bird is, the game evolved into cultural phenomenon, a milestone many mobile games try to achieve, but rarely reach.

Now we know what Dong Nguyen and his Vietnam-based studio are working on next. In an interesting move. .Gears is partnering with Japanese mobile developer Obokaidem, a studio that likely isn’t familiar to most Western gamers, but is behind a number of extremely popular mobile titles that are only available in Japan. Recently released Pick-Xell is one of the developer’s first titles to make its way to North America.

The two developers have joined forces to work on a new title called N Project, which is expected to hit app stores at some point in 2016. Given the high profile of Obokaidem, it’s likely Nguyen is looking to recapture the success of Flappy Bird. While an ambitious goal, mobile lighting striking twice is unlikely given Flappy Bird is one of mobile gaming’s biggest surprises. At one point Flappy Bird is rumoured to have been earning as much as $50,000 USD a day through embedded ads.

All we know about the title right now is that Obokaidem and .Gear’s joint project “will be a Ninja-themed game.” Hopefully Nguyen’s upcoming project is a significant improvement over Swing Copters and the more recently released Swing Copters 2.

.Gears studio pulled Flappy Bird from the the Google Play and Apple’s App Store in late 2014, reportedly because Nguyen felt the game was too addictive. Other speculation indicates the game was removed due to copyright claims. Anyone who has played the game in the past knows that Flappy Bird’s visuals hold a striking resemblance to Nintendo’s Super Mario Bros. franchise.