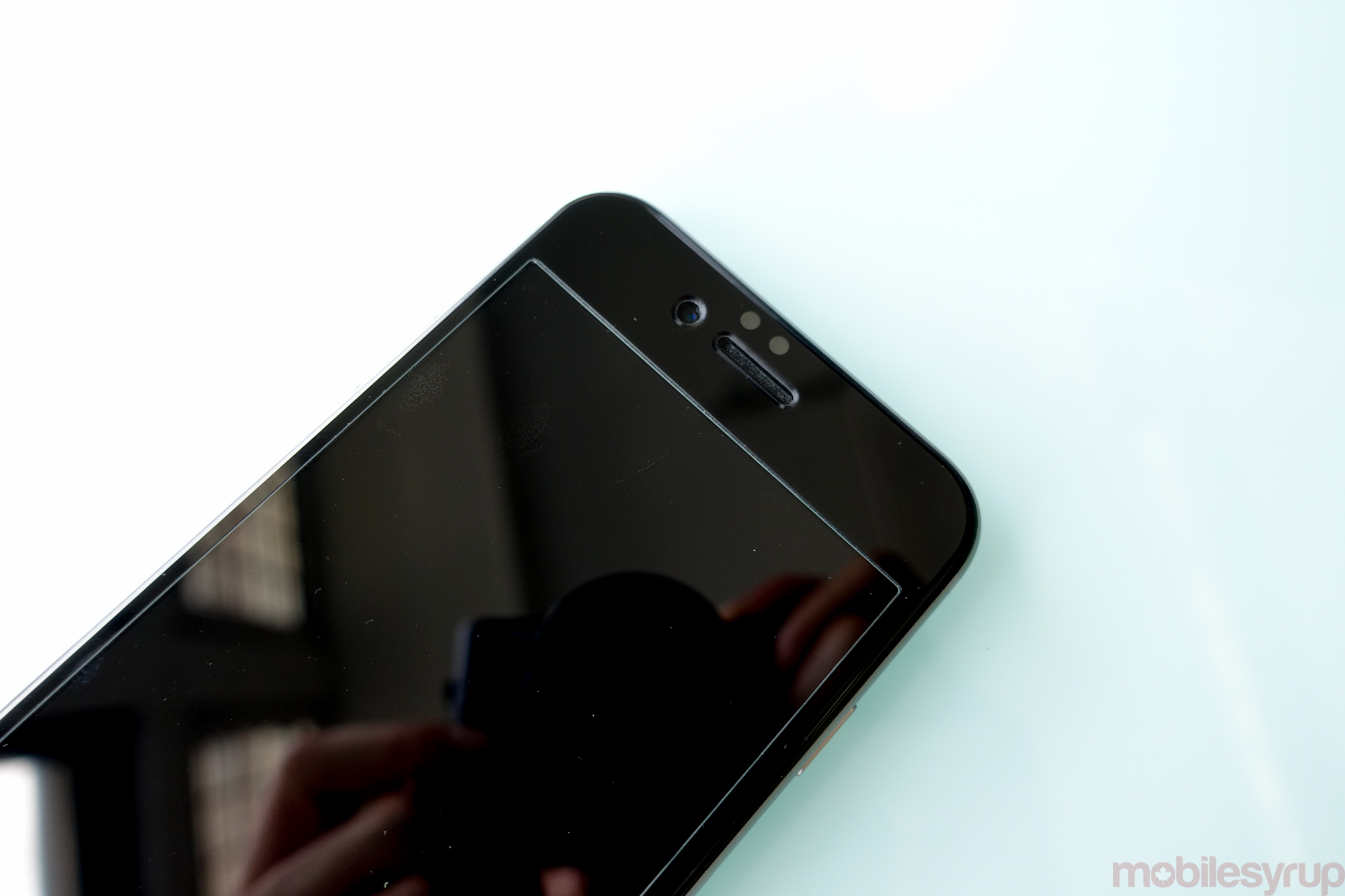 There isn’t much to a smartphone screen cover. I mean, you basically put a piece of something – plastic, glass, crushed-up diamond – on top of the glass that came with your phone in the hopes that instead of scratching it, you scratch the removable, much more easily replaceable other.

In fact, screen protectors have become so commoditized, so ubiqutious, that they now come bundled with almost every case you buy. It’s almost like case manufacturers are saying, “Oh you want to protect that most important part of the device, too? Sure, I guess we’ll help you out with that.”

Like most people, until recently I thought there were two types of screen protectors, plastic and glass, the former being more malleable but prone to scratching, the latter being slightly more expensive but with better longevity. And while at a high level that is true, there are varying degrees of quality within those classes. And in Phantom Glass, I believe I have found the best of the best. 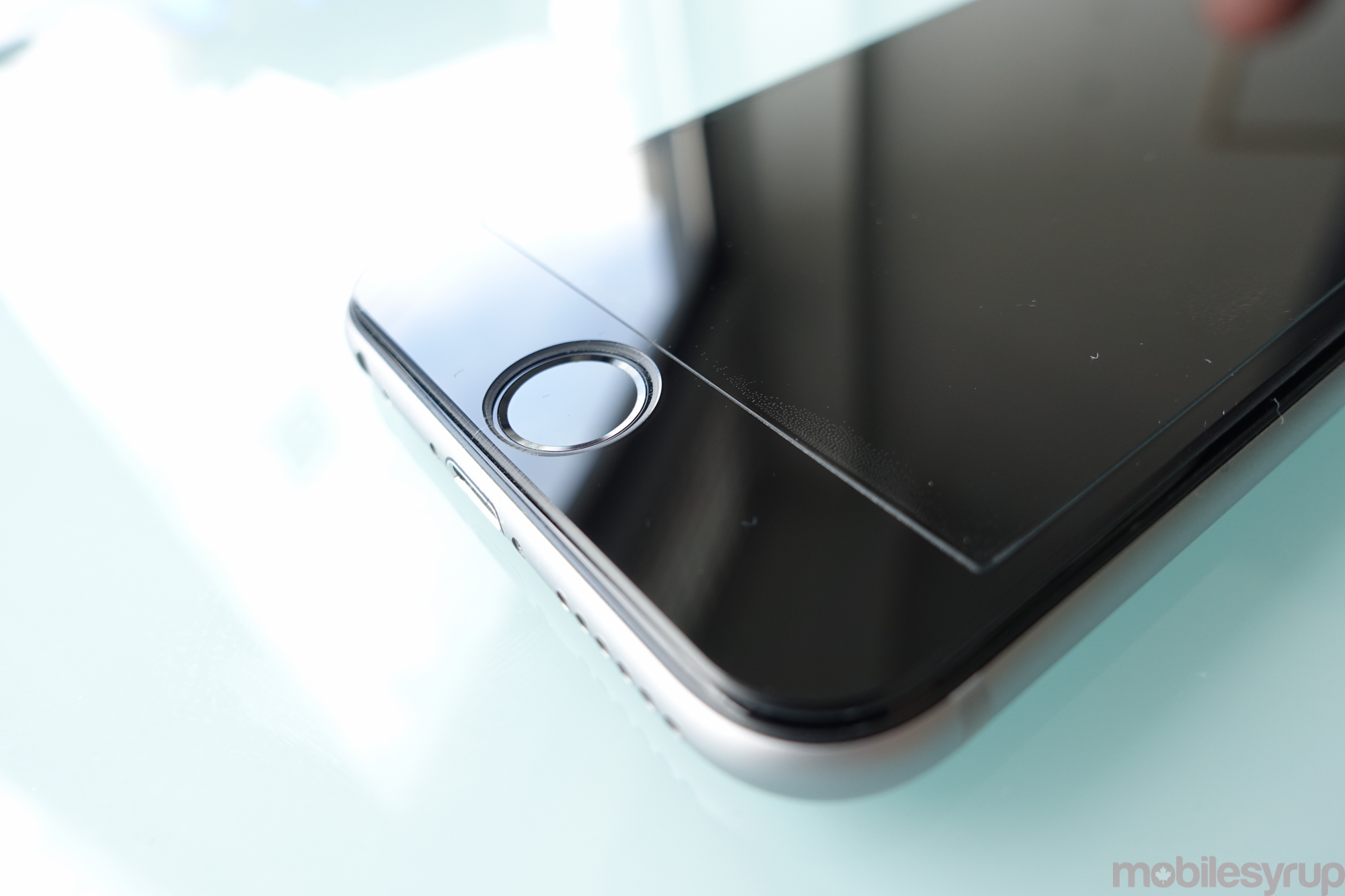 Phantom Glass, from a Toronto-based company of the same name, attempts to address the main quibble most people have with protectors these days: they aren’t very sturdy. Phantom Glass, which comes in a variety of colours and designs for a number of smartphones (here tested on the iPhone 6, the reasons for which I’ll shortly explain), but at its core the product attempts to address a number of faults in many screen protectors, even those made with tempered glass.

The company uses the same Gorilla Glass substrate as the cover found on most modern smartphones, similarly doused with oleophobic coating to protect against fingerprints. This isn’t some cheap coating that will wear off, either: I’ve been using the Phantom Glass for months now, and oil wipes off just as easily as it did when I installed it. It also features, according to the company, “perfect clarify,” that actually minimizes reflectiveness of the screen, and “silicone nano-adhesion” that not only dries, with no bubbles, in 30 seconds, but also fills gaps on your display’s actual glass. I can’t speak to the latter, since I haven’t been able to microscopically confirm this, but the two former points are true: using Phantom Glass is exactly like using your regular touch display; and within 10 minutes the glass was completely devoid of bubbles or residue.

That glass is housed, so to speak, in a bezel that mimics the front of your phone. While that may be distracting, especially if you pair it with a colour unlike your phone’s front, it spreads the impact of the glass to which it is attached, making it easier to install and maintain. The result is that users can add flair through additional colours while protecting their phone’s front at the same time.

The other reason for the  bezel is to make the glass more amenable to cases, since Phantom Glass needs to merely mimic the front of the smartphone. For devices like the iPhone 6, where the display dives convex towards the aluminum casing, this allows the glass to furnish itself properly, preventing a phenomenon that happens all too often with tempered glass covers: they lose adhesion around the edges. 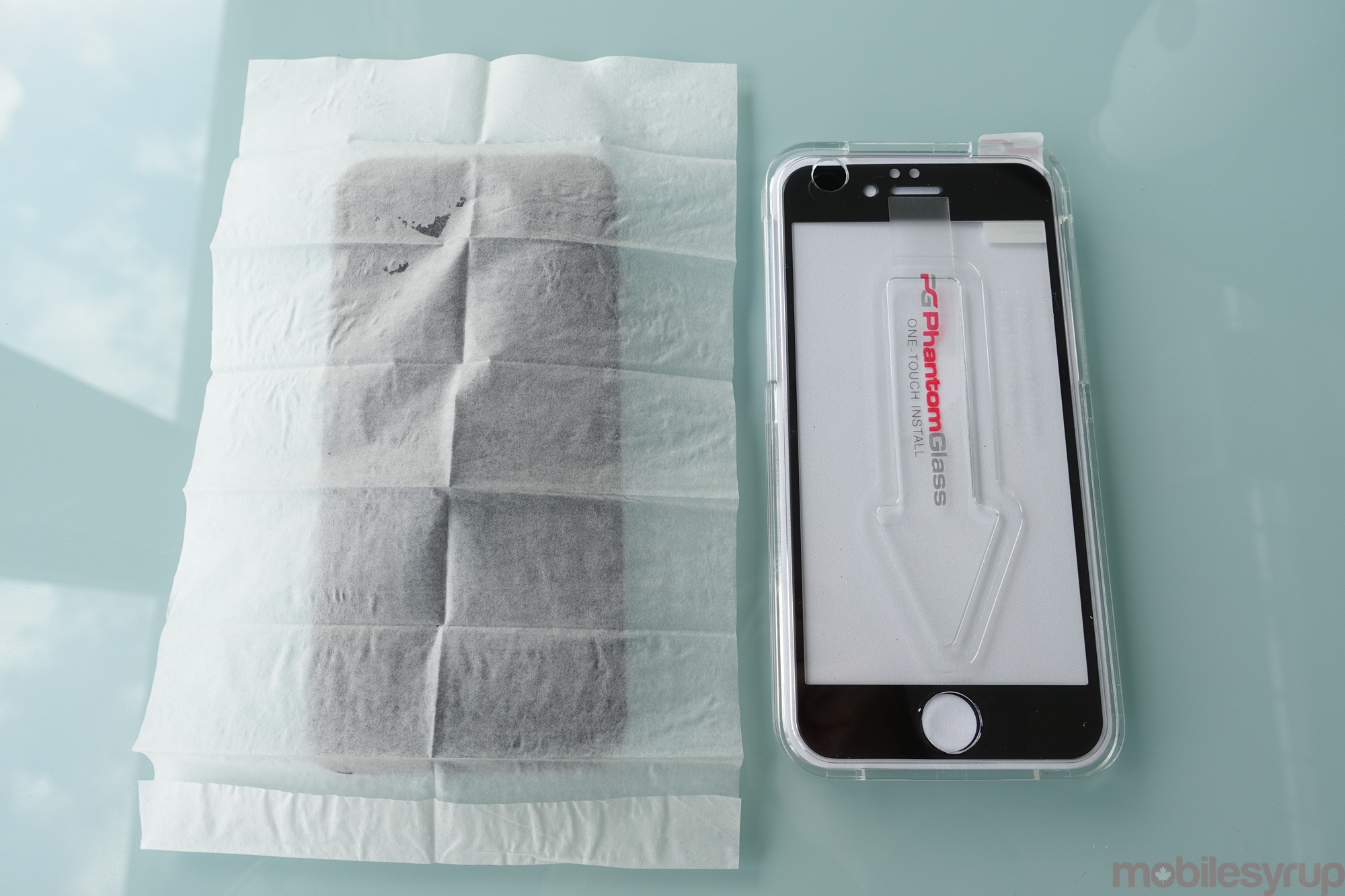 The cover isn’t particularly complicated to install, but alignment, an issue with most protectors, is the key differentiator here.

Phantom Glass comes with a specialized applicator that, once your screen is cleaned, sits over the device, centring it as the adhesive does its magic. The box has clear instructions and an alcohol swab that doubles as a nice face cleaner when you’re done (note: do not do this). 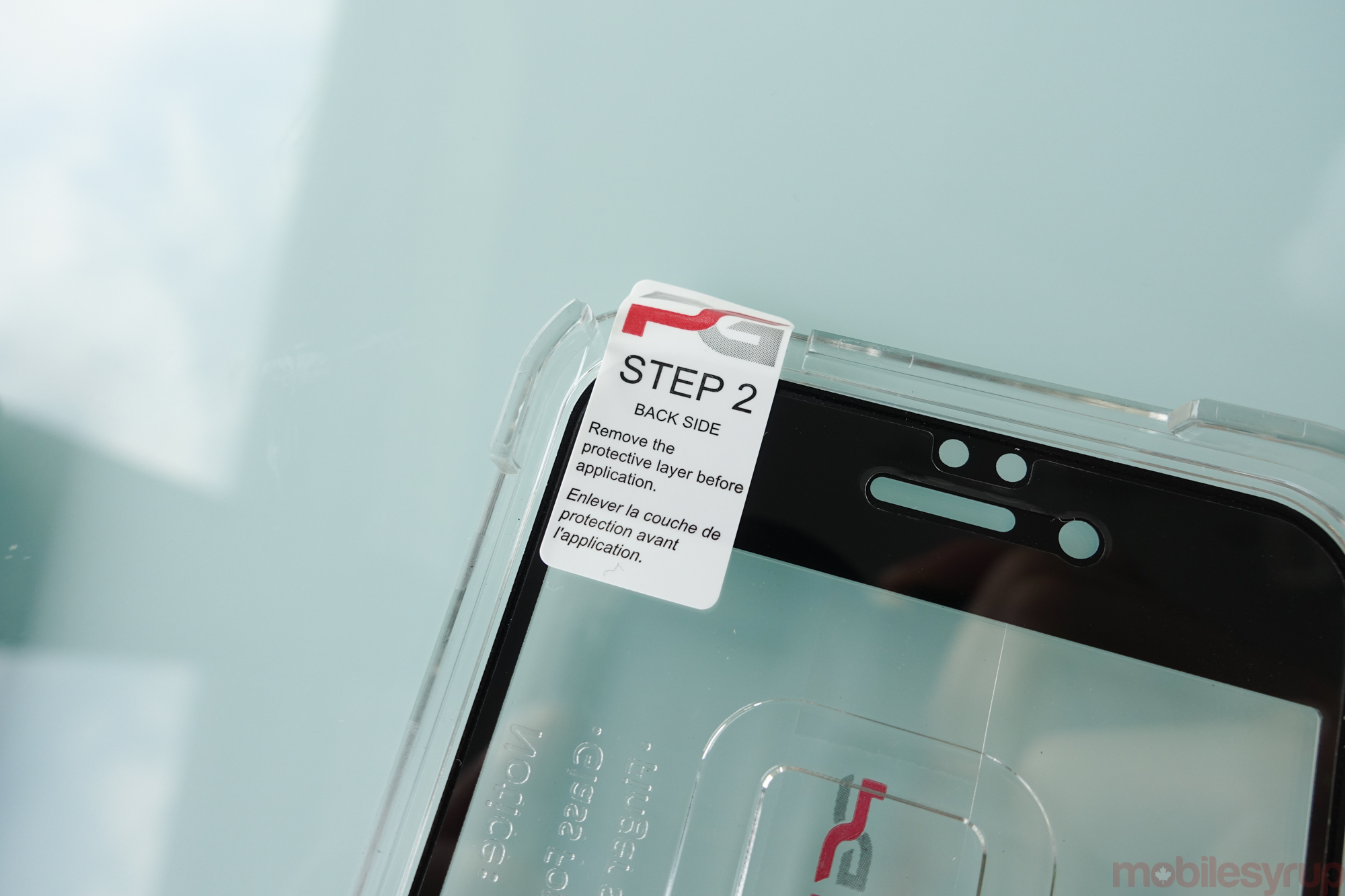 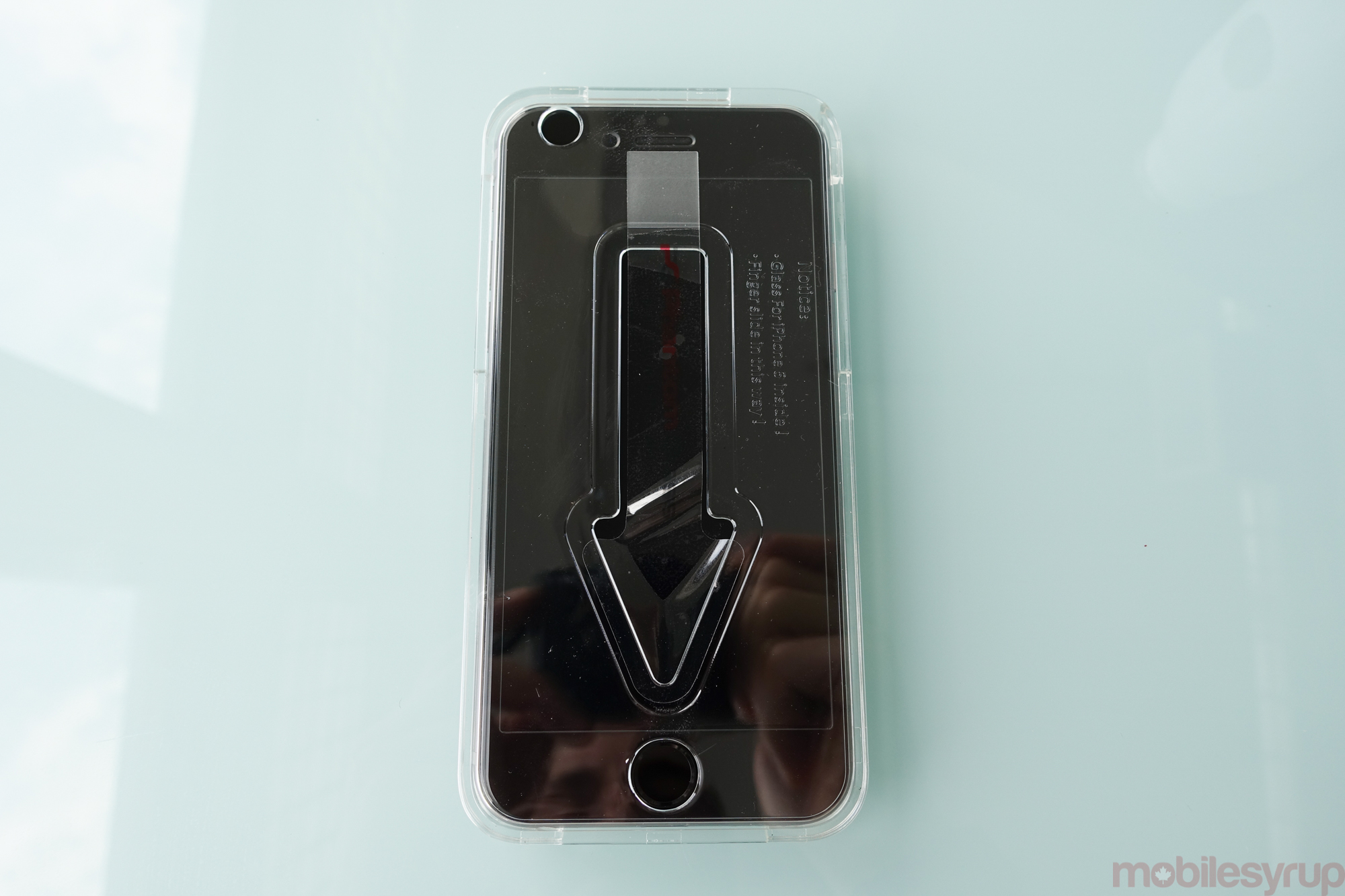 Despite the guide, each time after installing the case on a number of iPhone 6 and 6 Plus units, the glass was not aligned with the home button, forcing me to remove and manually reposition it.

It wasn’t off by much, but glass is not the most malleable of materials, so I had to remove the entire piece, largely defeating the guide’s purpose. Thankfully, reapplication did not cause any bubbles, but I’d advise you to be extremely careful when positioning the guide and removing it once the adhesive has taken hold. 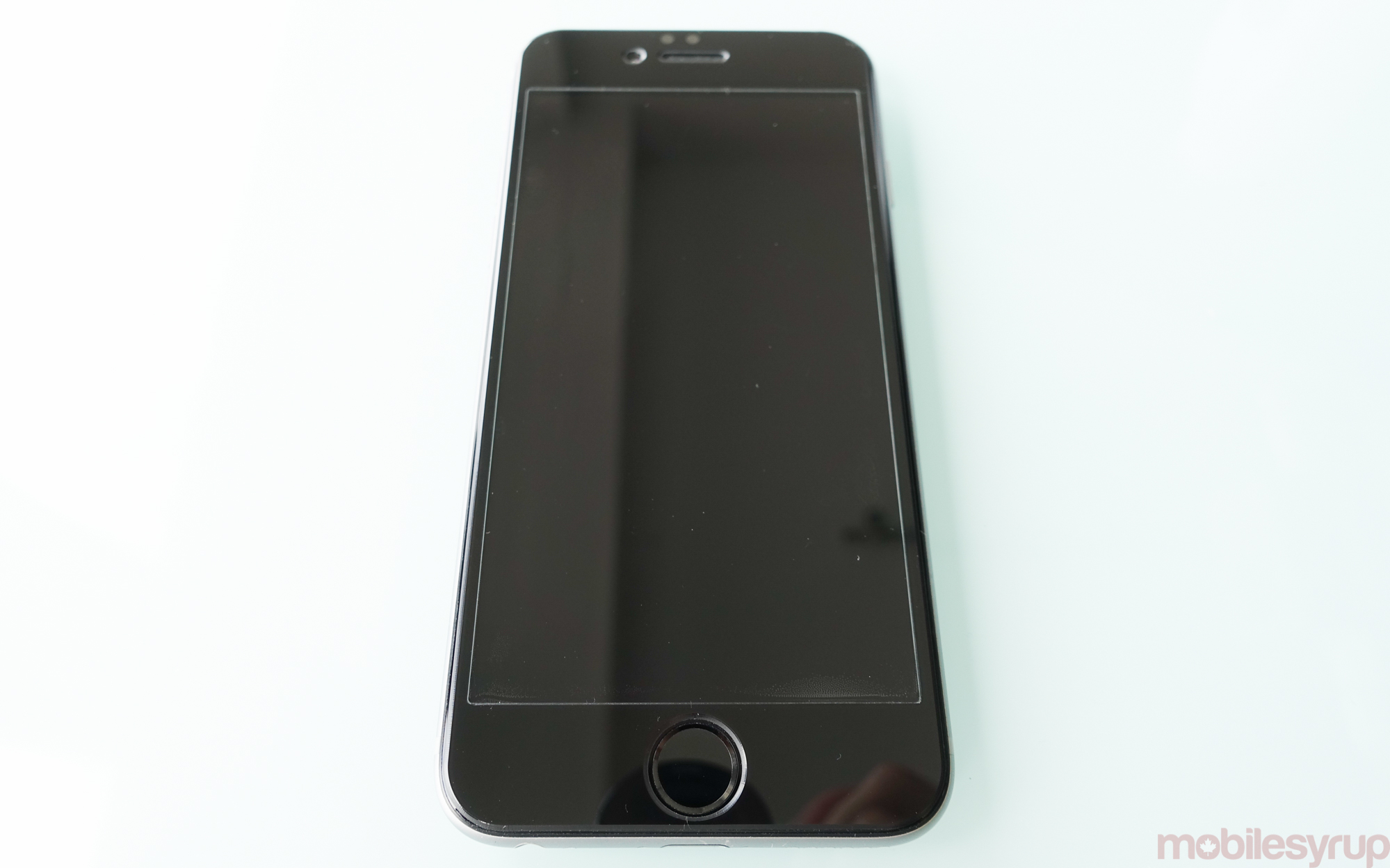 Using a phone with a tempered glass screen protector, which raises the touch point significantly, takes a bit of getting used to, but it’s well worth the trouble. Phantom Glass doesn’t cost much more than the average tempered glass protector — $34.99 CAD for the regular version, and $39.99 CAD for the edge-to-edge model — but it’s well worth the investment.