Twitter has reportedly been in talks to acquire Flipboard 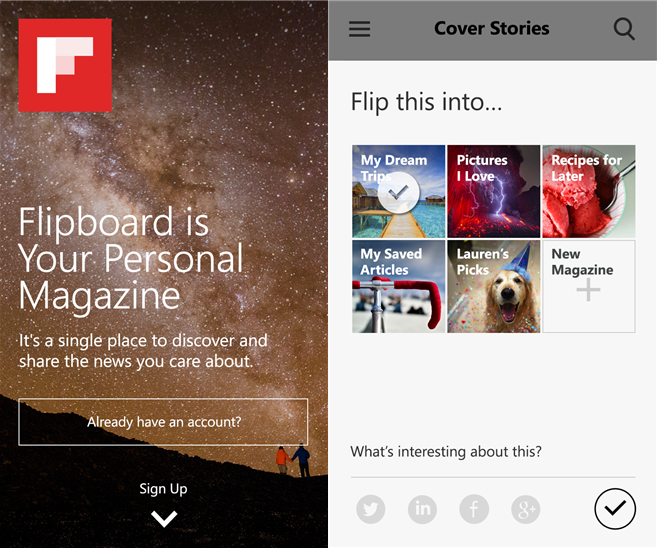 Twitter has been in talks to acquire social aggregation app Flipboard, according to a new report from Recode.

Talks have been taking place since the start of this year and have been led by the company’s CFO, Anthony Noto, says the publication. If a deal were to get done, it would be an all stock acquisition that would apparently value the company at around $1 billion. However, it appears that talks between the two companies have stalled recently.

As Recode notes, one of the main draws of Flipboard for Twitter is the company’s founder and CEO Mike McCue, as well as the talented team he’s built around himself.

McCue is one of Silicon Valley’s old guard and one of its most respected businessmen. He’s been building companies since the mid ’90s. In 1996, he sold his first company to Netscape for $20 million, later becoming the company’s vice president of technology.

He also has an interesting history with Twitter. In 2010, he joined the company’s board of directors only to leave it two years later. McCue’s departure came right around the time Twitter decided to lock down third-party developer access to its platform. In an interview with the Daily Graph, McCue told the publication, “Twitter was created as an open platform, an open communications ecosystem, and I hope it can stay that way. You have to be really careful not to let money get in the way of that.”

If only for that reason it would be interesting to see what McCue would bring to the company were he to become one of its employees. Indeed, Recode speculates that if McCue were to join Twitter, he would be the most likely candidate to succeed the company’s current CEO, Dick Costolo.