There are approximately 12,000 smartphones issued to Toronto municipal employees, and one city councillor wants the Uber app deleted from every one of them.

Jim Karygiannis, councillor for Ward 39 in Scarborough-Agincourt, has written and plans to submit a motion to the city council next month to “limit the liability of employee use of Uber.”

“City employees with work-issued smartphones may be using Uber to go to City meetings. If those employees are physically harmed in an accident, [they] will hold the City of Toronto taxpayers liable because they were on work time when they were injured,” the motion claims.

Karygiannis notes that UberX drivers, 13 of whom were recently charged in a blitz by Toronto Police, don’t have proper insurance to be ferrying passengers for money. Last year, the city filed an injunction attempting to ban Uber from Toronto, similar to orders passed in Calgary and Vancouver. Uber came under scrutiny before it began pairing passengers with unlicensed civilian drivers; unlike Hailo, which has subsequently packed up its North American operations, Uber is not a licensed taxi company in Toronto.

The company operates in a legal grey area in most Canadian cities largely because it insists on being seen as a tech company that merely links drivers, licensed or otherwise, with passengers. In cities where UberX operates, people have stopped taking licensed taxis altogether, noting that the alternative is cheaper and, in many cases, more comfortable.

Uber also argues that UberX drivers are properly insured in Toronto, despite not being recognized by the city. The injunction hearing is set for May. 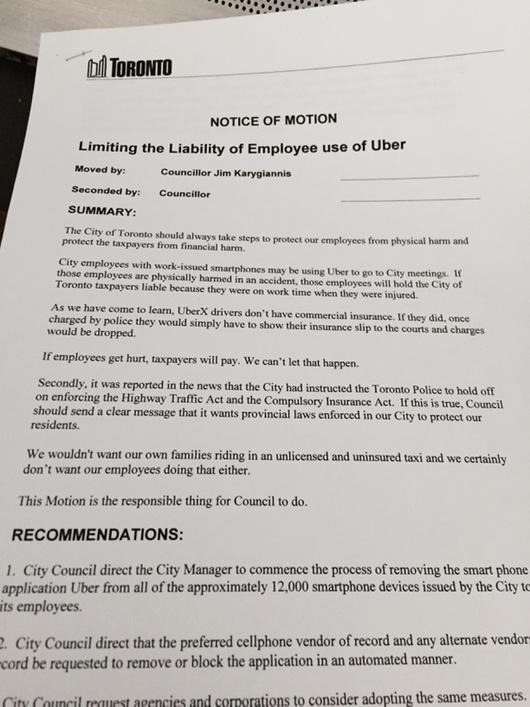