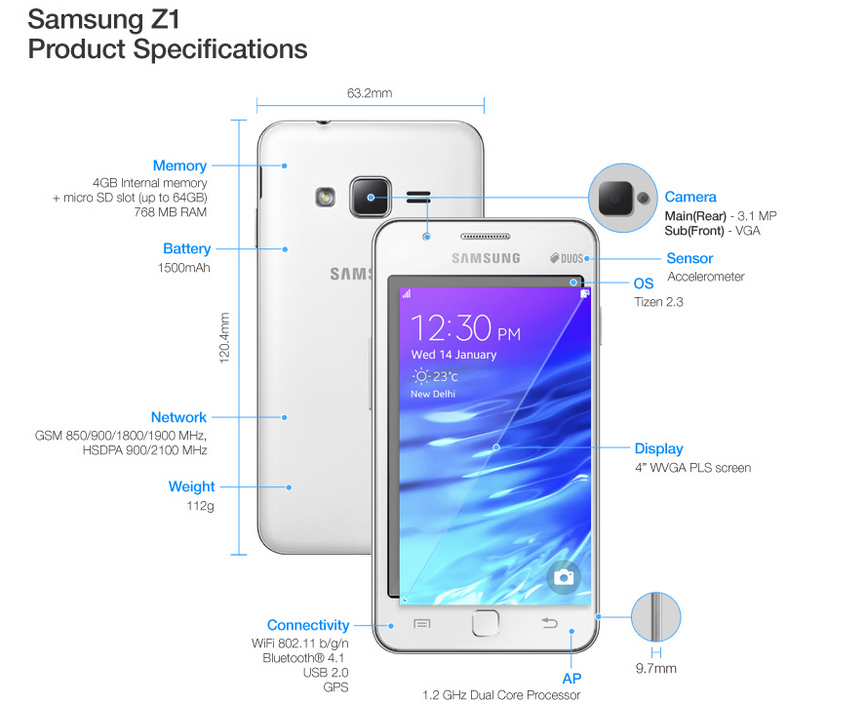 We’ve heard a lot about Tizen over the last couple of weeks thanks to Samsung’s commitment to running this mobile OS on its smart TVs, but today brings a different type of Tizen news.

It seems like an age since we first heard about the Samsung Z, the Tizen phone announced in June of 2014 that was supposed to hit Russia at some point last fall. About a month after the Z was announced, word got out that Samsung had postponed the launch of its first Tizen phone indefinitely. The company apparently wanted to take some time to further enhance the Tizen ecosystem.

Now, six months later, we’re finally seeing a Tizen smartphone hit the market and it appears Samsung’s strategy has completely chanced. The Samsung Z1 launches in India in three colours (black, red, and white) today, but is the polar opposite of the the phone we saw last summer.

The budget Z1 represents an about face compared to the “premium” and “unrivalled experience” Samsung was touting with the Z in June. Instead of a HD display, quad-core CPU, gigabytes of RAM and a fingerprint sensor, the Z1 rivals the likes of the entry-level Lumia 530.

The Z1 is available from today running Tizen 2.3, which Samsung is pitching as a power efficient, speedy OS that consumes less data than rival software. The company claims that thanks to Tizen, the Z1’s small 1500mAh battery is capable of offering seven hours of non-stop video or eight hours of talk time.

This doesn’t change the fact that Samsung faces an uphill battle with Tizen, one that is wholly different from its fight for smartphone marketshare as an OEM. To that end, the company is hoping that deals with India’s Reliance Communications & Aircel will help attract users to this new platform. As part of the phone’s launch, Samsung is offering 500MB of data on the aforementioned 3G networks for the first six months of service. Not bad for a hundred dollar phone.