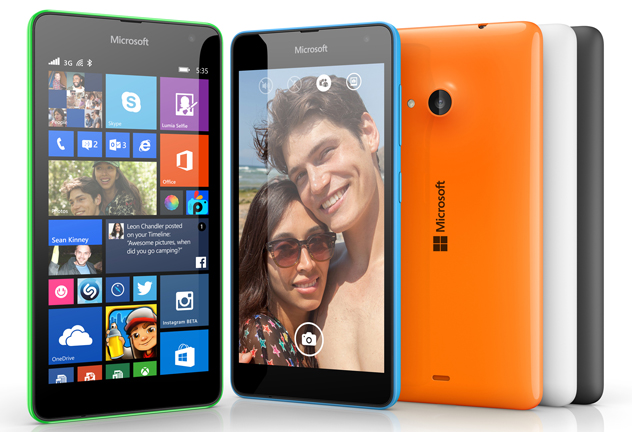 Microsoft has launched its first self-branded Lumia Windows Phone, and its representative of the company’s ecosystem as a whole. The device leaked in full earlier today.

The $130 USD Lumia 535 is the successor to the still-fresh Lumia 530, sporting a 5-inch 960×540 qHD display, a quad-core 1.2Ghz Snapdragon 200 processor, 1GB of RAM, 8GB internal storage (plus memory slot), a 1/4″ 5MP sensor on the rear and 5MP sensor with wide-angle lens on the front, 848x480px video recording, a 1905mAh battery, 3G connectivity (in single and dual-SIM varieties) and all the requisite connectivity like Bluetooth LE and WiFi.

Available in cyan, bright green, bright orange, white, dark grey, and black, the device comes with what Microsoft calls “our 5x5x5 smartphone package,” indicating a 5-inch screen, 5MP cameras and five built-in software experiences, including Skype, OneNote, Office Mobile, OneNote and Cortana. Whether these things are enough to entice the average customer to choose a Windows Phone over an equivalently-priced Moto E remains to be seen — the Motorola device has similar specs but less internal storage — but the Lumia 535 is clearly what the market can support at this time.

Considering the Lumia 635, which is available in Canada, has a slightly faster CPU but lower-resolution screen and smaller battery, the Lumia 535’s arrival may confuse potential customers. Both come with Windows Phone 8.1 and the Lumia Denim update, but the newer device is cheaper, bigger and more versatile, and has a front-facing camera.

There’s no indication of whether the Lumia 535 will be coming to Canada, but it will roll out to European markets sometime this month.