SwiftKey, one of many third-party keyboards made available on iOS 8 launch day, has netted an enviable one million downloads in its first 24 hours of availability.

The company posted a Tweet congratulating itself (and its growing user base) for the success, boasting that it shot to the top of the free apps chart on iTunes. 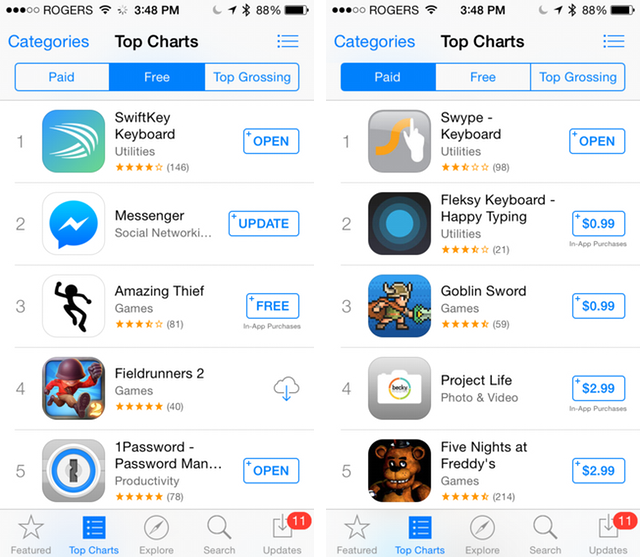 In fact, keyboards grace the top of both the free and paid app charts on iTunes. Swype and Fleksy, SwiftKey competitors that rose to fame on Android, also released successful apps yesterday.

But all the apps are experiencing growing pains. Users are complaining that they don’t understand what it means to grant the keyboards “Full Access,” with SwiftKey offering an explainer; and former Android users complaining that certain features are not available on the iOS versions are being met with terse explanations by their respective creators.

@fleksy From time to time the settings of my keyboard reset… And I'd like to remove languages I don't need.

Granting an app Full Access merely means that it can communicate with its container app in order to perform functions, like cloud syncing oft-typed words, that is prohibited by default. Apps like Fleksy and SwiftKey need users to turn on Full Access to properly function, but cannot force them to do so. It appears that education will become an essential part of iOS’s third-party keyboard ecosystem.

It also appears that non-alphanumeric keyboards like PopKey, which we described yesterday, are not being approved by Apple, though there’s no explicit explanation as to why.

Still, the iOS keyboard market, like that of the Android ecosystem before it, is poised to be a growth industry, and we’ve heard that lots of developers are planning to take on the big names in the months to come.