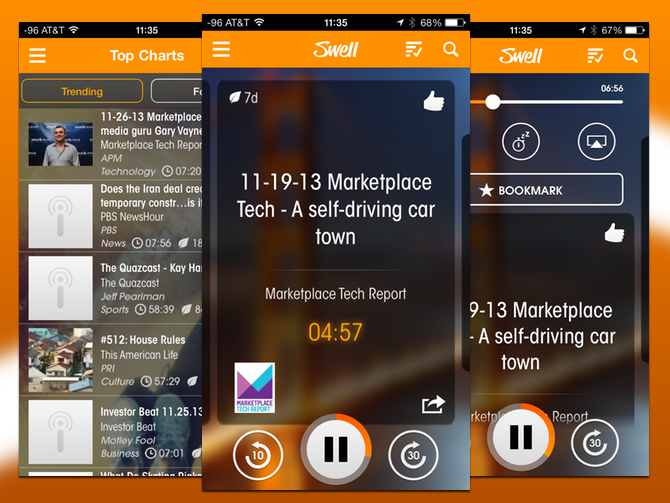 Apple has been on an acquisition streak lately. CEO Tim Cook announced during Apple’s Q2 results that 30 company acquisitions have been made over the the last nine months, including $3 billion spent for Beats Electronics. Cook also declared that they Apple is “on the prowl” for additional companies and it was recently revealed that book recommendation service BookLamp, dubbed the Pandora for books, was folded into the Apple ecosystem.

The newest report to surface is that Apple will be honing in on the broadcasting space and acquiring personalized talk-radio app Swell for $30 million. According to Re/code, Swell, which is backed by investors such as DFJ, Google Ventures and InterWest Partners, will completely shut down later this week.

Swell allows you to stream talk shows/podcasts on the go, then learns your listening habits and curates content based on your preferences. Some of the bigger media partners include, ESPN, NPR, FOX, ABC, BBC and TED, and podcasters can also import their podcast to iTunes. Swell currently has an iOS app, but is (was) also beta testing an Android app.

Update: Looks like the rumours of Swell being acquired is true as its website and app has been updated with the following message:

“Thank you for using Swell over the past year. We wanted to let you know that the Swell service is no longer available. We’ve been inspired by the opportunity to create quality products that positively impact users’ lives, and we are grateful to all our listeners. Thank you everyone for your support”