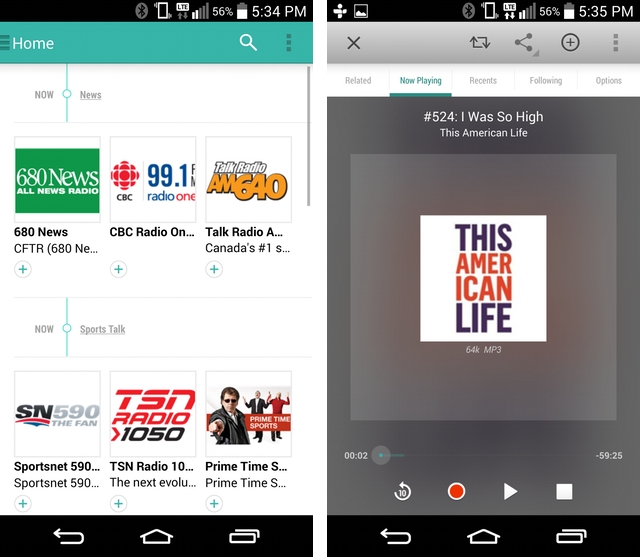 TuneIn has long been a stable of many Android and iOS users’ music, talk and podcast listening.

Today, the company announced a revamp to its brand with new apps and a re-emphasis on social elements. TuneIn Radio, as the app itself is called, sports a beautiful new interface on iOS and Android, the former with a bottom tab bar and the latter a left-side hamburger menu.

The goal of TuneIn Radio has always been to be able to listen to live terrestrial radio stations, online-only streams and podcasts. The new app expands on that functionality to allow users to “follow”, or subscribe to, favourite networks. The addition of a social element, which is called TuneIn Echo, allows users to share these streams in a feed with friends and followers.

Of course, users aren’t sharing their own content, but the addition of a feed makes it easy to discover great content from within one’s social circle — provided those friends are all using TuneIn and not some other podcast manager. It’s unclear how useful this feature will prove to be; TuneIn launched Live in 2012, a way for users to see in real time what others were listening to, and Echo appears to be a hyperlocal version of that same idea.

Mainly, the update takes what made TuneIn great — discovery of excellent local and online content — and improves the performance and usability of the app.

What’s interesting about TuneIn is that, though podcasts are not a main focus of the app, like rival Stitcher, it can be used primarily as a podcast client. There are number of excellent podcast managers for iOS and Android, but the ad-supported version of TuneIn is free, and quite capable. There’s a $3.99 ad-free version, too, if desired.

Do you use TuneIn Radio? What do you think of the improvements? Personally, I think it looks great, but it doesn’t compete with top-flight podcast managers like Pocket Casts or Doggcatcher. For casual online radio listening, though, nothing touches it.