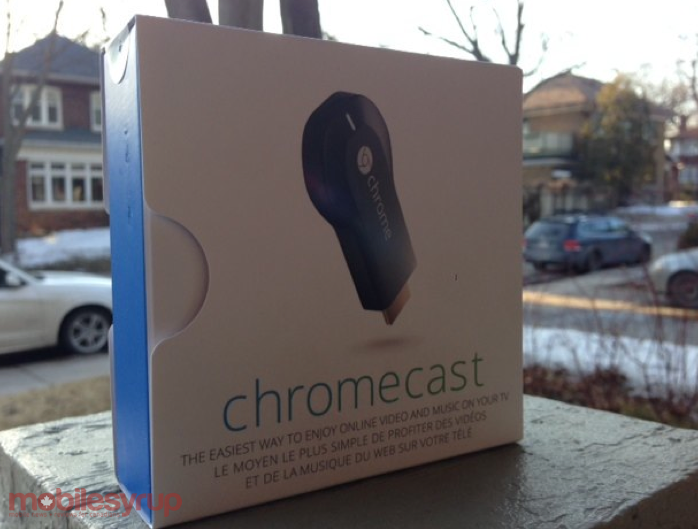 Google has launched its Chromecast HDMI dongle in Canada, along with 10 other regions around the world, for $39 via the Play Store and Amazon Canada.

Even if you’ve yet to see a Chromecast in action, it’s likely crossed your path as an Apple TV competitor. The spiritual successor to the Nexus Q, Chromecast allows users to stream music, video and photos from an Android or iOS device, as well as from Windows or OS X with a Chrome extension.

Google recently opened up the Chromecast SDK to all third-party developers, expanding its initial reach beyond a small subset of partners like Vevo, Netflix, Songza and Plex. For instance, popular Android podcast client, Pocket Casts, added Cast support, and many other media companies are integrating Chromecast into their iOS and Android apps. Rdio also recently hinted at adding support for the dongle but quickly retracted the statement.

Casting ability is dependent on region, of course, so Netflix will only be able to stream content to a TV that is already available in Canada. Unlike Apple TV, Chromecast does not mirror local content but creates separate streams from the web. This frees up your phone or tablet to do other things, offloading the processing power to the HDMI dongle itself. On the flip side, apps like AllCast allow for mirroring of local video, audio and photo content to a television.

Chromecast is easy to set up — just plug it into a free HDMI port on your TV or receiver and power it using an included AC adapter or microUSB to USB cord — and extremely intuitive to use. An iOS, Android, Windows or OS X app helps establish a connection to a home WiFi signal, and once setup is completed, compatible apps will automatically find the accessory and add a streaming option.

Every app I’ve used, from mirroring a Chrome browser window to streaming music in Songza, has been reliable and quick; all the early adopter bugs appear to have been fixed.

While perhaps not as flexible as Apple TV — it’s not possible to mirror one’s Android or iPhone to a TV like Airplay Mirroring — Chromecast provides a lot of value for its price, and is well worth the investment.