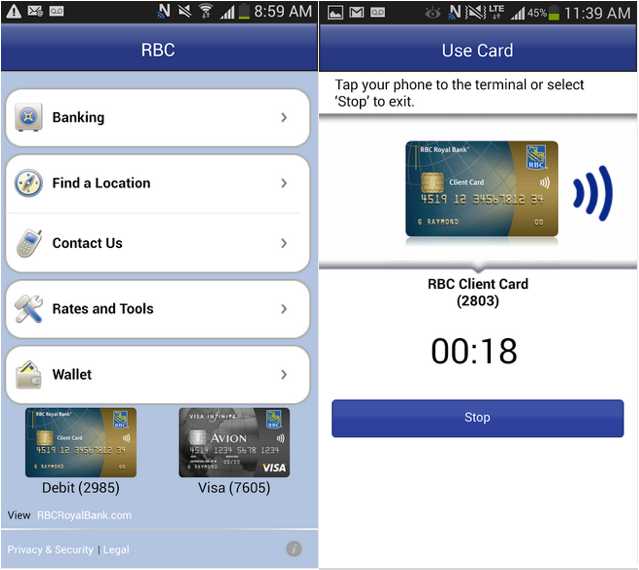 Bell and RBC have been testing their mobile payment service since last May and it’s now live. The RBC Wallet, “powered by RBC Secure Cloud” is a “mobile commerce service” that allows Bell and RBC customers (debit or credit) to make small-ticket payments from a mobile device.

There are some current limitations, as it is only available to those who have the Samsung Galaxy S3 or Samsung Galaxy S4 running Jelly Bean “with the correct NFC-enabled SIM card.” There is no need to download another app as it simply is an add-on to the current RBC Mobile Android app. You can pay for items at any locations that have Visa payWave or Interac Flash (payments are limited to $100). Another interesting take on this partnership with Bell and RBC is that every time you make a payment you’ll receive points from those retailers enlisted in the RBC Rewards points program. In addition, the option of signing up personalized offers with RBC Secure Cloud is available, which appears to be similar Apple’s Passbook and Rogers suretap Wallet as it stores all your loyalty cards in one location.

What’s impressive is that RBC notes, “Imagine leaving your wallet at home, on purpose. RBC Secure Cloud provides many payment options, but sometimes you just want cash. That can be easier than ever, too. You can take money out of an ATM with your smartphone. No bank card required.” No idea yet how that one works, but it will be interesting to test that out.

From the original press release, Bell and RBC stated this will be coming to devices including the BlackBerry Z10, BlackBerry Q10, Bold 9900, Bold 9790, Curve 9360, “and a range of Android devices from manufacturers such as Samsung, Sony, HTC, LG.”

Update: We reached out to RBC to understand how taking money out of an ATM works with your smartphone, but they stated to us that “the video you saw is our long-term vision and we will continue to develop new capabilities – ATMs are part of that long-term plan.” So, unfortunately this feature for now is not available and we’ll still have to use the old bank card route.