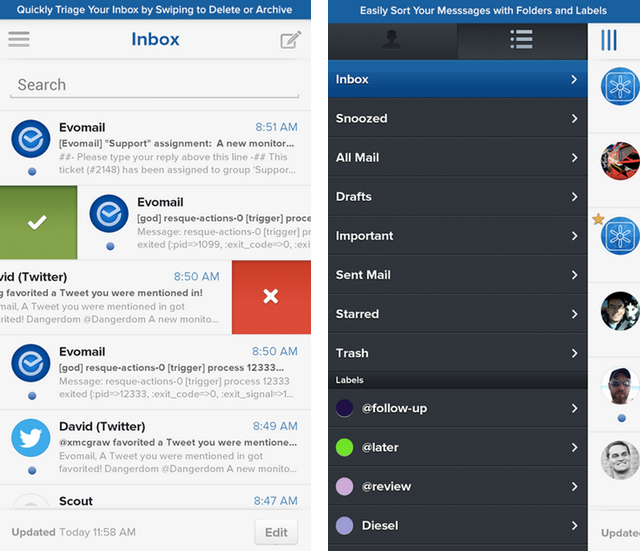 If you’re a Gmail user on Android, the official app offers you a pretty great experience.

But ask an IMAP user whether the built-in client meets their needs and they’ll likely scowl and swear at you. Evomail for Android attempts to bridge the gap in experiences, adding a viable third-party alternative to Gmail users while bringing great IMAP functionality, along with Yahoo, iCloud, AOL, GMX, Fastmail and Yandex.

Evomail began its life as an iPhone app, allowing users to perform various functions with gestures. For example, swiping right from the left side of the app brings up a menu that includes a Snooze function: Evomail can store conversations for future action, like a task manager.

The app does not take a traditional Android design approach, but that’s no criticism. Evomail is attractive and smooth, with a high frame rate and smooth animations. The left sliding menu shows all your Gmail labels and folders, though it does not integrate with the new sub-categories from the first-party Gmail app.

Push notifications and multiple accounts are supported, and the company is promising Exchange and POP3 support in the coming weeks. One missing feature that was brought to the iPhone version recently is aliasing — the ability to “send as” another address. Until then, it’s not going to replace Gmail for me, but it should suffice for most users with a simple SMTP workflow.

I’ve been testing the beta version for a few weeks, and it’s clear the Evomail team wants to improve this app as quickly as possible. What is rough around the edges today will likely be filed down next week, so stay tuned.