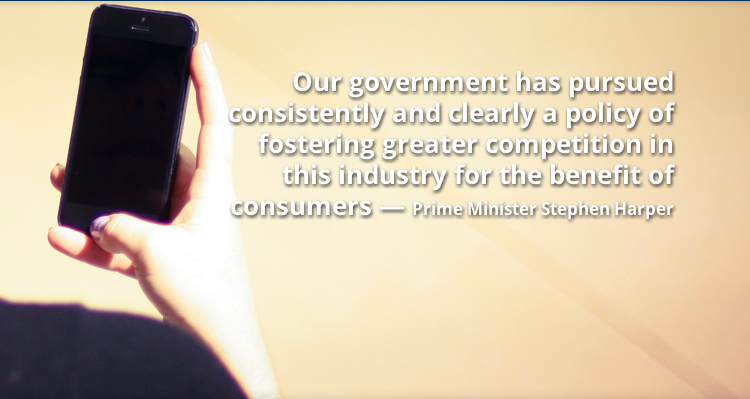 “There is no loophole.”

The Conservative government has hastily erected a comeback of sorts to the incumbents’ Fair For Canada campaign, a one-pager called Consumers First.

Within this facts mission, newly-appointed Industry Minister James Moore attempts to clarify all of the misconceptions surrounding a foreign telco entering Canada. Specifically, he upholds the notion that by inviting more competition into Canada, the government is appeasing its electorate and performing a valued service: to lower the costs of Canadians’ wireless bills.

To that end, the site points out that since the Conservative government adopted “pro-competition, pro-consumer” wireless policies in 2008, when they set aside spectrum for new entrants, the price of the average wireless bill has dropped 20%.

Of course, this does not distinguish between the price of service from a new entrant like Wind or Mobilicity, whose average ARPU is under $30 per month, and an incumbent like Rogers, whose blended ARPU hovers around $60, but, on average, Canadians pay slightly less than they did five years ago.

At the same time, the site points out that although this government has taken steps to ensure Canadians pay less, we still pay among the highest bills per month of all developed countries, only slightly under the US market (in which Verizon is the biggest provider). We also pay some of the highest roaming bills in the world.

The 700Mhz spectrum, which limits the incumbents to one block each per region, will take place next January, and though Verizon has deferred its decision to purchase Wind and/or Mobilicity, it has not yet bowed out of the race entirely. Thanks to its designation as a “new entrant,” according to the government’s spectrum policy, it is entitled to purchase two blocks of spectrum in each designated region. The incumbents think that isn’t fair; the Canadian government thinks the incumbents, who hold 90% of the wireless market and 85% of the country’s engaged spectrum, have enough.