doubleTwist for Android redesigned with hints of Holo 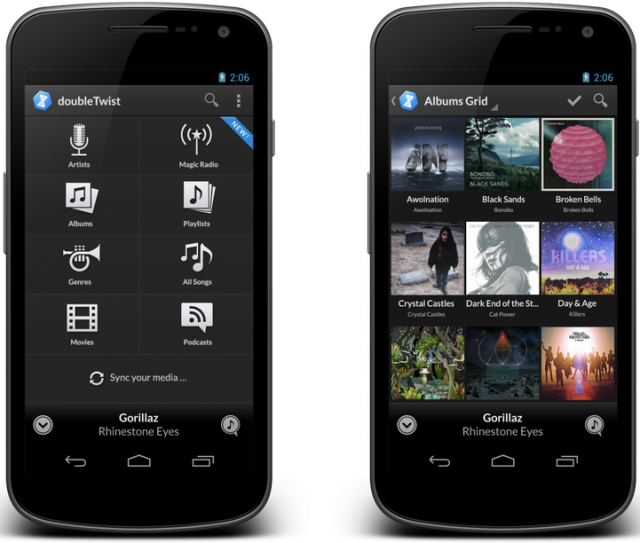 As expected, doubleTwist for Android — one of the premiere and longest-running music players on the platform — has been updated to more closely conform with Google’s Holo guidelines.

Like many recent apps, doubleTwist’s designers have taken a cue from Google’s suggestions, as well as industry standards, and delivered an experience with a top-level Action Bar, a virtual menu button, and a more consistent look and feel.

A choice quote from the company’s blog post on the app update as it relates to the wider Android ecosystem over time:

Not only was Android rather garish looking, it was also changing its UI guidelines and styles very often. When we first launched, it had just made several complete U-turns on design guidelines: for instance, where Google at first advised icons to be designed in a slanted, 3D perspective, icons were now to be flat, without any kind of perspective, using minimal decoration. This trend of sudden drastic changes in design styles continued as Android grew older: the system font for Android changed, green and orange highlight colors were phased out, and with Android version 3.0 a new design style called ‘Holo’ was introduced. I was very interested in Holo: I felt like the design team at Google was on to something with its simple lines and flat surfaces.

Curiously, doubleTwist has managed to retain its legacy distinctiveness and incorporate much of what makes current Android design so exciting. The company realized that Holo was not just a passing phase, and that while Google is refining it slightly (see the “hamburger” icon and sliding menu bar in its recent first party apps) it’s not going anywhere anytime soon.

doubleTwist has adapted its app for portrait and landscape mode, both for phones and tablets, and its performance has improved considerably over the previous version. And they say that this is just “phase one” of doubleTwist’s overhaul, with further optimizations for larger-screened devices and tablets.