Fongo is a well-known VoIP provider in Canada, and was once attached to Dell’s efforts to break into the space that Skype and Viber dominate.

The company, which made news last month by offering to purchase Wind Mobile, is going even further into the white-label app game by allowing users to design and use a customized version of the Fongo app for iOS and Android through a service called Faces.

At its core, Fongo can replace your traditional cellphone provider, as it allows number porting for a small fee. It can also register a brand new number for you, with a local area code, and lets you call numbers in many major cities for free. It supports voicemail, call display and unlimited texting, though there’s a $2/month fee to message non-Fongo numbers. Call credits for numbers that don’t fall into Fongo’s coverage area are cheaper than the equivalent per-minute costs from Skype or Viber.

Fongo Faces are easy to set up and connect to your account, and as you can see below, we set up a very rough MobileSyrup-branded version in minutes through the company’s web portal. This could be a big deal for marketers and brands who use the app widely — it has been downloaded over a quarter million times by Canadians — but we don’t really see the appeal for individual users. 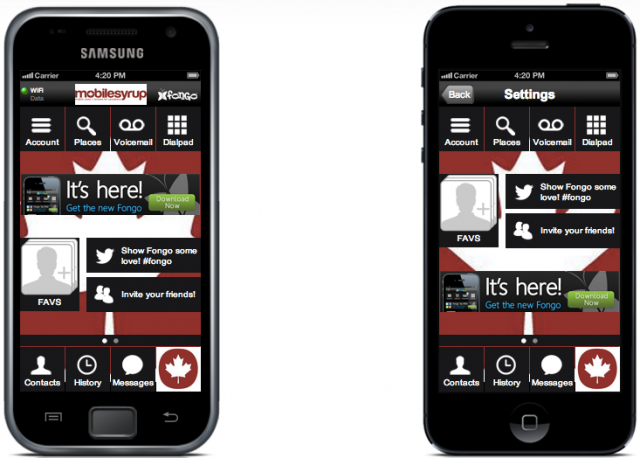 The major problem with Fongo is that it’s just not a well-designed app. The interface feels clunky and unintuitive, and hasn’t aged well in the age of Holo and lean app design. This alone has kept me from using Fongo over the competition, even if its feature set is more expansive than Skype.

With a growing user base and a redesign, Fongo Faces could take off. As it stands, it feels a bit limited.