Rogers rebrands parts of its network to LTE Max with emphasis on 2600Mhz spectrum, launches in over 20 new markets 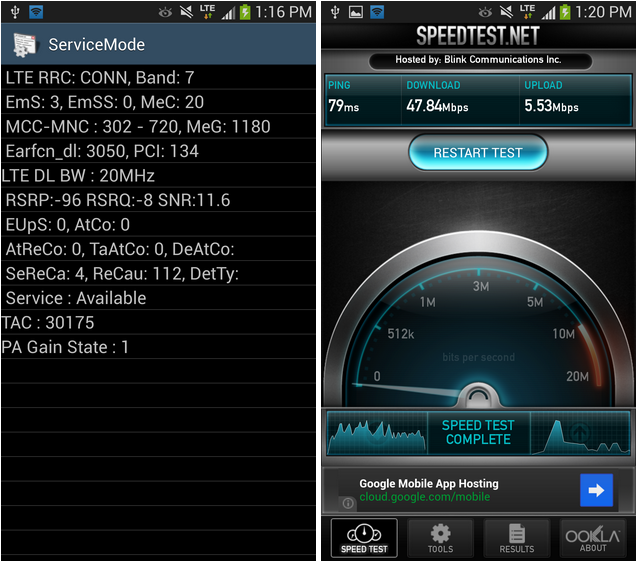 Rogers is rebranding parts of its high-speed network to LTE Max today, which refers to the availability of LTE across two high-frequency bands, AWS (1700/2100Mhz) and 2600Mhz.

Though less of a product launch than a repositioning of its existing assets, the new branding effectively conveys the company’s spectrum advantage over Bell and TELUS. Rogers has launched a three devices in recent months with support for its growing 2600Mhz network, the LG Optimus G, Samsung Galaxy S4 and, today, the BlackBerry Q10. The Galaxy S4 is particularly interesting because, unlike the other two handsets, it supports both AWS and 2600Mhz over LTE, and can switch dynamically between the two based on prevailing network conditions.

An official statement from Rogers confirmed that LTE Max refers to markets that support both frequencies where 40Mhz (2x20Mhz) is available. According to a recent Redboard post, this includes 34 of the company’s 44 LTE markets. Bell also shares a great deal of 2600Mhz spectrum with Rogers, as the companies obtained it as part of a joint Inukshuk Wireless partnership in 2005. Bell has limited its rollout of 2600Mhz spectrum to only a few areas around Canada, and has limited its marketing strategy to just AWS-based LTE.

LTE Max refers to our national network deployment of dual frequency 2600 and 2100 MHz bands, deployment of 2x20MHz spectrum blocks and high concentration of cell sites within LTE coverage area – it isn’t using carrier aggregation. The maximum download speeds for LTE Max are 150 Mbps, but speeds may vary based on device, topography and environmental conditions, network congestion and other factors.

Most LTE-capable devices today are limited to 100Mbps in the downlink based on the UE Cat 3 LTE standard. Qualcomm’s integrated MDM9x15 baseband, which is found inside most modern devices, supports Category 3 LTE; newer devices released later this year will use the company’s newer MDM9x25 baseband with support for UE Cat 4 LTE and theoretical maximum downlink speeds of 150Mbps.

So at the moment Rogers is preempting the industry, attempting to stay ahead of the products themselves. The ability for handsets and mobile internet devices to dynamically switch between Band 4 and 7 depending on network conditions will help stave off congestion and ensure users maintain LTE signals in more places. Until the wide adoption of 700Mhz in Canada, this is likely the best scenario we’re going to get.

Even with the expansion of its LTE network, typical speeds will continue to fall within the 12-25Mbps range, but we’ve seen spikes nearer to 50Mbps on 20Mhz cells such as the one in the above Speedtest photo.

Rogers recently announced an expansion to 44 new markets, more than 20 of which are part of its LTE Max network and available today, mainly in southern Ontario.