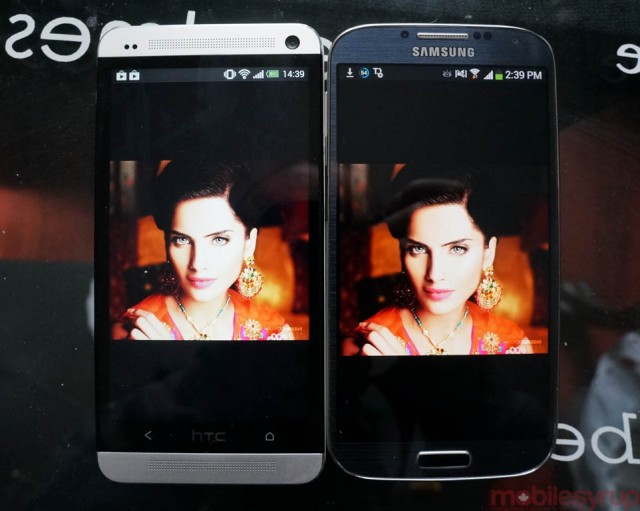 There’s a new standard in town and devices like the HTC One and Samsung Galaxy S4 are leading the way. Full HD screens are to smartphones in 2013 what 720p displays were a year earlier, and while the shift isn’t as dramatic as it was coming from WVGA to HD, the current crop of choices is an embarrassment of riches.

The Galaxy S4 and HTC One are two of the most anticipated devices on the market today, and though they’re as different as can be, they both boast screens with resolutions of 1920×1080 pixels. The former employs a 5-inch Super AMOLED display, which pushes deep blacks and heavy saturation over colour accuracy, while the HTC One’s 4.7-inch screen is slightly sharper and more colour-neutral.

We’re going to compare the phones’ displays with as equal lighting conditions as possible. There must be a disclaimer, though: I don’t currently have a light meter, so while both displays are set to max brightness, it appears that the HTC One is slightly overblown in these photos due to a higher maximum brightness setting. That being said, you can still derive the various traits of each display and their respective technologies. The Galaxy S4 was also set to “Adapt Display” mode which uses ambient light to trigger one of three. 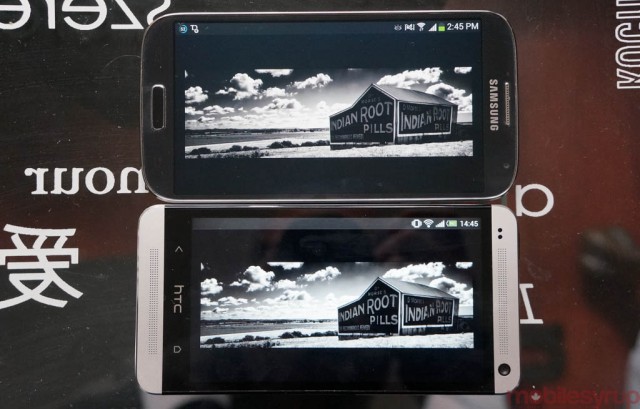 We’ll start with the greyscale test. You can see above that the HTC One has pretty fantastic black levels for an LCD screen, and whites appear a little more accurate than on the Galaxy S4, on which they appear slightly blue. 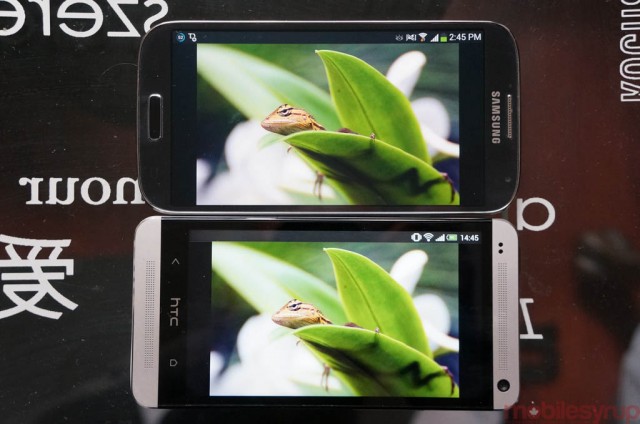 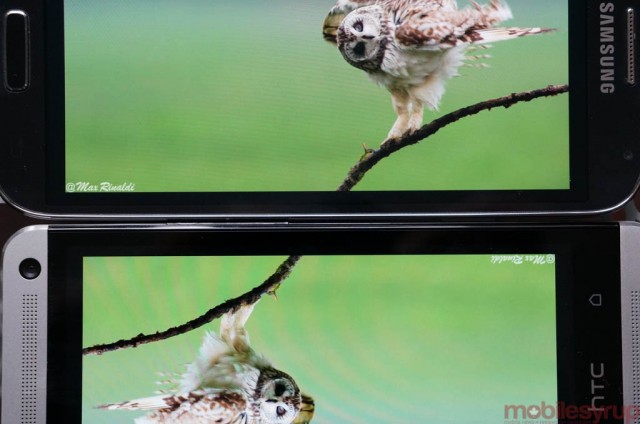 Colours appear more heavily saturated on the Galaxy S4 and, combined with the larger screen, are more pleasant to look at. Though the One’s image contains more detail, it’s a toss-up as to which one produces the better image. The HTC One’s LCD display produces more even, natural colour, and text looks better on its 4.7-inch screen. 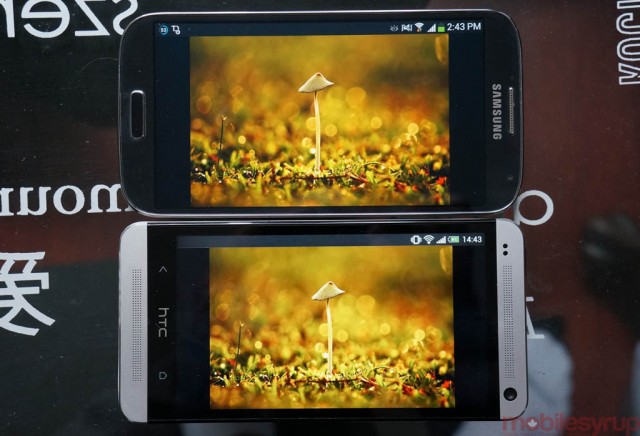 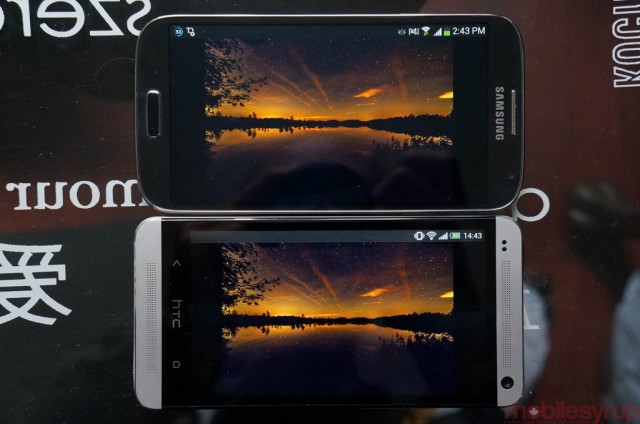 Both devices hold up pretty well when it comes to subtle shades and gentle transitions between gradients. Their pixel densities are so sharp that photos look equally stunning, but I’d give the edge to the Galaxy S4 here, as its improved contrast produces more fluid photos. 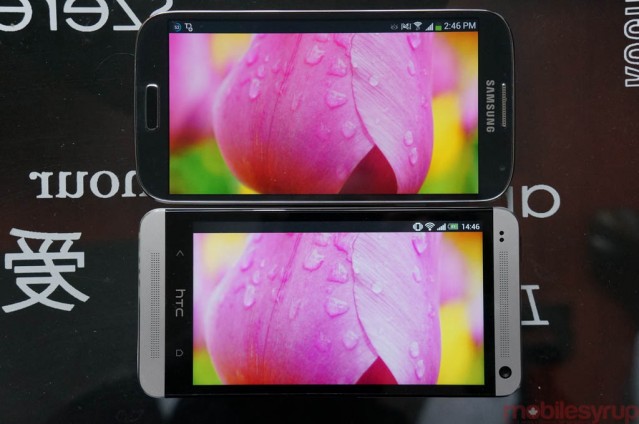 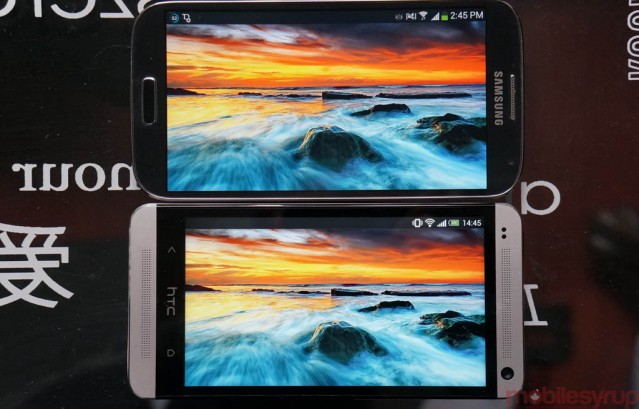 The HTC One again displays everything with a less saturated, cleaner palette that emphasizes detail over contrast. The water droplets on the rose, for instance, look more realistic and inviting on the One, though the Galaxy S4 maintains better dynamic range between the fore- and background objects.

The fiery night sky in the bottom photo appears softer on the One but you can make out more light shading detail on the rocks than you can on the GS4. 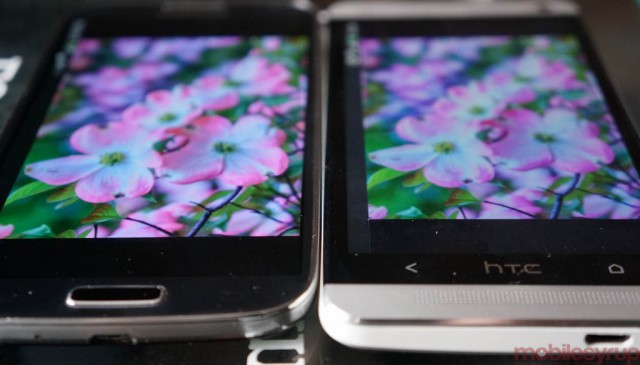 Both devices have excellent vertical and horizontal viewing angles, though the Galaxy S4 seems to take the prize with this particular test. Neither phone shows any discolouration or ghosting when viewed at even the steepest of angles, making either one a good choice. The Galaxy S4 has a larger display and therefore more usable space, especially when using apps that make of the One’s virtual menu button. 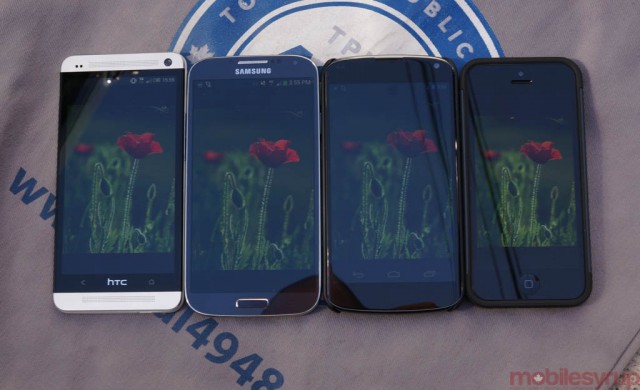 In our sunlight tests, the One is slightly more visible at maximum brightness than the Galaxy S4, though the iPhone 5 shows the most detail of all the phones. Maximum brightness is higher on the HTC One, and the LCD display is better suited for work outside, but no phone, iPhone 5 included, is completely usable in direct sunlight. 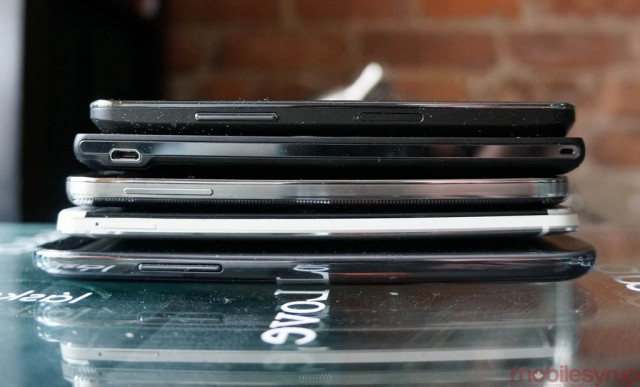 So there you have it: the Galaxy S4 looks to have an overall better screen for most use cases, though I still prefer the sharpness and colour accuracy of the HTC One. Given the choice, I’d take the latter phone, but the Galaxy S4 is a fantastic choice for users who want a larger high-resolution phone.