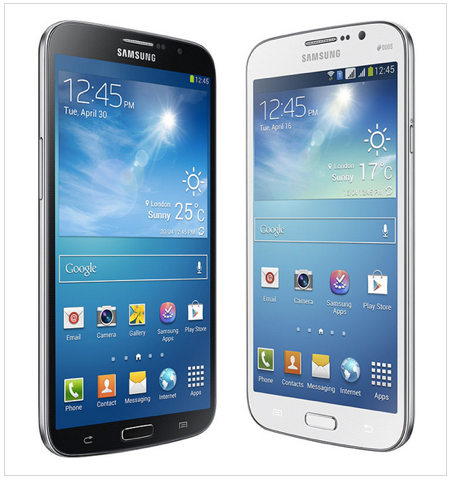 The rumours at first seemed incongruous with Samsung’s apparently two-pronged approach, the Galaxy S and Galaxy Note, but today the company has taken the wraps off a new series, Galaxy Mega.

The Galaxy Mega 5.8 and 6.3 will each iterate on the company’s largest smartphone offerings, broaching the true line between smartphone and tablet. It’s also apparent, especially in the 5.8-inch version, that these will be low- to mid-range devices, focusing on users who don’t want to invest in two devices.

Its 6.3-inch (seen above in black) counterpart is equipped with a 720p display, making for a Nexus 7-like 233ppi pixel density, a 1.7Ghz dual-core processor, 1.5GB RAM, a 3200mAh battery, and the same 8/1.9MP camera combo. Unlike the 5.8-inch version, the larger Mega comes with LTE support. Both devices will have a removable battery and microSD slot for expandable storage.

The phones will both come with Android 4.2.2 and many of the same features found in the Galaxy S4, including Group Play, Air View, S Travel, Story Album, Multi Window and more. Unlike the Note series, neither device comes equipped with a Wacom digitizer, which will also bring the cost down.

The larger variant looks very much like an enlarged Galaxy S4, and competes directly with Huawei’s 6.1-inch Ascend Mate which we saw at CES and considered enormous. Both Mega smartphones will have very thin bezels, ensuring the most compact “phablet” experiences to date, but they are still far larger than the average bloated Android smartphone. Indeed, there’s a good chance they will never see the North American market, focusing instead on the developing Asian and European taste for larger, low-cost smartphones

Whether the world needs phones this size is one thing, but Samsung seems adept at convincing people there are use cases for all manner of handsets. No word on whether these are coming to Canada, but we’ll keep you posted.