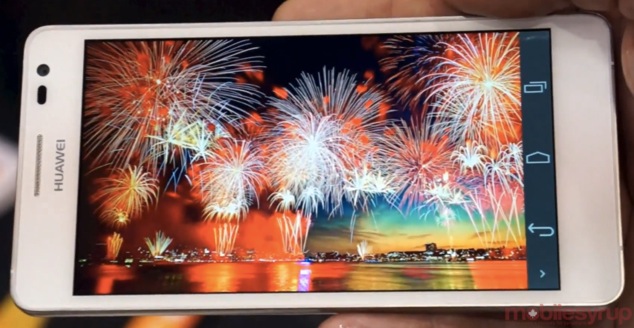 We were eager to check out Huawei’s newest flagship device, the Ascend D2, after the company announced the 5-inch monster at a press conference on Monday. We had a chance to play with the phone and came away quite impressed with its vivid IPS display, its excellent metal build quality, quick camera shutter and thoughtful UI touches. Mainly, however, we were taken with the speed at which Huawei seems to be innovating in the Android space, and how quickly it has gone from a simple white-label OEM to a brand users know and want to learn more about.

There is no word on whether the device is coming to Canada, since it lacks LTE compatibility in this version and only support UMTS 850/900/2100 MHz for Asian markets. I wouldn’t be surprised to see the phone eventually come to WIND or Mobilicity to take on Samsung’s top-range products at an affordable price point, but Huawei wouldn’t hint as to whether that will happen.

We were also a bit disappointed to see no CPU upgrade over the previous Ascend D1 Quad XL, though the same quad-core K3V2 chip has seen a slight speed bump to 1.5Ghz. The 2GB of RAM and 32GB of internal storage also work in its favour, but we’re worried the 3000mAh cell would be better served by a 28nm chip; the K3V2 is a 40nm Cortex-A9, very similar to the Tegra 3. 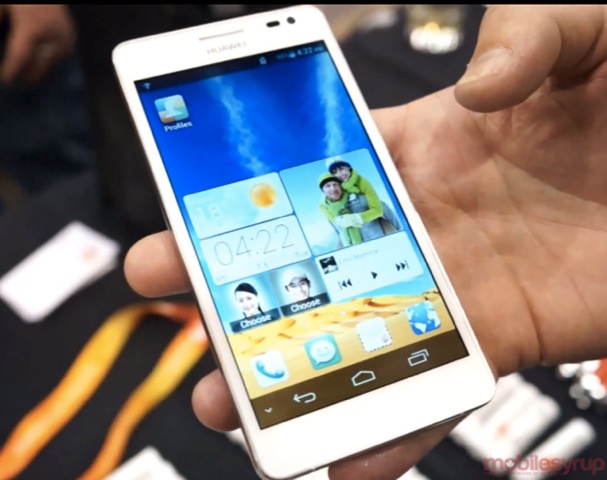 We were really impressed by the build quality and heft of the D2. It feels more substantial than any device the company has previously made, and the aluminum frame will help protect the phone against damage was falls and scrapes. The device is also water resistant, something that cannot be said for the majority of Android smartphones on the market today.

More than anything, though, it looks like Huawei really cares about the Ascend D2, and has fashioned a thoughtful, austere device that can and will compete against others hundreds of dollars more expensive. 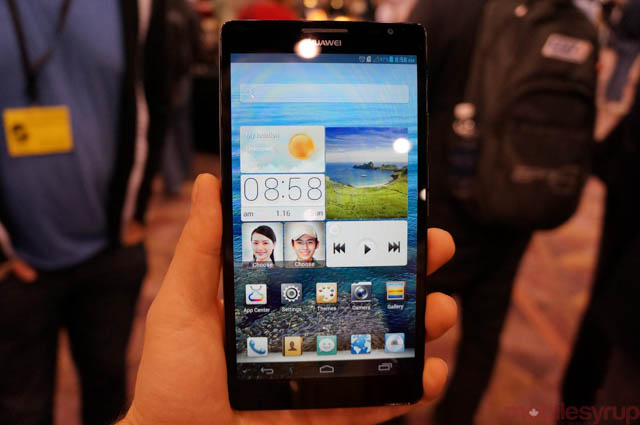 Next up is the Ascend Mate, a giant 6.1-inch device that intends to take on the Galaxy Note in some ways, but lacks the specs, the build quality or the vision to do so. Not to say the Mate is a bad device, but its specs are a little disappointing after playing with the sublime Ascend D2.

The phone comes with a 6.1-inch 1280×720 display, for a mediocre 240ppi pixel density. The screen, while well saturated, has disappointing viewing angles and mediocre maximum brightness. It shares the same quad-core processor and 2GB of RAM as the Ascend D2, but its 8MP camera produced muddy indoor shots.

Both devices incorporate some thoughtful UI changes to Android 4.1 Jelly Bean, such as a bottom navigation bar that can be hidden with a swipe. The company has incorporated some interesting technology into the Ascend Mate, including an excellent one-handed “tablet” keyboard and screen tech that responds while wearing gloves. Smart Reading, a feature exclusive to the Mate, allows you to define, search for keywords and access Wikipedia inside an app. There are also pop-up apps that allow you to use utilities such as a calculator, notes, messages and videos from within an app. 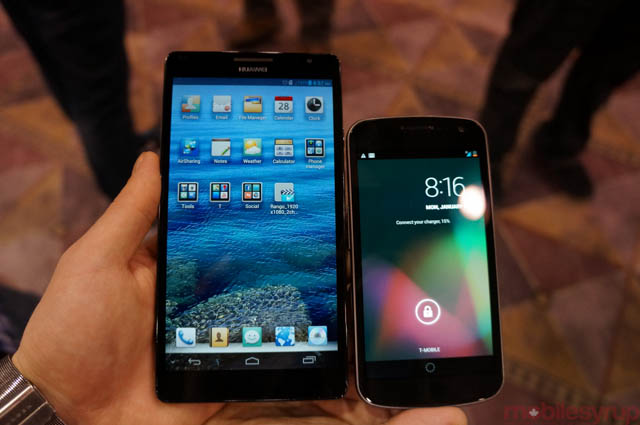 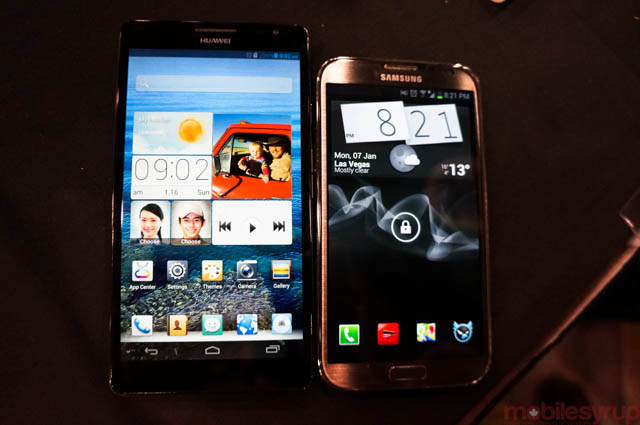 Despite being 6.1-inches, you can still make calls on the Ascend D1, though you will look ridiculous doing so. As you can see from the examples above, it towers over the Nexus 4 and almost dwarfs the Galaxy Note II.

We’ll bring you all the details of any upcoming releases of these devices when we have them. 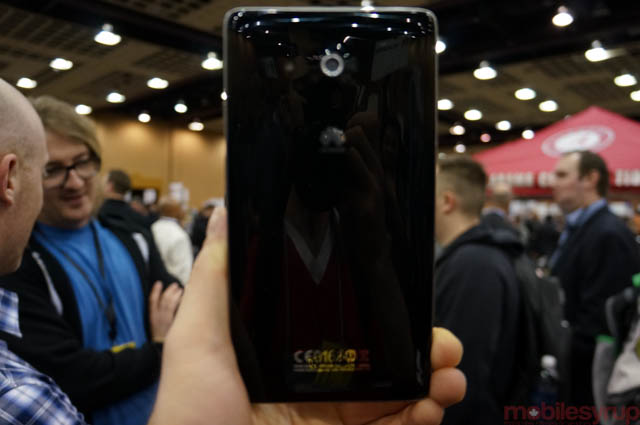 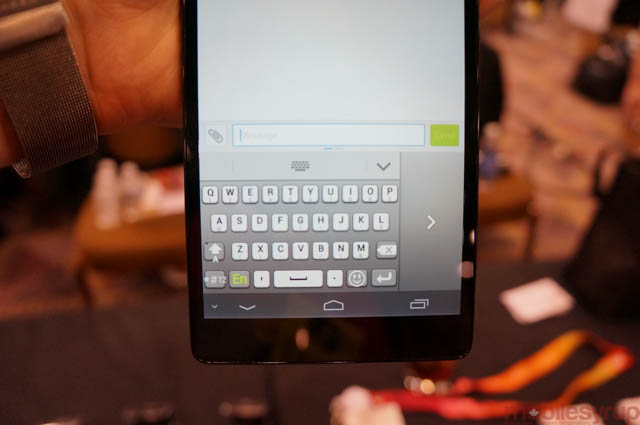 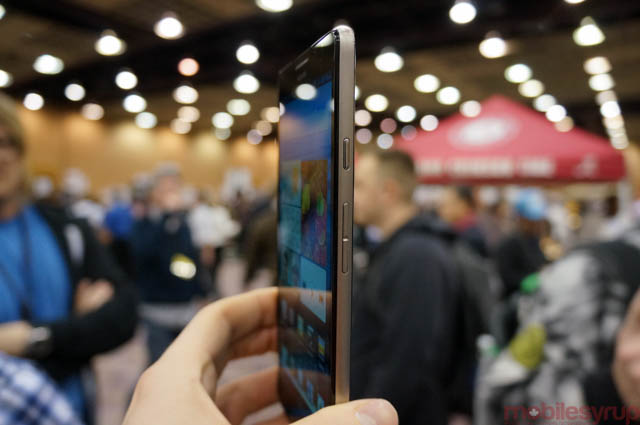 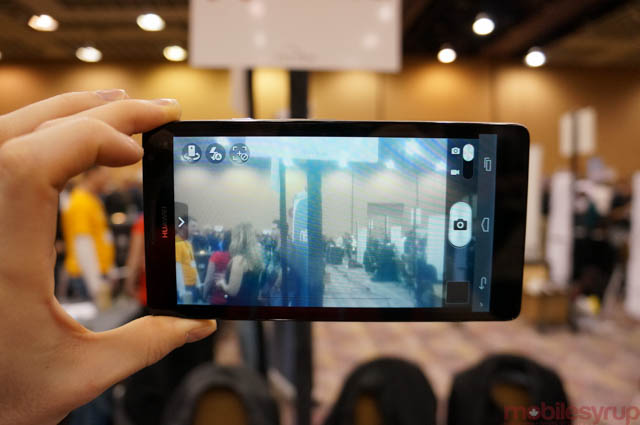