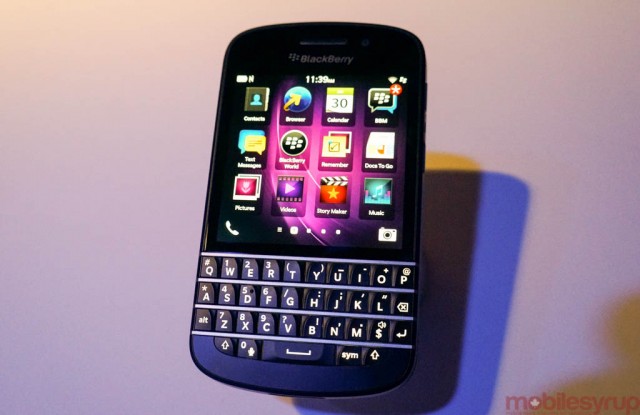 BlackBerry Z10 took all the limelight today, but the Q10 QWERTY device is also turning some heads. Both devices run their new BlackBerry 10 OS and will soon land on Canadians soil. The Z10 hits stores on February 5th at various price points. As for the Q10, this new ‘iconic’ QWERTY launch date is a mystery. BlackBerry only stated to us that it’ll be available sometime “this Spring.” Rumours circling on the web have the Q10 coming mid-March, which aligns to previous comments by Throrsten Heins, BlackBerry’s CEO. Finally, no indication at all about pricing.

As for specs, the Q10 has a full QWERTY keyboard, 3.1-inch touchscreen display with a resolution of 720 x 720, 1.5Ghz dual-core processor, 2GB of RAM, 16GB of expandable storage, 8MP camera and a 2MP front-facing camera. In addition, the Q10 has similar styling to the Bold 9900 with a “glass fibre back.”