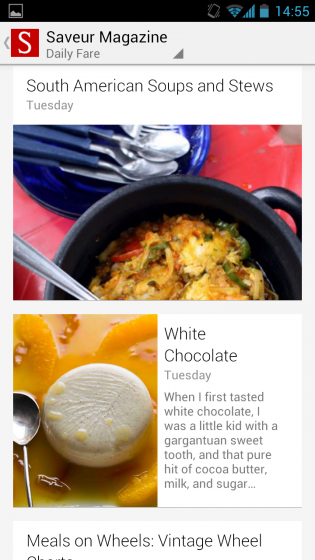 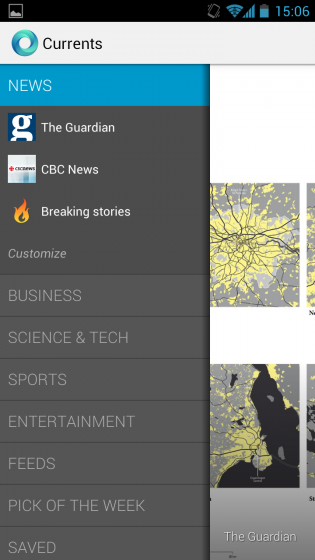 Google Currents has always been pretty, but even after the magazine-styled news reader expanded internationally and launched on iOS, it just didn’t come across as a must-have app. Not only were Flipboard, Zite, Pulse Reader and Taptu more usable, but each had some distinct advantages over the others. For example, Flipboard had its partnerships and ease-of-use; Pulse Reader had a gorgeous interface that made it easy to discover new content. Currents just was.

But with Currents 2.0, which launches today on Android, Google has revamped the interface across phones and tablets, making it far more enjoyable to read pre-populated material called Editions, and a cinch to discover new ones by dividing its partner providers into relevant categories.

You can scroll through various Editions horizontally while scanning the content of each site vertically. It may take a bit of getting used to — at first I had no clue what the heck I was doing — but after a few minutes it became second nature and allowed me to scan more news in a brief amount of time.

Google has also added a Breaking News area for its World, Entertainment, Science and a few other categories, the content of which is sourced from topics that you’ve expressed interest in, not just the Editions you subscribe to. This way you can discover new content and keep up to speed on the latest happenings in that particular area of interest.

The app has been gifted with a left-side navigation bar a la Google+, and hews more to the reading style of Flipboard than it did before. In my opinion it is a lovely amalgamation of many of the best parts of Flipboard and Pulse Reader. The only unfortunate thing about this new release is that there is no clear way to open articles in the browser, though you can save specific articles and share them using the default Android hooks.

A version for iOS is coming in the next couple weeks, says Google. Download Currents 2.0 for Android. It works great on phones and tablets.