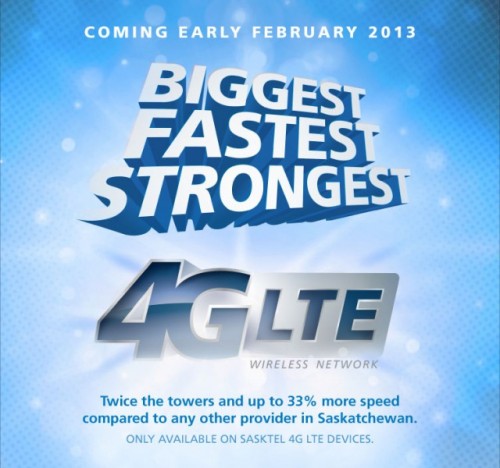 September of 2011 is when SaskTel announced that “Phase 1 of LTE deployment will begin in the fall of 2012 to Regina and Saskatoon, and surrounding areas.” This was great news for the regional carrier as it promised faster data speeds to its customers, potentially reaching over 100 Mbps download and 50 Mbps upload.

Today SaskTel declared that the first phase of their LTE rollout has been launched, but it’s only “a technical trial with select employees.” So they are still in testing. The real LTE network will go live in “Regina and Saskatoon, and surrounding communities, beginning early February 2013.” The locations listed on their site shows that Balgonie, Deer Valley, Lumsden, Pense, Pilot Butte and White City in Regina; plus Clavet, Dalmeny, Dundurn, Langham, Martensville, Vanscoy and Warman in the Saskatoon region.

In addition, SaskTel is ensuring the Big 3 carriers don’t trespass on their territory and stated they’ll offer “4G LTE in more communities in Saskatchewan than any other provider at launch and throughout 2013 the network will be extended to Estevan, Moose Jaw, North Battleford, Prince Albert, Swift Current, Weyburn and Yorkton.”

Even though the commercial rollout is slightly delayed, SaskTel has been busy releasing several LTE-capable devices. Over the past few months they’ve brought on the Samsung Galaxy S II HD LTE, Samsung Galaxy S III and Galaxy Note, LG Optimus G and the iPhone 5. Solid lineup… all that’s needed is LTE to go live.