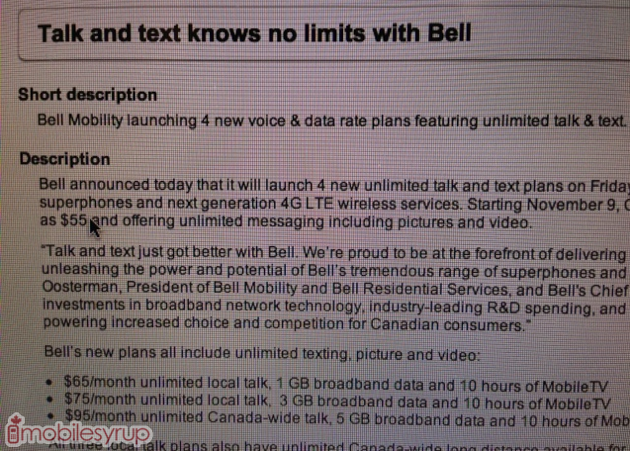 According to the internal doc we received it states that the plans start at $55 and offer “unlimited messaging including pictures and video.” Plus the following plans include data, unlimited texting, picture and video messaging:

In addition, if you want to score unlimited Canada-wide long distance you can pick it up for an extra $10/month. Voicemail and caller ID are extra.

Update: Virgin will be releasing the same plans at the same prices on November 9th, but the names are different. The Virgin Mobile doc we received stated “Oh snap! With the Holiday season upon us, we’re in the gift-giving mood and we’ve wrapped up some hot new Combo plans that include UNLIMITED CALLING options! Launching Friday, November 9th, Virgin Mobile is introducing sexy new Combo plans that include everything our Members need. Plus, they’ll be able to put up to 500 on their Virgin Mobile SuperTab!”

(Thanks tipster!)
Via: Bell