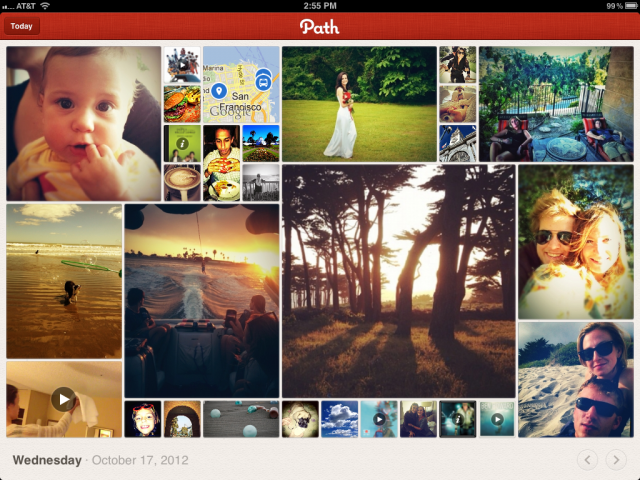 We declared Path to be one of the most beautiful apps we’d ever used when it relaunched for Android and iOS devices late last year. The company has been slowly iterating its product throughout 2012, but is staying fairly small in scope. It’s a social network, the company claims, for close friends and family. You can update your group on what you’re listening to, where you are, what you ate, and a number of other activities that could be posted on Facebook or Twitter but may seem too personal or intimate.

Path is wholly mobile, and has continuously expressed itself as a mobile-first company. To that end the iPad app is not just a scaled-up iPhone version, but takes the larger screen space and shows you updates from friends and family in an entirely new way. It’s called Moments, and looks like a mosaic, treating all the status updates of the past few hours as one moving collage. This can be viewed when the iPad is in landscape mode; turn back to portrait and you’re greeted with a larger, more spacious version of the Path interface we already know and love.

There’s also a geographic-based Reports area, which organizes your updates based on location.

The company won’t comment on whether it will bring the same treatment to Android tablets — this would look amazing on the Nexus 10 — but we’d venture a guess that they won’t. The app has been optimized for the 7.9-inch iPad mini, however, which should be exciting for those picking one up tomorrow.