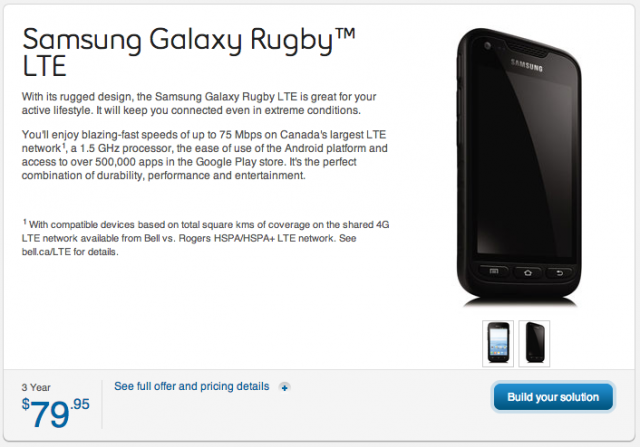 As expected, Bell has added the Samsung Galaxy Rugby LTE to their lineup. This, like TELUS’ version, is a rugged device that can handle a ridiculous amount of bruises. Quick rundown of specs of the Rugby LTE have it running Android OS Ice Cream Sandwich, a 3.97-inch display (resolution of 480 x 800), a 1.5GHz dual-core processor, 5MP camera with a 1.3MP front-facing camera, 1850mAh battery, NFC and a weights 161 grams. Pricing is currently set a bit higher that TELUS at $79.95 on a 3-year and $449.95 outright.

Update: The reason why the Rugby LTE is a bit higher priced that TELUS is because it’s Canada’s first PTT-dedicated LTE smartphone.