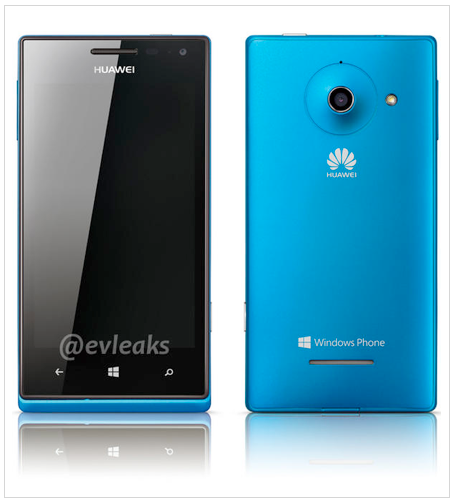 When Microsoft first unveiled Windows Phone 8 they declared that Samsung, HTC, Huawei and Nokia would be the first manufacturers to launch devices. That was back in June and since this date we’ve seen the Samsung ATIV S, Nokia Lumia 820 and 920, plus the HTC 8X and 8S.

Missing from the bunch has been Huawei. Previous rumours pointed to them announcing a WP8 device on September 25th, but that never panned out. However, today brings news. If you follow EVLeaks on Twitter you’ll know that he/she is a very reliable source for unreleased into. We’ve seen this with the Nokia Lumia devices and wireless charging pads, plus they were bang on about the HTC Windows Phone 8 devices too. So it looks like the “Huawei Ascend W1” will be their first Windows Phone 8 device as a press shot has shown up in a lovely cyan flavour.

Specs of the Ascend W1 are expected to come with a 4-inch display that has a resolution of 800×400, 1.2GHz dual-core processor, 5MP camera, VGA resolution front-facing camera, 512MB of RAM and 4GB of internal storage, packing a2,000mAh battery. No confirmed release date yet.