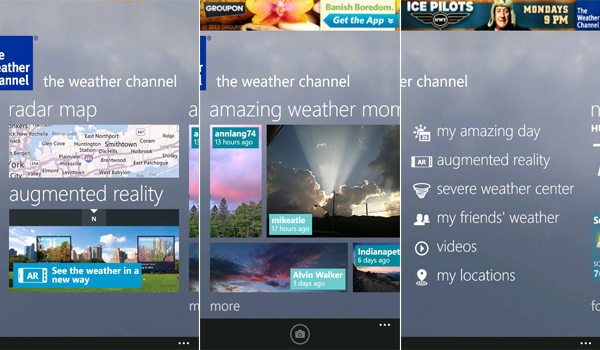 The augmented reality stuff won’t work on the Lumia 610 (we tried) but for all other Lumias it uses the camera to show you weather-related photos that users submitted using the company’s iWitness feature. We’ve had a pretty uneventful some weather-wise here in Toronto, but there have been a couple spectacular storms that would have had a lot of user-taken photos.

The other part the app is called ‘My Amazing Day’ and it revolves around custom alerts based for pollen, UV levels, running and swimming conditions and more. You can also see your Facebook friends’ weather based on where they live, and see any updates they’ve made if they use the app as well.

Weather Channel 2.0 should be rolling out today across the Windows Phone Marketplace, so check back if it’s not there and you have a Lumia smartphone.