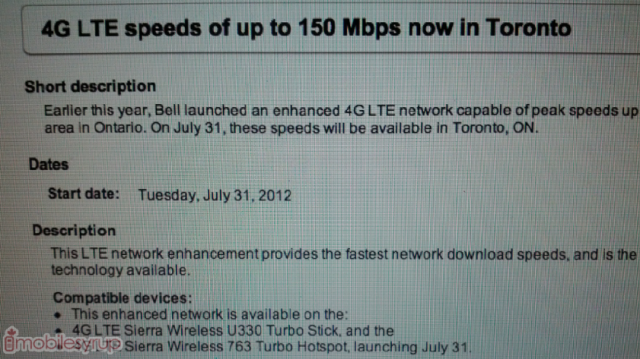 Bell’s LTE network is live across many cities in Canada, currently giving about 10 million customers access to “peak speeds of up to 100 Mbps.” Realistically the average speed will fall somewhere between 12-25 Mbps. Last March Bell also turned on their 2,600 Mhz spectrum in the Kitchener/Waterlook/Cambridge area which bumped speeds up to 150Mbps, but you could expect to hit between 18-40 Mbps. Good news for those located in the Toronto LTE coverage as starting tomorrow you’ll join the K-W-C area with 150 Mbps speeds.

The coverage map of these speeds are not live yet but will show up highlighted like K-W is above. In addition, the only compatible device is currently the 4G LTE Sierra Wireless U330 Turbo Stick, but to coincide with this LTE speed expansion will be the release of the Sierra Wireless 763 Turbo Hotspot (will be $199.95 outright).