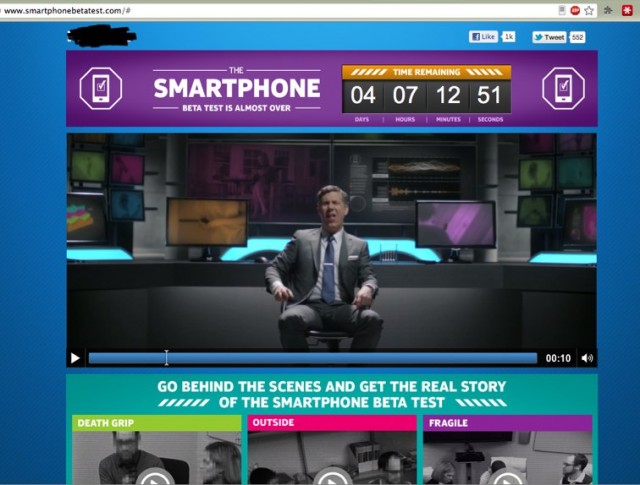 Nokia has launched what they hope to be a viral marketing campaign for its Lumia 900 phone with Smartphone Beta Test, a dig at its competitors’ numerous issues over the last couple of years. As Nokia is fond of calling its Lumia series of the phones, “the first real Windows Phones,” so too is it taking a shot at other manufacturers like Apple. In a series of “behind the scenes” videos purportedly captured from hidden cameras, the campaign takes a humorous approach to the iPhone 4’s “grip of death” problem, as well as some others.

They have employed SNL’s Chris Parnell to play what seems to be a clueless and/or impatient Nokia exec, but we’ll have to wait until April 6th to know the full details. While the campaign has not formally been endorsed by Nokia, it has its colourful handiwork all over it, including links to tweets praising the Lumia 900 over the iPhone 4S, and a logo “scratched out” on the top-left of the screen.

It will be interesting to see whether the Rogers/AT&T launch of the Lumia 900 will be able to take some market share away from iOS and Android, both of whom have a seeming “grip of death” of their own in the North American smartphone market. This is certainly Windows Phone’s time to shine, and Nokia, together with Microsoft, seems to be taking every opportunity it can get to show off its superior hardware.

Check out all the handiwork at smartphonebetatest.com