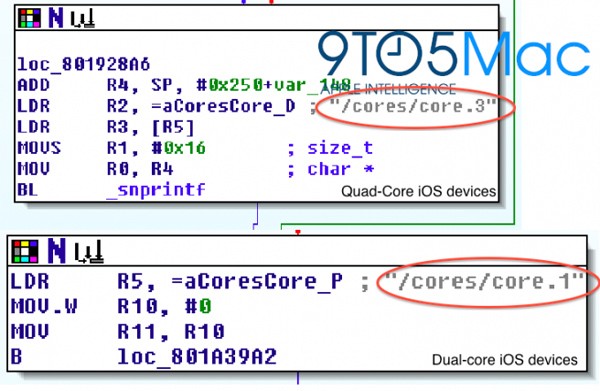 We don’t like to speculate (OK, we love to speculate) but there is good reason to believe the next iPad will have a quad-core processor.

As demonstrated by the power-sipping NVIDIA Tegra 3 chipset, more cores doesn’t necessarily mean higher power usage, as long as the IQ is there to manage it. The dual-core A5 processor inside the iPad 2 and iPhone 4S is still one of the fastest mobile chips on the market, eclipsing the graphics capabilities of even Samsung’s Exynos SoC.

Developers have now found, hidden in the deep dark depths of iOS 5.1 beta, the first clues of a quad-core A6 chipset, presumably coming in the next version of the iPad. Well, not in so many words, but the first indications of Apple testing a quad-core chip is told in the line “/cores/core.3” in the top photo.

This does not mean there will be quad-core chip in your next iPad or iPhone, but it does mean Apple is testing new hardware and that is often the next step to actually using new hardware in production devices.