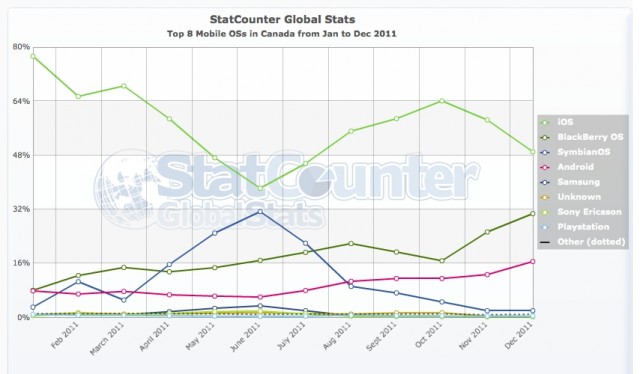 Based on some of the information we gleaned from the Pingdom worldwide statistics this morning, we discovered the source of its information: Statcounter. And while there, we decided to take a look at the current state of affairs in Canada. Now, this may not gel so well with some of the other analytics companies, Comscore and such, but it’s an interesting cross-section of the current state of affairs in the Canadian mobile market as of December 2011.

According to the charts, iOS still rules the roost with over 49% of market share, but that has been steadily dropping this year from a peak of 68% in March, though it regained from its lowest point of 38% in June. Such peaks and valleys in so short a period likely means that the polling size is rather small (minute, even) so we’ll take these numbers with a grain of salt.

RIM’s BlackBerry OS seems to have grown from 8% in January to just over 30% in December, while Android has grown from 7% at the beginning of the year just over 16% today.

The interesting spike and subsequent dip in Symbian OS is a bit confusing, but there have been some low-cost Nokia offerings launched by WIND and Mobilicity this year, but it wouldn’t have likely accounted for a 26% spike between March and June.

Nevertheless, if we look at the graph in relation to the other operating systems, it doesn’t look the same as the one we showed you this morning. iOS dominates the Canadian market, while RIM has grown quite comfortably in 2011, especially since the launch of its BlackBerry 7 devices. And while Android has gained significant market share across the world, its growth is rather more tepid here.

Check out the full graph, which provides stats from 2008 until today, over at Statcounter.