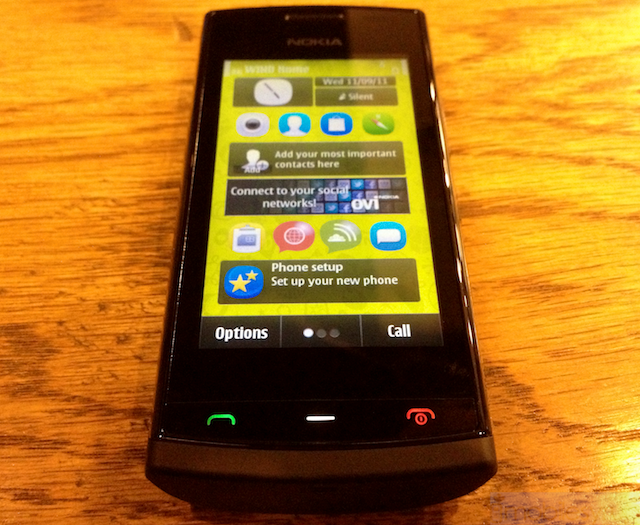 We know, we know. It’s hard getting excited for the Nokia 500’s of the world when there are so many smartphones to choose from. But everyone has a mom, brother or cousin who just doesn’t care about pixel density, megahertz and aperture size. Often, these folks want a phone to, you know, call people and, occasionally, check their email or open a web page. Rarely, if ever, does this group want to spend over $200 for a device, and, ideally wants to keep the monthly bill below $40.

These folks are a diminishing bunch, but an ample herd they still are. Which brings us to the Nokia 500. I had a chance to check out Nokia World in London this past October, and let me tell you, outside of North America the brand is still very much a big player. And it’s devices like this, in that important sub-$200 category, keeping them in business.

And while the Nokia 500 runs Symbian, it’s the C^3 Anna version “optimized” for touch screens — we stress the quotes — and purports to offer similar functionality to smartphones hundreds of dollars more expensive. Does it deliver? The short answer is Yes but there are a lot of sacrifices. Read on to find out if it’s still the device for you (or your cousin). 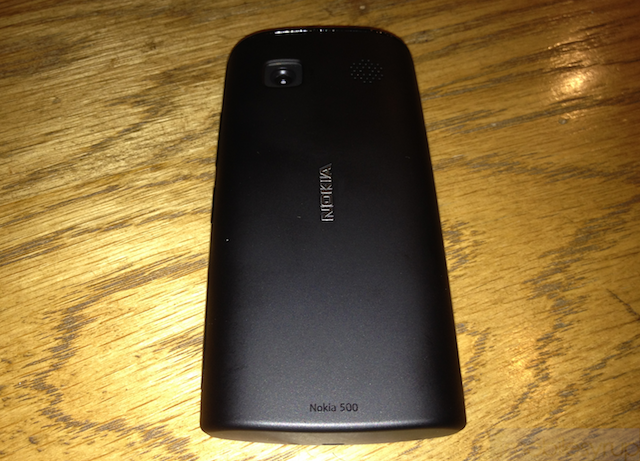 For lack of a better description, the Nokia 500 looks like a Nokia device. It’s a candybar, thick and narrow, three buttons below a deeply-recessed 3.2″ screen. There is a power button on the right side which sits below a single-button volume rocker. All the buttons are cheap, with barely any give, and feel like they could fall off at any moment. The top portion, amply-spaced, houses a headphone jack, microUSB, and proprietary circular charging port.

The back of the 500 actually fares quite a bit better, and appeals to the matte plastic lover in me: it is smooth and grippy and simple. The camera lens is deeply recessed and covered with glass that dirties very easily. The Nokia logo, arrayed vertically, stares at you warmly; “I am the last of my kind,” it seems to say. We can’t say we’re sorry for the loss.

For a 3.2″ display the capacitive screen performs well. You will rarely find such a high-density screen at this price point, and Nokia does well to furnish its three home screens with playful round icons and plenty of helpful widgets. Colours are muted; all yellows appear mustard; all reds a dappled fuschia. Nonetheless, the backlight is strong so whites are bright and accurate. Blacks are more grey than I’d like, but viewing angles hold up remarkably, and the screen performs decently in sunlight. What more could we ask for? 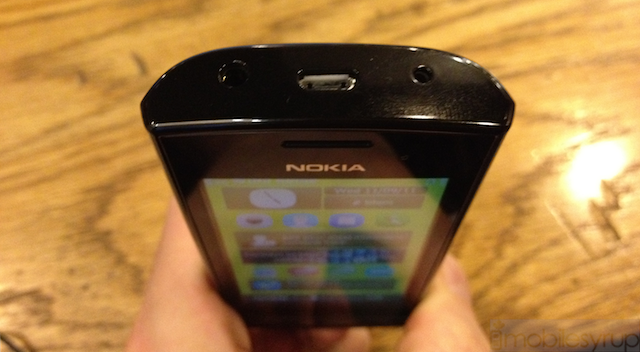 Incredibly, the Nokia 500 wipes the floor with your N8 or E7. Indeed, I noticed this the moment I booted it; it took around 30 seconds, nearly half the time of the former flagships. Symbian Anna is a capable operating system if you give it the right guts, and the 500 is able to keep up with our gestures, for the most part.

Like previous C^3 versions of Symbian, there are three home screens bedecked with widgets and icons. These widgets can be moved to any grid of three icon spaces and, like Android, can update intermittently. By default your main home screen gives you access to the most important tenets of the OS: Camera, Contacts, Nokia Store, Nokia Maps, Messages, Email and Browser. Scrolling through them or, when you enter the app drawer by pressing the middle button below the display, vertically through a list of apps, is no longer an arduous, painstaking activity. Nokia have also improved the look of its icons immeasurably, creating squared-off ovals (or rounded-off squares) where before there was just noise. 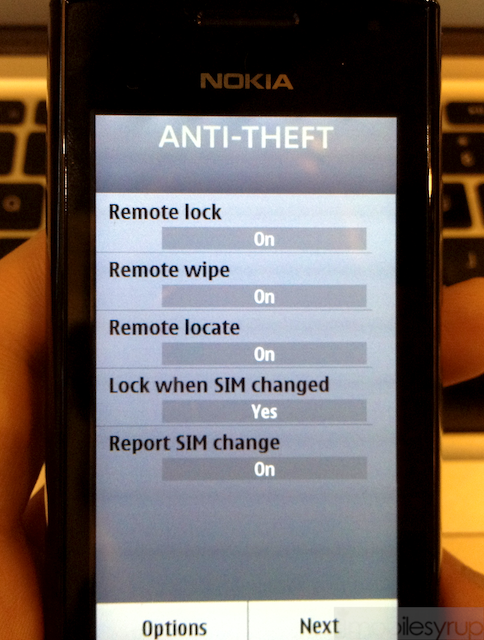 Slow and inaccurate text input has been improved in this new version, offering a full QWERTY option in portrait mode where before there was only a keypad. Predictive text has been beefed up and, as long as you go slowly, is remarkably accurate. While the narrowness of the screen offsets the portrait keyboard’s usefulness it is a dramatic improvement over S60 and the original C^3 versions of Symbian.

You also have access to Nokia Store, the evolution of the now-defunct Ovi Store. Apps can be downloaded to either the 512MB of ROM or the 2GB microSD card, and though the fare is pretty meagre — you won’t be using your favourite iOS app on here anytime soon — there are some multi-platform favourites to choose from. Mainstays like Skype, Slacker Radio, WhatsApp and, yes, Angry Birds, are available from Nokia Store and while you’re there do yourself a favour and download Swype. It will be the best texting decision you’ve ever made.

Nokia bundles some decent native apps, too: Mail for Exchange now works, which is the first time we have been able to say that, well, ever. That means Gmail, Hotmail or corporate Exchange users can sync their mail, contacts and calendars without receiving an error every ten minutes. (Yes, we’re a little bitter.) The browser has received an overhaul, rendering pages much faster and more accurately than previous versions. For those of us used to an iPhone or Android browser, this is most definitely still a WAP experience — expect wait times in minutes, not seconds — but at least Javascript no longer locks up the phone and desktop pages can be scrolled through and zoomed in on. 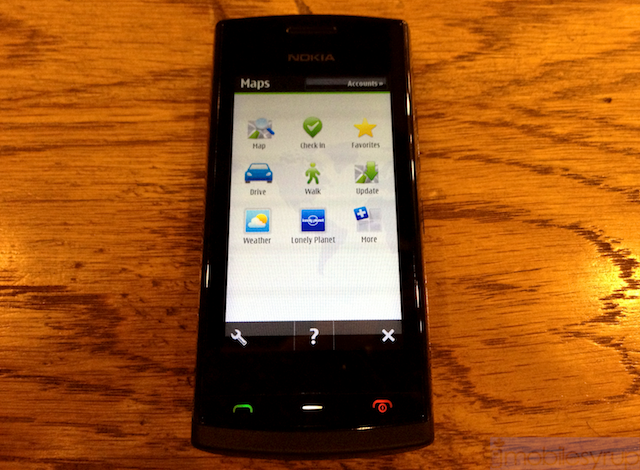 The rest of the phone’s offerings is pretty standard Nokia fare: Maps has recently been updated and for many people is reason enough to buy a Nokia device. You get free turn-by-turn navigation, offline map caching, detailed driving and walking maps, and tie-ins with tons of services such as Lonely Planet, Michelin and Trip Advisor. While these may seem to be little more than advertising in the guise of features, being in a foreign country with a context-aware Lonely Planet guide at your fingertips could be invaluable.

There is a very capable music player, which is bundled with Nokia Music, an unlimited streaming service that hasn’t quite launched yet so we didn’t get to try it out. It looks to be like a Zune Pass where you can download tracks to your device and keep them for up to 12 months. Shazam, everyone’s favourite song name hunter, is pre-installed, along with a stereo FM radio.

Social networking is covered by integrated Facebook and Twitter support. The apps are clunky, slow and frustrating, but lacking official third-party apps makes Nokia’s built-in option the most convenient. If you’re really truly sticking with Symbian for the long haul, I’d recommend the excellent (and pricey) Gravity app  for Twitter. It may in fact be the best app on Symbian as a whole but at $9.99 is also one of the most expensive. 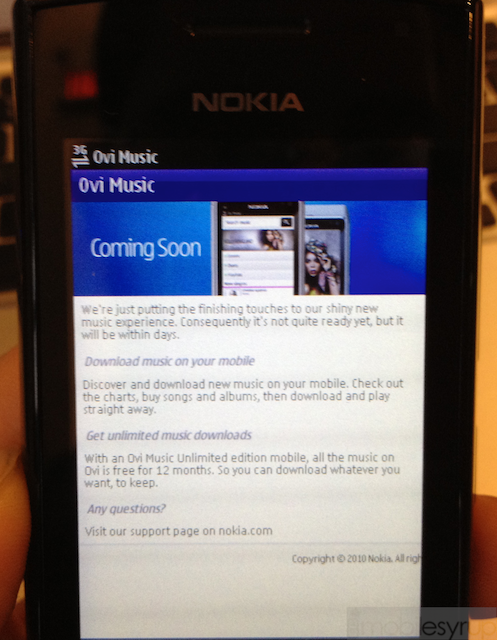 Incredibly, we’re not done with the Nokia 500’s built-in features. As with any good smartphone OS there are dictionary, calculator, voice recorder and note taking apps, as well as popular third-party voice-to-text solution Vlingo. Also hidden in there is the F-Secure Anti-Theft app which, once activated, allows you to find your lost phone through GPS or, if it’s truly gone forever, remotely wipe the memory. It also offers browser protection and attachment scanning.

There really isn’t much to say about the Nokia 500’s camera. While it claims to be 5 megapixels, and I have no reason to believe otherwise, pictures look to be of about the same quality as my Motorola RAZR. No, not this new Android version, but the one from years ago. 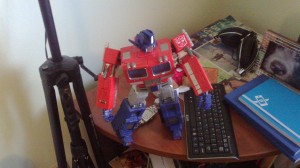 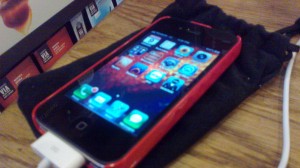 Colours are muted, detail is lacking and despite being thick enough to support an auto-focus mechanism there is none to speak of. Add to the experience a barely-usable camera UI and a “Please wait: deleting data from memory” message every time I open the app there may as well not be a camera on the back of the device. Oh, and the device takes VGA video at 15fps. Go figure. 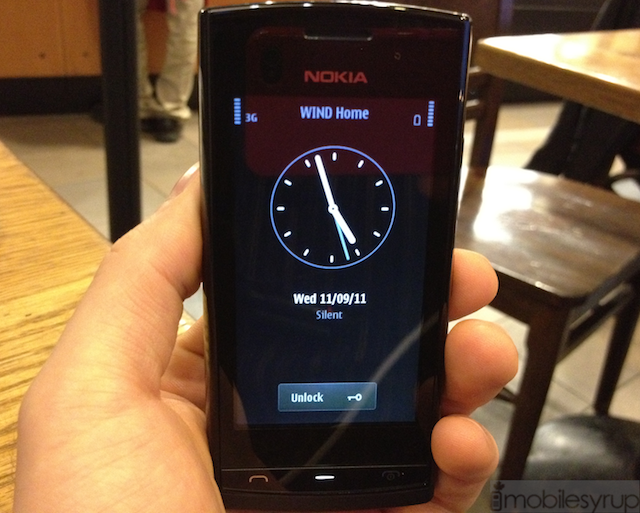 What, you mean besides the camera? Yes, Symbian Anna does have some outstanding issues. Firstly, connectivity: Symbian does not deal with multiple APNs and WiFi networks very well. Every app stores its own settings, and prioritizes them based on your last selection. Used a WiFi hotspot when last in the browser? It will attempt to reconnect to it, regardless of whether you’re a thousand miles away. Instead of dynamically selecting the best option — if no WiFi, move down the APN list until one connects — it explicitly asks you to choose, every time. It’s like a nagging six year-old.

And while the overall performance is dramatically improved over previous Symbian devices the Nokia 500 is by no means fast. It saunters along at its own pace, and slows to a crawl when you have more than a couple apps open. Forget about streaming music and browsing at the same time, or doing anything else while you’re downloading and installing an app from Nokia Store. It just won’t happen.

Speaking of Nokia Store, I continue to have problems getting apps to install. For every success there are three failures. Eventually the app will just snap to life and work, but it’s a frustrating endeavour to say the least.

WIND has done a great job picking devices that support their HD Voice protocol, and the Nokia 500 is no exception. Like the C5-04 before it, when calling another WIND or Mobilicity user with a supported device (which, admittedly, is pretty unlikely) sound quality is crisp and lag-free.

Network speed is decent, though after using LTE devices like the Raider and Optimus LTE, WIND’s network seems slow. In reality it’s operating at a crisp 14.4Mbps, but due to Symbian’s inherent speed limitations it never feels as such.

And what of the battery? Well, it’s no surprise it lasts forever, at least in comparison to most modern smartphones. I was able to eek out three full days of use from it; Nokia claims seven hours of talk time and 18 days of standby. 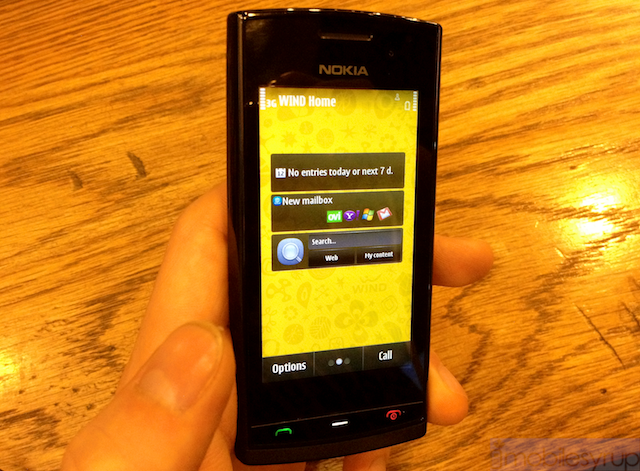 I’ve said a lot about a phone that probably won’t appeal to you. But it may, and I hope it appeals to your mom, brother or cousin. The Nokia 500 is one of the best deals currently available on WIND, and the more people that don’t buy cheap Android devices and instead opt to buy decent workhorses like this one, the better the industry will be. Let’s give credit where it’s due: Nokia has done a fantastic job catering to the budget-friendly phone buyer who just wants something that works, lasts a long time and makes really great sounding, reliable phone calls.