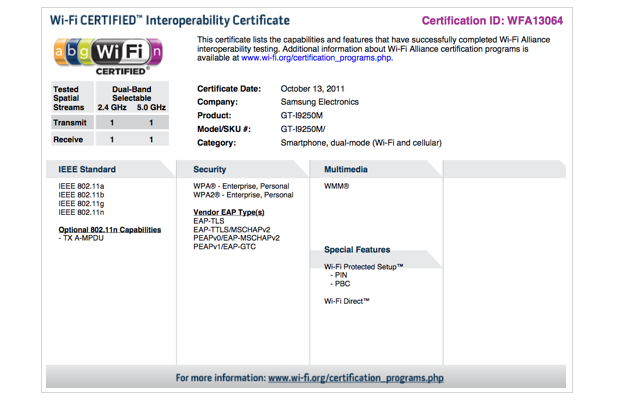 The anticipated hype behind the upcoming Nexus Prime/Galaxy Nexus is climbing and all eye will be on the official reveal of this “pure Android” next week. Although there has been no talk of this Android 4.0 Ice Cream Sandwich device coming to Canada, a tiny – and very unavoidable – hint has shown itself in the Wi-Fi Alliance database. Similar to other Samsung devices that arrived on our shores, the Galaxy S (GT-I9000M) and the Galaxy S II (I9100M), the “GT-I9250M” has surfaced in the database with a certification date of October 13th, 2011. This is this Galaxy Nexus model and “M” could mean that it’s destined for our Canadian carriers.

Hopefully good news will come to us in a few days.