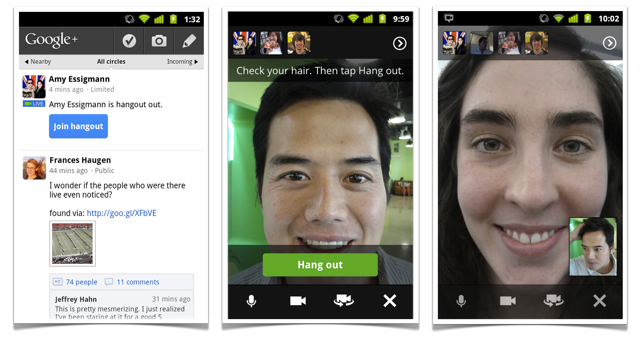 Google+ has officially launched to the public today, and with it has come a number of important improvements to both the desktop and mobile versions. An API has been released for the Hangouts feature, which allows users to start a video stream that others can join and interact with. This will bring third-party support for the Hangouts, allowing application developers to integrate the feature in their products.

Perhaps more importantly, the video sharing service has been integrated into the official Google+ Android app, with an iOS update coming soon. Like Skype or FaceTime which allows desktop-to-mobile interaction, you can join a desktop friend’s Hangout over 3G or WiFi (though you need a pretty beefy upstream speed to support it over 3G).

Further improvements to the Android app include moving it to the SD card to save space and further stream customization options. Huddle has officially been replaced with Messenger, a more appropriate name perhaps to compete with Facebook’s dedicated Messenger mobile application.

The Hangouts feature is only available to devices running Android 2.3 Gingerbread and have a front-facing camera, but luckily that includes the majority of Canadian phones released in the last year.

You can grab the update in the Android Marketplace.