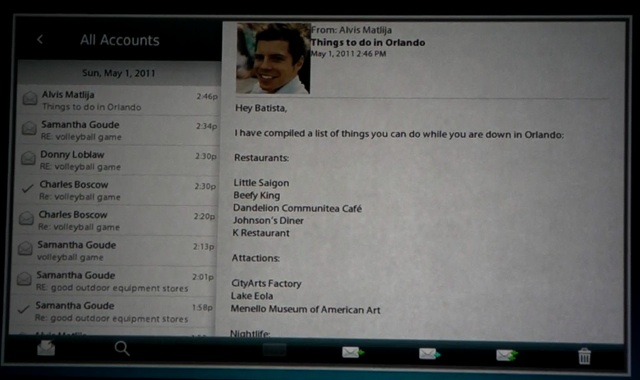 The BlackBerry PlayBook officially launched on April 19th, over 500,000 people jumped on the opportunity to own RIM’s first tablet. However, many users were wondering why they had to bridge their BlackBerry smartphone to get their email. During BlackBerry World 2011 RIM came through and gave us all a quick taste of what the email client will look like, basically exactly like it operates on BlackBerry smartphones. Execs said that the OS update will be available sometime this Summer (the Summer officially ends on September 22nd).

In the same report as Android coming to QNX-based BlackBerry devices, Bloomberg reports that “RIM plans to issue a PlayBook software upgrade in September that adds a dedicated e-mail program and BlackBerry Messenger instant-messaging applications, one of the people said. A PlayBook upgrade for the Android player may come later on in the year, two of the people said.”

Only a few more weeks!