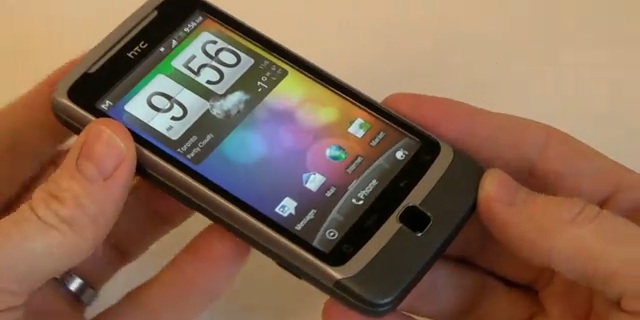 The HTC Desire Z landed at Bell earlier this week – certainly a good addition to their Android lineup. It runs OS 2.2 and comes with the new HTC Sense 2.0 UI. Checking out the device it looks very similar to the Desire that TELUS has but with a few major changes. The first is the addition of the optical trackpad and most obvious is the “pop-out” full 4-row QWERTY keyboard.

There is no doubt that the Desire Z is a beautiful smartphone. It looks nice and feels solid in your hand. The weight might be a downer at 180 grams but all the other aspects make up for it. It comes with a 3.7-inch display (resolution of 480 x 800) and is responsive. Although the processor has been knocked down from the 1GHz Qualcomm Snapdragon processor that the TELUS Desire has… the Desire Z has a 800MHz Qualcomm 7230 processor and still is incredibly fast. Around the device you have your usual buttons and ports: volume rocker, microUSB port, power, one-touch to the 5 megapixel camera (has flash and can record HD videos). In addition, this comes with a 3.5mm headset jack.

If you ever have challenges taking off the back battery cover the Desire Z has a button that you can gently push down that lifts up the brushed aluminum backing and reveals that 1300mAh battery (should last up to about 7 hours of talk time). Under the cover you’ll see a spot for your SIM and a microSD card slot. Bell ships this with an 8GB card and it can hold up to 32GB.

Probably the most talked about feature of the Desire Z is the “pop hinge” that reveals the full QWERTY keyboard. In the video I go pretty hard on it to ensure that it will last over time. The actual motion of opening up the keyboard is really smooth. The hinges are connected by a cross-bar and if for some reason it ever busts on you then it might compromise the longevity of the device. I don’t think it’ll be a problem because you’re not going to be as rough on your device as I was in the video – and it’s still solid.

In addition, Bell states the Desire Z can apparently reach peak download speeds up to 14.4 Mbps. I quickly downloaded the SpeedTest.net app and performed a several tests, changed server locations and my location and here are our findings: