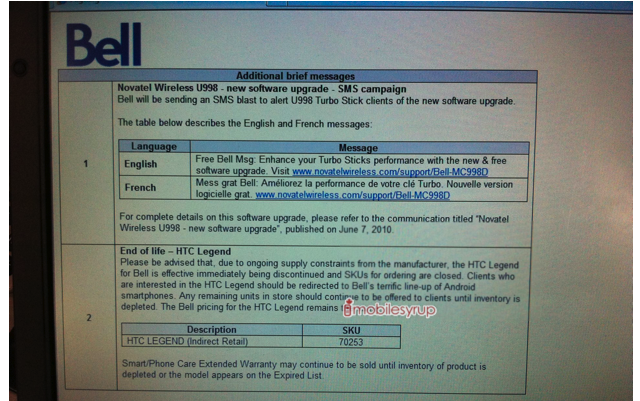 Bell released the HTC Legend a couple months ago and it seems it’s already been given the “End of life” status. According to the screenshot we received it states that “due to ongoing supply constraints from the manufacturer, the HTC Legend for Bell is effective immediately being discontinued”. There’s no explanation on what the HTC supply constraints are but  Bell goes on to say that those “clients who are interested in the HTC Legend should be redirected to Bell’s terrific line-up of Android smartphones”… so basically saying we don’t offer the Legend anymore, but do have the Samsung Galaxy S Vibrant.

There are many things up in the air here… we’re not sure if Virgin Mobile HTC Legend will be affected by this. Ironically, Virgin just increased the price of the Legend from $79.99 to $99.99 on a 3-year. Plus there’s no word on what’s going to happen to current Bell Legend clients and future OS updates.

At least the Legend lived up to its name. It came, dominated, then quickly departed.
(Thanks tipster!)