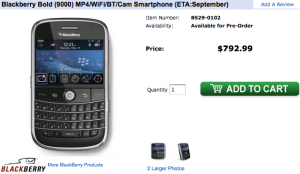 With the ongoing saga of when the new RIM BlackBerry Bold will actually launch – is it the July 29th, August 4th, 11th or 12th… Well, it seems that TigerDirect has this available on pre-order an unlocked version for a whopping $792.99 with and estimated time of arrival for September! The Bold was spotted being used by numerous celebrities (John Mayer, Lindsay Lohan, Samantha Ronson), and also been promoted at the Rogers Cup in Toronto (booth and in the program).