Oxio promises internet without ‘telco bullshit,’ but does it deliver?

After testing Oxio in Ontario for a couple weeks, the answer has mostly been 'yes' 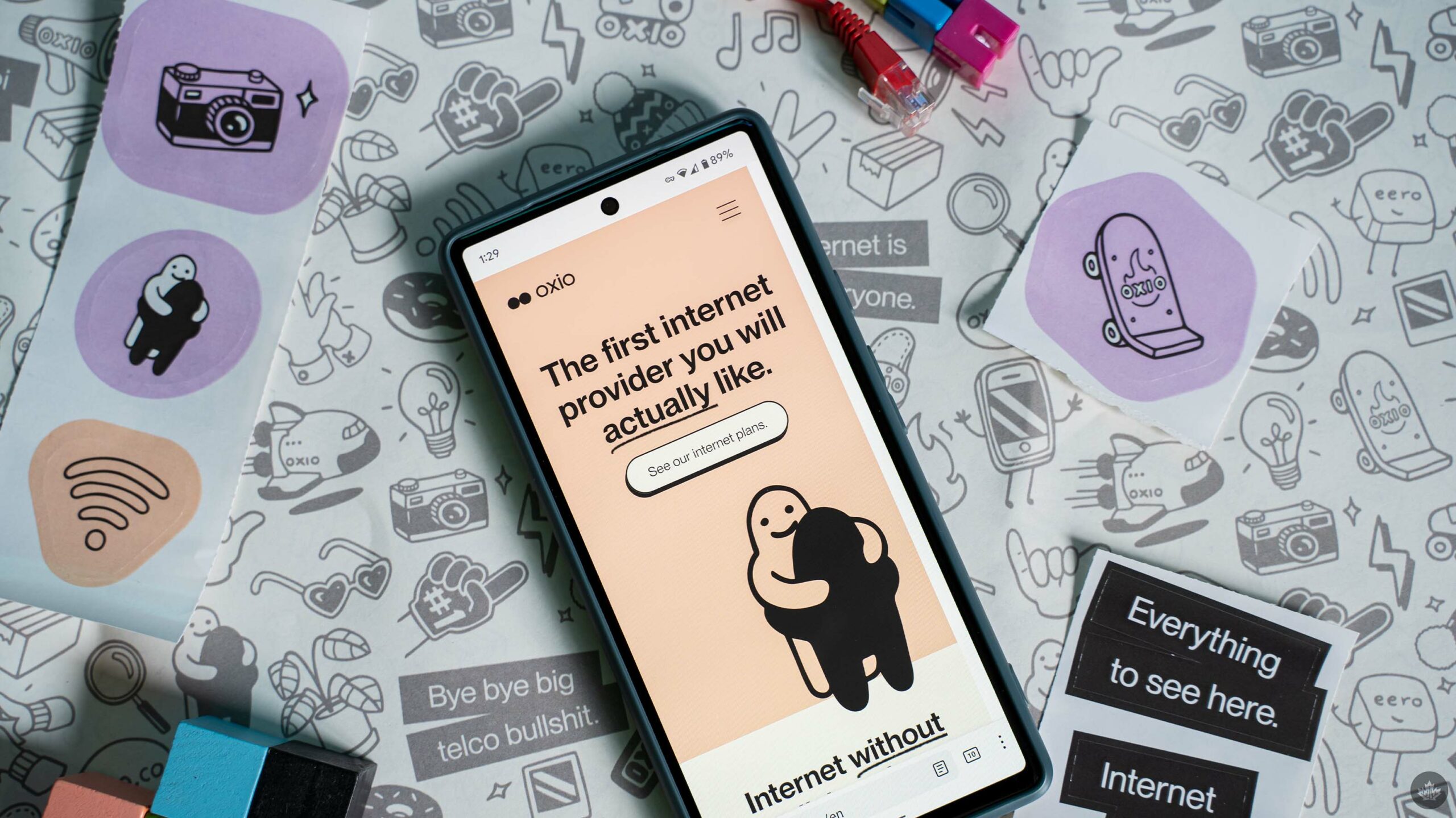 I heard about Oxio for the first time earlier this year while listening to a podcast.

The pitch didn’t quite grab my attention at first — I like to listen to podcasts while gaming, and I likely tuned out for the first few times the ad played. Eventually, I clued in that Oxio was an internet company. Specifically, an internet company in Canada and, after looking it up online, one that offered services in my area.

The first thing you see when landing on Oxio’s website is a bold claim: it’s supposedly “the first internet provider you will actually like.” The company also promises no “telco bullshit,” including contracts, unreadable fine print, and “shifty pricing.”

Interestingly, the website also says those looking for the cheapest internet won’t find it with Oxio. However, the plans on offer in my area were still more affordable than comparable plans from other providers.

Needless to say, I was intrigued. Plus, if I used a referral code from the podcast, I could get my first month free. So, I gave it a try.

Switching to Oxio was a surprisingly smooth process, although that’s likely because of where I was coming from. I’ve used TekSavvy at my apartment for years, and kudos to them for being excellent and reliable the whole time. Still, getting twice the speed for a few dollars less per month from Oxio was hard to turn down.

I live in Whitby, Ontario, and where my apartment is, both TekSavvy and Oxio run off of the Rogers network, so I already had a line into my home. As an aside, I find this incredibly funny since every time I’ve tried to check Rogers’ website for internet prices at my address, the site tells me Rogers doesn’t serve my building.

It’s worth noting that Oxio serves other provinces too. According to the company’s status page, it runs on the Vidéotron network in Quebec and on Shaw in B.C. Oxio offers services beyond internet too, but only in Quebec.

Anyway, a Rogers tech came to check the line before I could set up my Oxio modem and Wi-Fi router. My one gripe here was that I wish Oxio had mentioned to expect a Rogers tech. In hindsight, it makes sense, but at the time I almost ignored the tech’s call because the caller ID showed Rogers and I wasn’t interested in talking to some salesperson at the time. Regardless, the tech was super nice and was in and out in about 15 minutes. 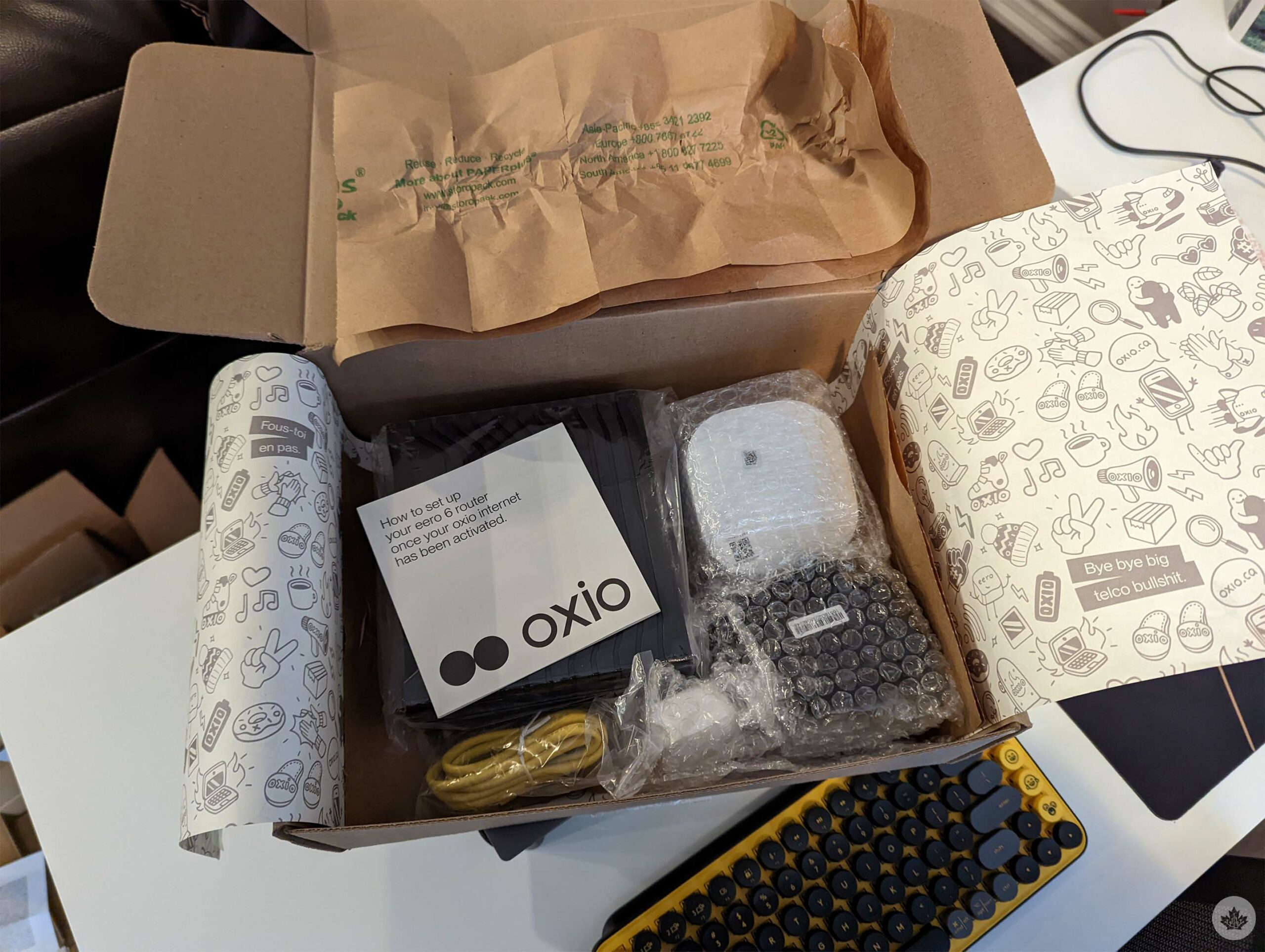 Once the tech was gone, I dug into the package Oxio had sent me with my modem and router. It also had the lovely wrapping paper, some cool stickers, plus a card detailing how Amélie from Quebec-based non-profit Groupe TAQ packed my order. Groupe TAQ helps encourage the socio-professional integration of over 350 people who live with functional limitations.

I ended up sticking with the Asus router I was using before since reviews indicate it has better performance than the Eero 6. While I skipped the router set-up steps, Oxio includes fairly detailed instructions on setting up the Eero 6 and getting started, along with several ways to contact Oxio support if you need help. Ultimately, I think most people will be fine doing the self-install. 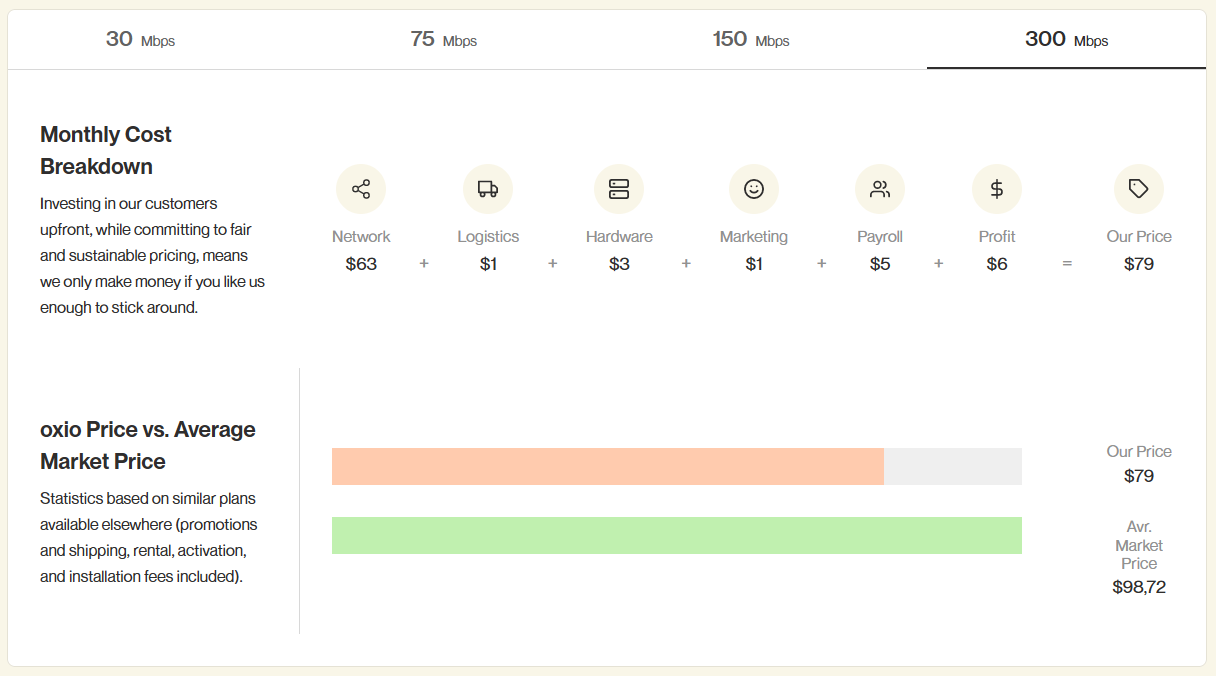 It’s been about two weeks since I got my Oxio internet up and running, and I haven’t experienced any issues so far. Granted, I didn’t expect to given that the service runs on the same Rogers line I’ve used without issue for years.

Regardless, going from 150Mbps to 300Mbps was a welcome speed bump, and getting it without paying a higher monthly cost was even better. Naturally, I’ll be paying close attention to the speed and quality of the service going forward, but I have no complaints now.

Finally, I thought it was worth highlighting Oxio’s transparency. The company displays a detailed breakdown of pricing on its website, and its blog offers deeper dives on things like employee salaries. It’s an interesting peek behind the curtain and, in my opinion, worth the read if you care about internet service provider transparency.