Users will be able to connect one phone and up to four additional devices, including WhatsApp Web, WhatsApp Desktop or Portal

A long-anticipated feature for WhatsApp is multi-device support. Earlier this year, a WhatsApp beta app hinted at incoming support for multiple devices, but now it looks like that feature will support multiple non-phone devices.

According to details from WABetaInfo, WhatsApp will soon release the first version of multi-device support in beta. To start, it will only support up to four additional devices and one phone. Additional devices include WhatsApp Web, WhatsApp Desktop and Facebook’s Portal smart display.

So, if you were hoping that WhatsApp’s multi-device feature would finally let you access your chats on two phones at the same time, you’re out of luck for now. Lack of multi-device support remains one of the biggest pain points of using WhatsApp and, aside from the Facebook ownership, is one of the main reasons I abandoned the platform — and I’m not alone in that.

While my situation is certainly unique — as a phone reviewer, I’ve usually got several devices on my desk at any given time — there are many reasons why people would want to use WhatsApp on multiple devices. For example, if you’ve got personal and work smartphones, it may be handy to have WhatsApp on both. It’s even more frustrating when you consider that other chat apps offer multi-device support, or at least make the process of switching between devices much easier. 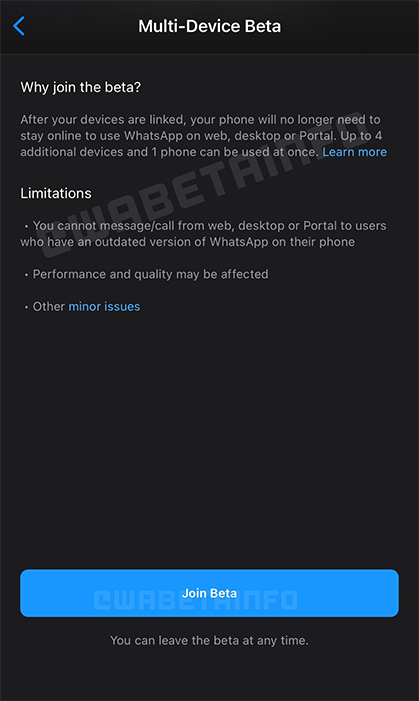 Still, at least WhatsApp is adding some multi-device features. These changes should make it easier for people to chat with friends over WhatsApp using devices other than their main phone. WABetaInfo shared a screenshot of the feature, which notes some other restrictions. First, messages and calls placed from the web, desktop or Portal won’t go through if the recipient is using an older version of WhatsApp. Further, WhatsApp warns of performance and quality degradation and other minor issues.

WhatsApp’s multi-device beta should arrive soon and, after testing, eventually roll out to all users.