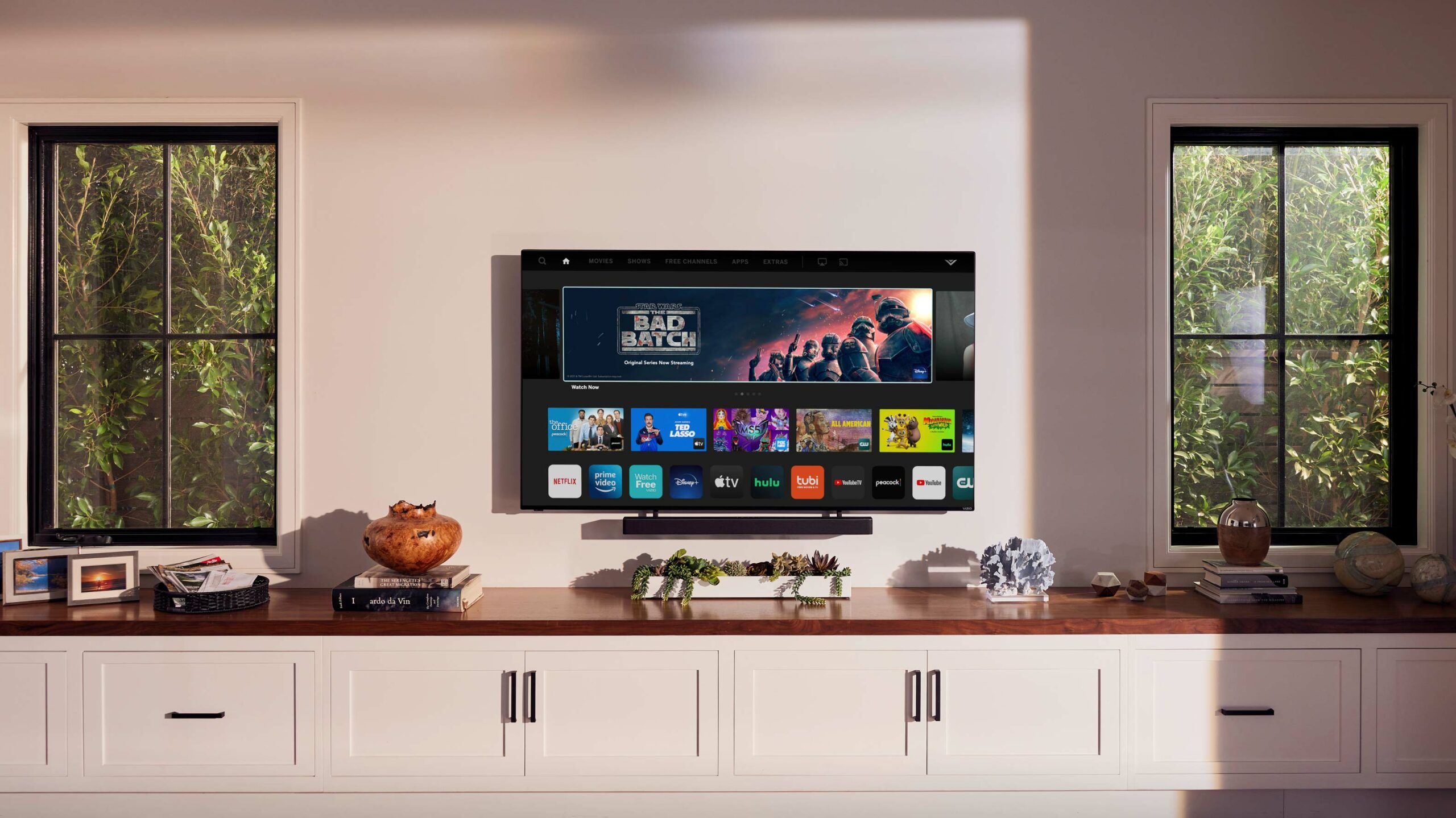 Update 02/06/2021 at 12:07pm: Vizio’s new lineup of TVs and soundbars won’t be available in Canada. The company confirmed to MobileSyrup that its products are “only available in the U.S. market,” which is a shame considering how nice some of these TVs are.

Vizio unveiled its latest lineup of TVs and soundbars with new gaming-oriented features, voice-powered remotes and, for the soundbars specifically, a whole new modern design.

Starting with the TVs, some of the highlight features include Vizio’s ‘ProGaming Engine.’ Available on select models, it adds AMD FreeSync and ‘Auto Game Mode’ to help reduce input lag and smooth framerates. There’s also HDMI 2.1 support across all of Vizio’s 4K TVs with 4K 120Hz support on its P-Series TVs.

Further, Vizio has a new Bluetooth-powered push-to-talk Voice Remote included with its V-, M- and P-Series 4K TVs. Using Vizio Voice, customers can use the Voice Remote to help with set-up, perform searches for things like the weather or sports scores, and more.

Vizio’s P-Series TVs (pictured above) lead the lineup with ‘Quantum Colour,’ a high-performance Active Full Array backlight with up to 210 local dimming zones, Dolby Vision, HDR10+ and up to 1200 nits of brightness. Plus, the P-Series sports the ProGaming Engine, supports Variable Refresh Rate (VRR) and AMD FreeSync Premium. 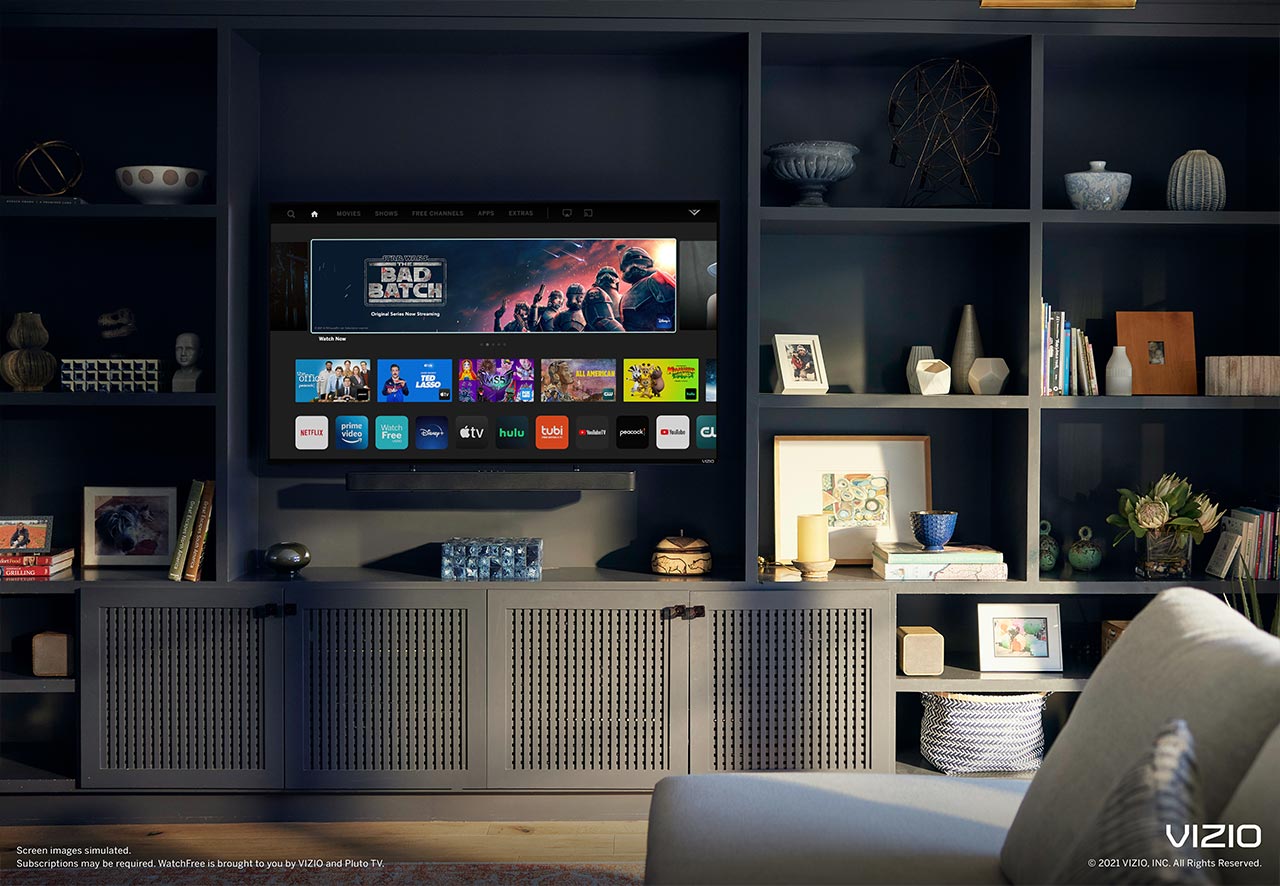 There’s also the Vizio M-Series with Quantum Colour, 700 nits of peak brightness and 32 local dimming zones. Some models sport the ProGaming Engine but are only certified for AMD FreeSync VRR at 40-60Hz. 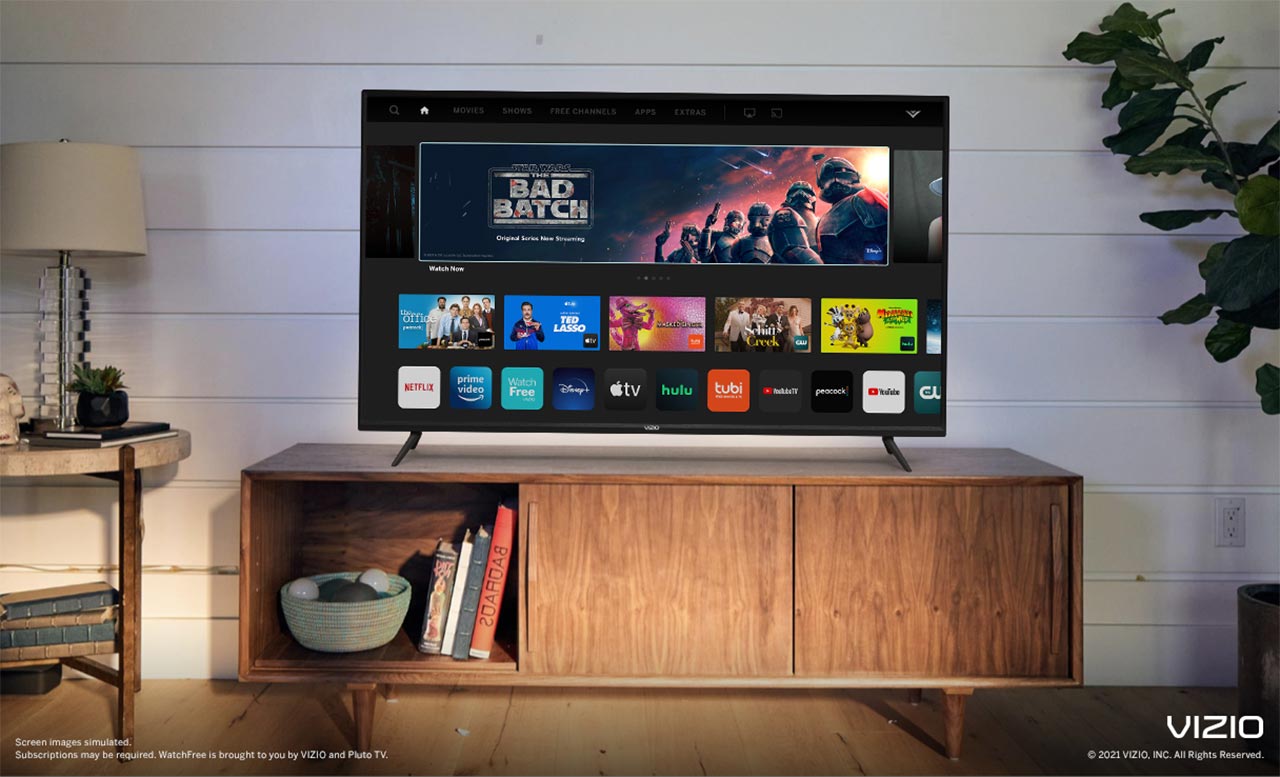 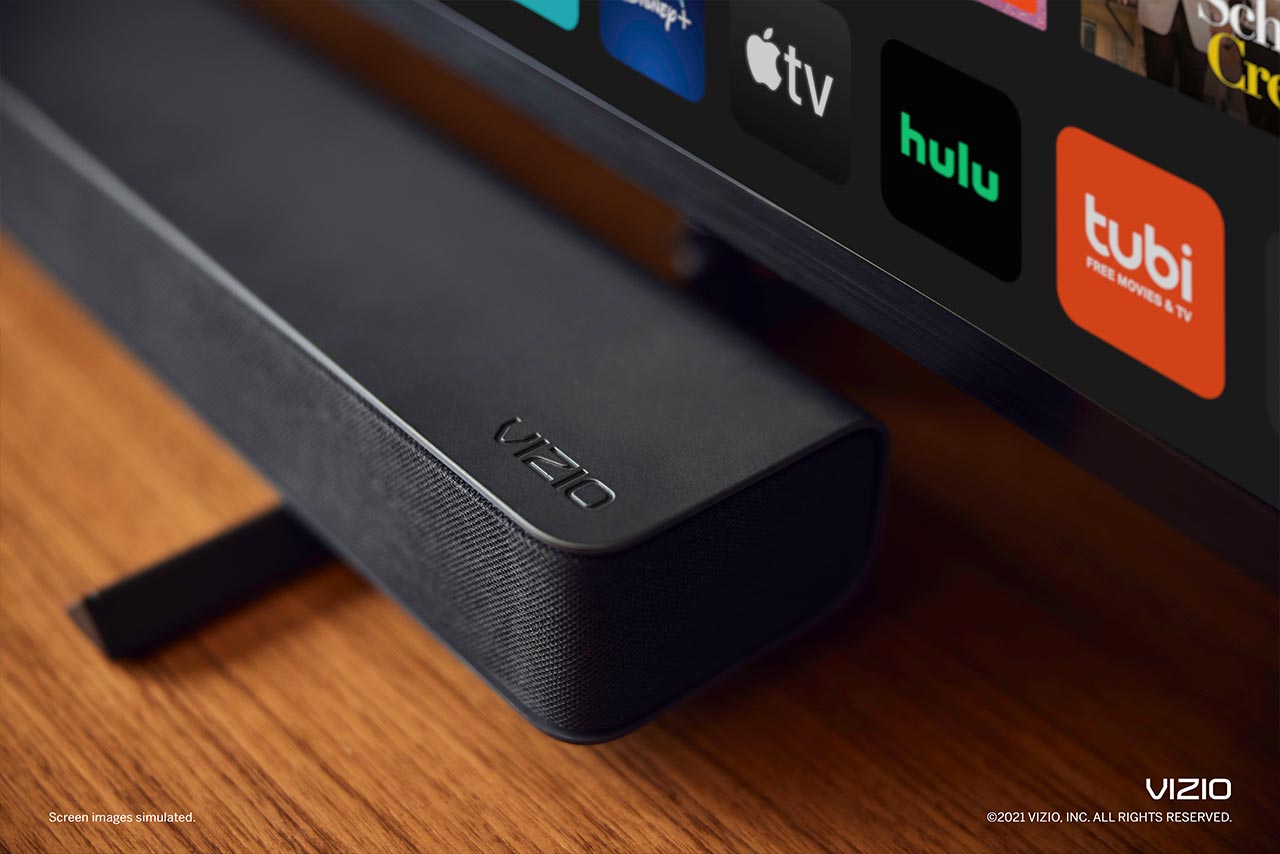 Along with a new lineup of TVs, Vizio detailed its new soundbar lineup sporting a new design that ditches fabric coverings for a textured surface. The highlight here is that the new surface is easier to clean than the fabric coverings on the company’s past soundbars.

On top of that, Vizio’s soundbars will now display their menus on select Vizio TVs when connected to them, which makes it easier for customers to adjust their sound settings. Vizio designed its soundbars to better fit on the stands of select Vizio TVs for a better, integrated appearance.

Heading the lineup is the Vizio Elevate with ‘Adaptive Height’ speakers that can detect Dolby Atmos and DTS:X signals and automatically rotate the speakers upward for overheard audio and down for superior music and 5.12 content. Vizio says its Elevate tech will make its way into more Vizio soundbars in the future. 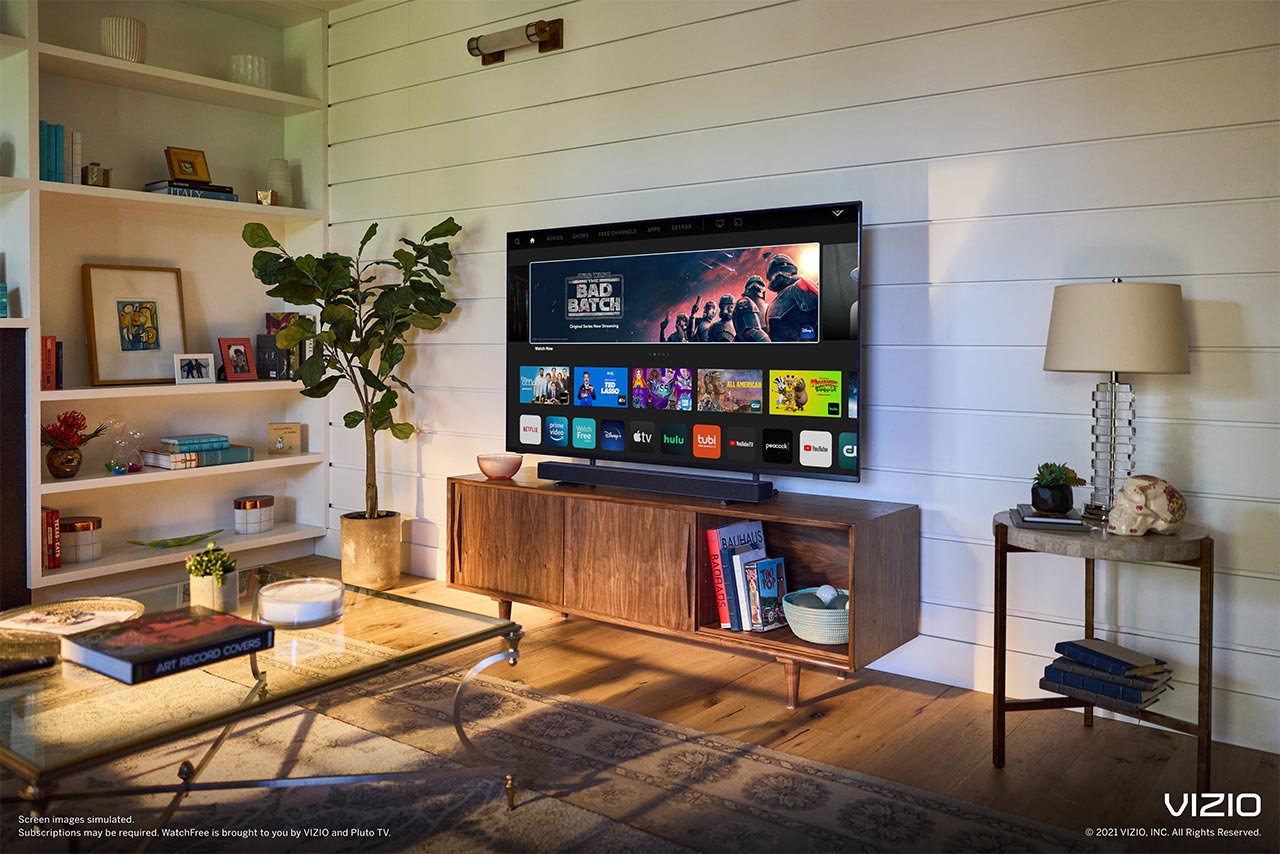 Next up is the Vizio M-Series soundbars with separate woofers, tweeters and passive radiators to provide a wider soundstage. The higher-end M-Series sports Dolby Atmos and DTS:X with dedicated up-firing speakers for better overhead sound.

The majority of Vizio’s new TVs and soundbars will be available in the U.S. in June, with some arriving in July, August or another date. For more details about the new devices, check out Vizio’s website.