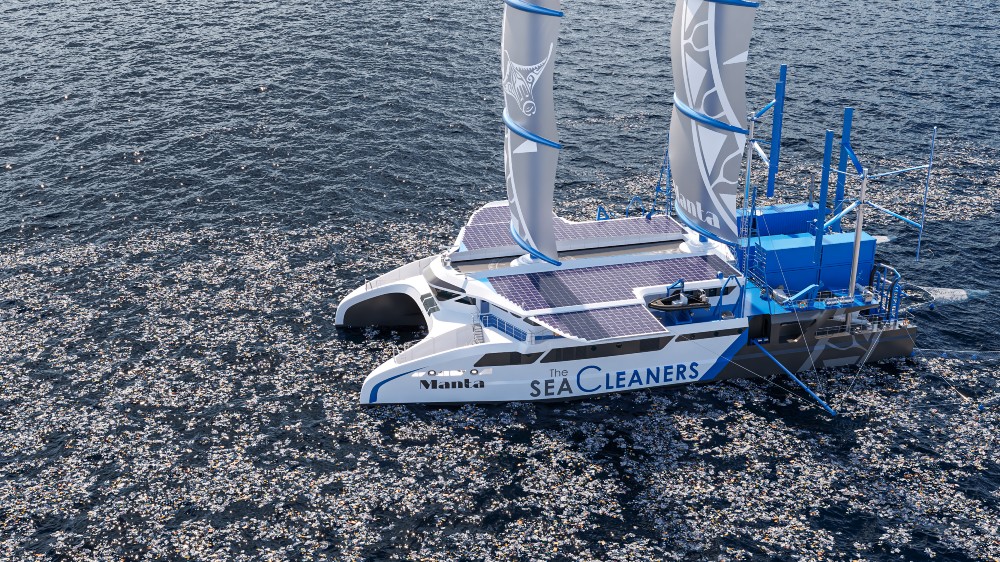 According to the International Union for Conservation of Nature, at least eight million tons of plastic end up in our oceans every year and make up 80 percent of all marine debris from surface waters to deep-sea sediments. If nothing is done about the situation, there will be more plastic waste in the oceans than fish by 2050.

French ocean adventurer Yvan Bourgnon and his team have therefore taken it upon themselves to heal the ocean slowly but surely. They’ve designed Manta, a 185-foot, plastic-eating catamaran (sailboat) powered by renewable energy. Plastic trash is literally scooped up and converted into fuel to help power the catamaran.

Bourgnon, who has years of experience racing sailboats, is the mastermind behind this operation. In addition to the plastic-gobbling vessel, he founded the SeaCleaners project in response to a rise in encounters with floating garbage fields in the ocean.

The massive sailing vessel will be the first of its kind, with the ability to collect one to three tons of plastic waste per hour and then process and recycle it. The Manta is made of low-carbon steel and has a custom electric hybrid propulsion system that allows for low-speed maneuvering for critical operations as well as waste collection, carried out at 2 or 3 knots (between 2-5 km/hr). When needed, Manta can also reach speeds over 12 knots (22 km/hr).

The sailboat also has two wind turbines, 500 square metres of solar panels, two hydro-generators under the boat and a waste-to-energy conversion unit. All of these sources of renewable energy allow the Manta to operate 75 percent of the time autonomously, without burning fossil fuel and leaving behind a minimal environmental footprint.

Bourgnon estimates that the first model will take about two years to be built with delivery scheduled for the end of 2024.

“Our hope is that hundreds of Mantas will be built around the world to help with the great ocean cleanup,” said Bourgnon in a statement given to Robb Report.

Given that Canada boasts the world’s longest coastline touching three oceans, having a Manta or two at our disposal would be great.