About 78 percent of Canadians say Huawei should be banned from 5G rollout: survey

Around 78 percent of Canadians believe that the federal government should not allow Huawei to participate in the deployment of 5G, according to a new survey conducted by the Angus Reid Institute.

This number has increased by nine percent since the institute conducted the same survey in November 2019, when 69 percent of respondents said Huawei shouldn’t be allowed to build 5G mobile networks in Canada.

“The percentage of Canadians saying that Huawei should be allowed to be involved in building the mobile network has dropped to 14 percent, down seven points from 21 percent late last year,” the report notes.

A mere nine percent of respondents believe that the Canadian government should allow the Chinese telecom company to be involved in the rollout. 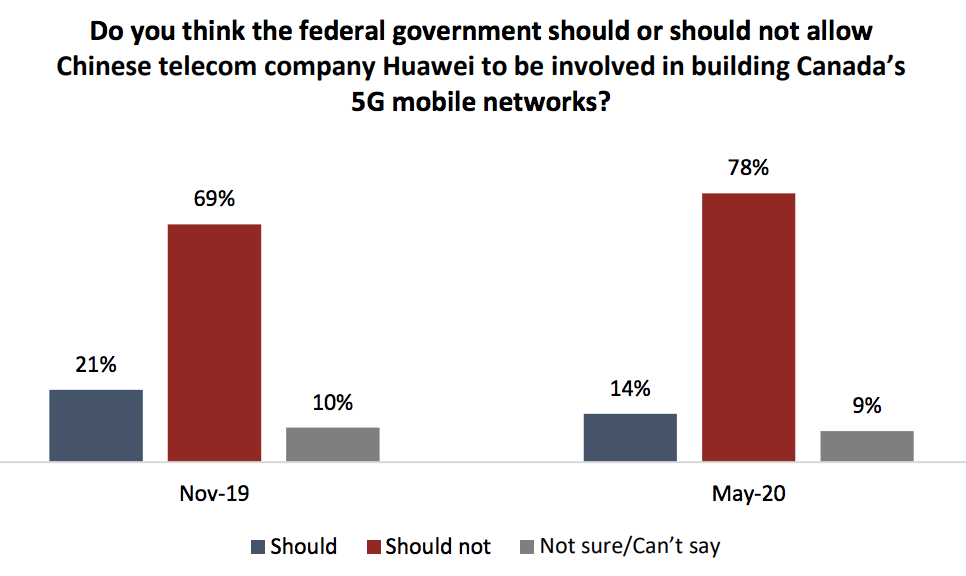 Canada has not yet decided whether Huawei will be allowed to participate. Although Innovation Minister Navdeep Bains said in March that the government will make a decision based on national interest, there isn’t any information on a potential timeline on when the decision will be made.

The U.S. has repeatedly urged Canada not to use Huawei equipment for the deployment of 5G, stating that it would jeopardize intelligence sharing between the two countries.

Tensions between Canada and Huawei arose once Vancouver authorities arrested the company’s chief financial officer Meng Wanzhou in December 2018 at the request of the United States for violating sanctions in Iran.

The Angus Reid Institute compiled this report by surveying a randomized sample of 1,518 Canadians between May 4-6th.