Innovation, Science and Economic Development Canada has released the 2019 Price Comparison Study that outlines Canadians pay a lot more for wireless services than other G7 countries.

This specific study was prepared for the government by Wall Communications, which is an economics consulting firm.

In terms of reducing wireless pricing, Innovation Minister Navdeep Bains told MobileSyrup that “we need to do more, especially in the mid-tier plans, we haven’t seen a significant price decline. The low-end and high-end plans are coming down, but we haven’t seen that with the mid-range plans.”

The study concluded that Canadians have been paying more overall compared to consumers in other G7 countries and Australia.

It notes that a ‘level three’ mobile wireless plan, which would include unlimited nationwide talk and text along with 2GB of data, costs significantly less in other countries.

“For the level three wireless service basket, the average Canadian monthly rate of $74.42 CAD is well above the average for the group of surveyed foreign jurisdictions of roughly $36. Canada ranks second highest among the surveyed countries, surpassed by Japan at $78.42,” the study found.

Further, the study also compared prices for a ‘level five’ plan, which refers to a shared plan with three phone lines and unlimited nationwide talk and text with 10 to 49GB of data.

“The level five (Family) Basket price in Canada is $205.78, again higher than all other countries. Prices in Europe and Australia are significantly less,” the study reads.

“Based on the data we have, we see that we pay some of the highest prices in the G7, and we see that prices should go down and must go down,” Bains told MobileSyrup.

The study outlines that prices in Canada declined between 25 percent and 30 percent from May to September of 2019. It should be noted that the data that was used in the report to compare Canadian and international pricing was not based on the September pricing.

Further, the study revealed that average prices from regional providers (e.g. Freedom Mobile, SaskTel, Vidéotron) were up to 45 percent lower than plans provided by the Big Three (Bell, Rogers, and Telus). The government says that although this progress is promising, the cost of mid-range plans have not moved, hence the push to lower prices.

The study reveals that for a ‘level three’ plan in Canada, the average price from the national incumbents is $76.11. However, the regional carriers’ price for the same plan averages $52.89, which is a 30 percent difference.

As for a level five plan, which was detailed earlier, the national incumbents’ price averages $189.75, while the regional carriers’ average at $166.99. This is an 11 percent difference.

“The Regionals continue to offer mobile wireless prices that are significantly lower than those of the incumbents — i.e., 34 percent, 45 percent, 31 percent, 28 percent and 12 percent lower for service basket levels one to five, respectively,” the study notes. 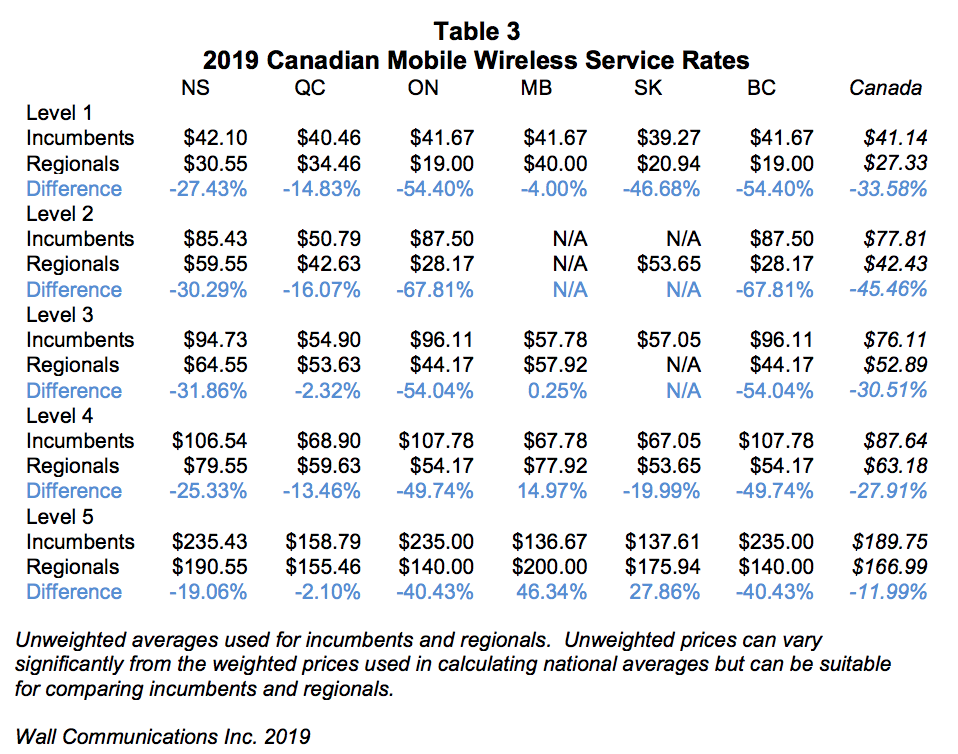 The most significant difference in pricing between the national and regional carriers is found in the ‘level two’ basket level, which is 1,200 voice minutes, 300 texts and 1GB of data usage per month.

For this category, the national incumbents’ prices average at $77.81, while the regional carriers’ average at $42.43. This is a 45.46 percent difference in pricing.

Interestingly, the study also indicated that “the lowest average mobile wireless prices were generally found in Winnipeg, Regina and Montreal for most mobile wireless service baskets — consistent with the past several years.”

The study also outlines that the difference between incumbents’ flanker and primary brand service prices are in the range of 22 percent and 34 percent lower.

Overall, the researchers found that “since 2008, when the first Telecom Pricing Study was undertaken, mobile wireless prices in Canada have generally trended downwards with CAGRs (compound annual growth rate) over the relevant period between roughly four percent and five percent.”

Update 05/03/20 7:16pm ET: The article was updated to add more information about the comparison between Canadian and international pricing.