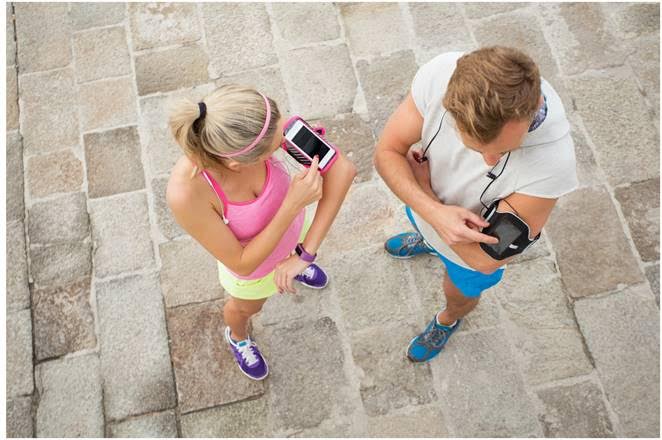 But if you’re lacking in those stern virtues, there’s a trick that makes them less than necessary on your path to self-improvement. If you can hijack your brain’s hardwired love of habits, you’ll find that hitting your goals becomes less of a grind. Here are four techniques to make healthy habits part of your life.

Ever wonder why New Year’s resolutions fail by February? Chalk it up to well-intentioned but ultimately harmful enthusiasm, which causes people to burn out before their healthy hopes become hardwired habits.

A classic example is the goal to get fit. Every January, people burst out of the gate to get in shape. They buy treadmills, sign gym contracts, or try the latest celeb-endorsed fitness craze. And after a couple of intense, palm-blistering, spine-compromising workouts, they find themselves back on the couch, nursing injuries that send them right back to the starting line.

The fix, according to James Clear, author of Atomic Habits, is to focus on “tiny actions that become consistent patterns.” In other words, don’t be so eager. Instead of going berserk in the gym on January 2nd, you’re better off doing a light ten-minute workout every day for a week, and then gradually increasing the duration and intensity of those innocuous sessions.

Easing yourself into the rhythm of a new habit will pay off way more than a few brag-worthy blitzes. Nurture the seed of a habit instead of chasing results, and you’ll find it far easier to be consistent in the long term.

New habits fall flat without enough motivation. And according to research published in the American Journal of Medicine, wearable devices like the FitBit have a worthwhile effect on motivating physical activity.

But the good news for tech lovers doesn’t stop there. A recent behaviour-change study tracking the habits of 400,000 participants in the US, UK, and South Africa discovered that combining measurements from the Apple Watch with the health-based financial incentives built into the Vitality insurance model led to a 34 percent increase in physical activity. Those big numbers are all well and good, but they really hit home when you consider that, according to health experts, that extra activity can translate to two extra years of life.

If you’ve been bitten by the “wearable” bug, you already know that counting steps, measuring sleep, and being aware of your heart rate all help keep your health top-of-mind. Even your “120 steps left this hour” notification ten minutes before lunch is enough to get you weaving between cubicles to hit your goal. Tracking everything might be overkill, of course. But if a goal is important to you—whether it’s dropping a few pounds or prepping for a half-marathon—finding a way to measure it will inject a liberal dose of motivation, which is a key ingredient in habit formation.

We’re all creatures of habit. A lot of them just happen to be unhealthy. And unfortunately, the easiest habits to form are often the ones that hurt us. But, as Charles Duhig explains in The Power of Habit, we can create positive habits by hijacking the same reward-based circuitry that propels negative habits. Substance addiction is the perfect example. “Alcoholics crave a drink because it offers escape, relaxation, companionship, the blunting of anxieties, and an opportunity for emotional release,” he writes. “The physical effects of alcohol are often one of the least rewarding parts of drinking for addicts.”

That insight is precisely why twelve-step programs are so effective at helping people overcome their bad habits. The counselling and literature alone don’t shift those behaviours—it’s the fact that people are replacing the negative habit of socializing at a bar with the positive habit of socializing at an AA meeting—and harnessing all of the neurological rewards that come from human connections.

So if you’re trying to establish a new healthy habit, look for a negative one that it can replace. And you don’t need to be a full-blown addict for this to work. As long as the new habit creates a dopamine response in your brain—whether it’s learning a new skill or going for a brisk walk—your pre-wired circuitry will make it easy.

When you start measuring your habits, it’s easy to become a number-crunching maniac. Counting calories, monitoring sleep cycles, and tracking your monthly budget can all help you form good habits, but inundating yourself with numbers can quickly overwhelm you.

To make those measurements more meaningful, psychologist Pauline Wallin suggests focusing on the smaller number, known as the “small area effect.” “Early in your progress you should pay attention to how far you’ve come,” she insists. “For example, suppose you set out to run five miles. After the first mile you’ll be more motivated to continue if you say to yourself, ‘I’ve already covered one mile,’ than if you say, ‘Four miles to go.’”

Towards the end of a goal, reverse that principle to stay fixed on the smaller number. If you’re saving for a vacation and you’re close to reaching your goal, keep an eye on how little you have left to save instead of how much you’ve stashed away. That way, the habit of saving will seem less daunting.

Whatever your goals may be, there’s no shortage of tech solutions that can help you reach them. Manulife Vitality, now available with all CoverMe health and dental insurance plans, fills that bill, and it helps you build positive habits by rewarding you for prioritizing your health. The more engaged you are and the healthier your choices, the more you can earn towards gift cards, gym and hotel discounts, and even savings on insurance premiums.