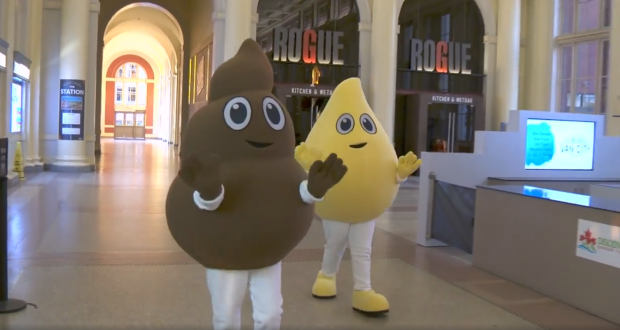 For some reason, society seems to be trying to get the poop emoji to be taken more seriously.

It wasn’t enough to get acclaimed actor Patrick Stewart to voice literal poop in Sony’s much-maligned The Emoji Movie. Now, British Columbian officials are looking towards poop to help out in an environmental campaign as well.

As part of its efforts to promote what should and shouldn’t be flushed down a toilet, officials in Metro Vancouver have, believe it or not, introduced poo and pee mascots.

“Poo” and “Pee” — who are cartoonish versions of exactly what they sound like — are being used in the region’s “Unflushables” campaign.

The new brown and yellow icons were introduced in a promotional video posted to Metro Vancouver’s official Twitter page.

When Pee & Poo visited the Waterfront #SkyTrain Station to get the message out about #wipes and other #unflushables. https://t.co/Q9I6uJFnVM

“Our sewage system does not get enough respect,” said Coquitlam mayor Richard Stewart in a promotional video, seemingly unaware of how bizarre it is to say “sewage” and “respect” in the same sentence. “We really have to, as consumers, understand that what gets flushed doesn’t disappear… we only want people to flush the pee and the poo.”

“It’s a campaign about what not to flush,” said Larina Lopez, director of corporate communications, in the video. “We focus on seven items, namely wipes. That’s the most confusing one for people. That one has ‘flushable’ actually on the product.”

What do you think? Is this a crappy way to raise awareness or are you relieved to see officials thinking outside of the box? Let us know in the comments.